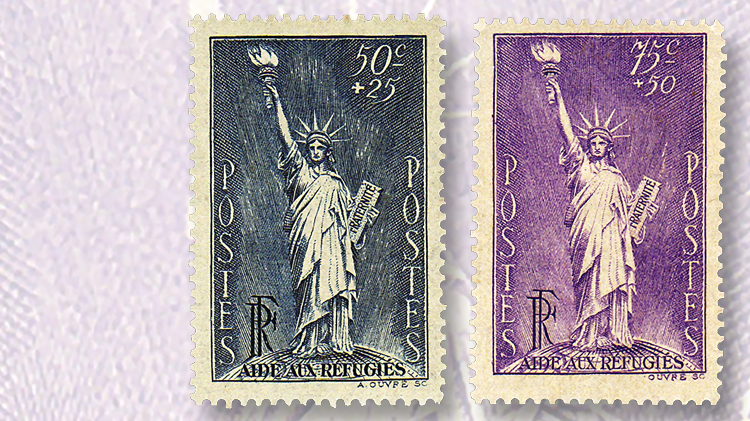 France celebrated the 50th anniversary of the dedication of the Statue of Liberty with these two semipostal stamps. The tablet in her left hand has been modified to read “fraternite” (fraternity), the third word in the French national motto. The surtax wa 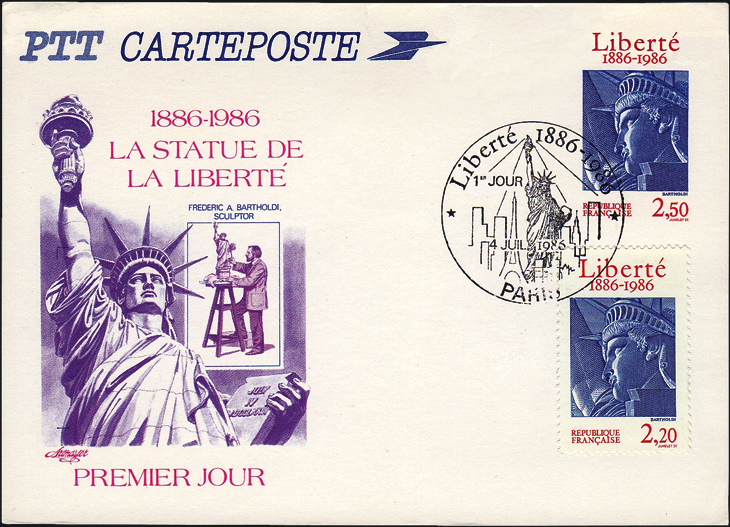 The centenary of the Statue of Liberty was commemorated with a stamp and a postal card, shown here with a first-day cancel. The cachet picturing Bartholdi and the statue was added to the card. 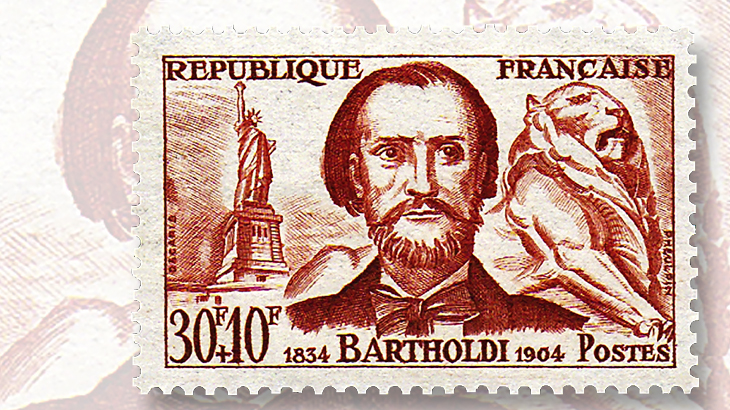 Sculptor Frederic Bartholdi lobbied for the Statue of Liberty and then created it when funding was secured. 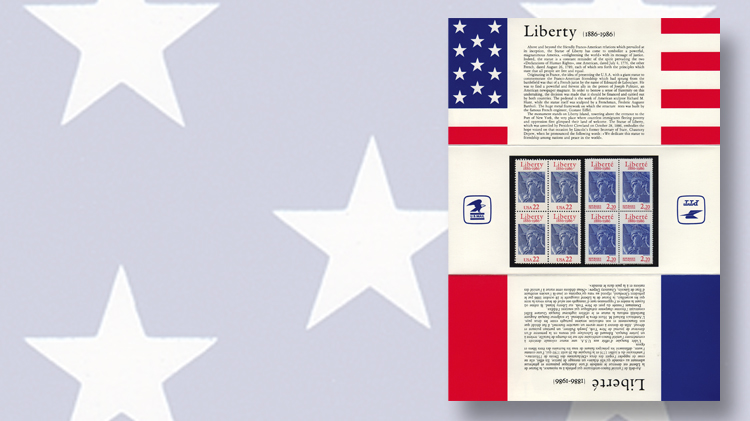 The inside of the folder includes a block of the French and American stamps with text describing the history of the statue in both English and French. 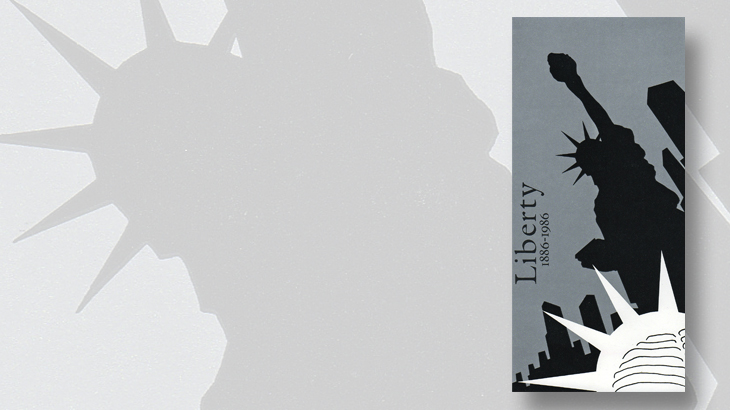 The French and U.S. postal services created a commemorative folder to hold their joint issue. The U.S. front panel is shown here; a similar panel for France inscribed “Liberte” is not shown. 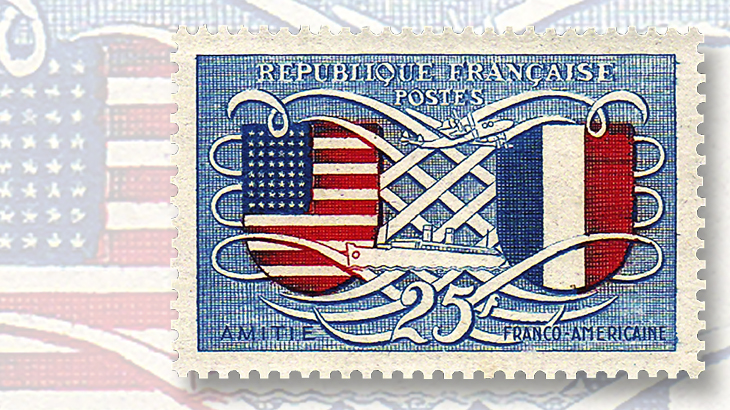 As France recovered from World War II, the ongoing friendship with America was noted on this stamp. 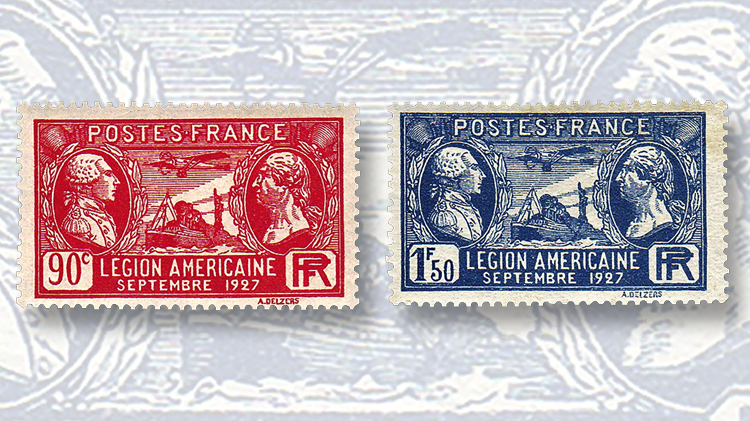 After the United States helped defeat Germany in World War I, France honored the American military by hosting the American Legion Convention in 1927. France issued two stamps for the convention. 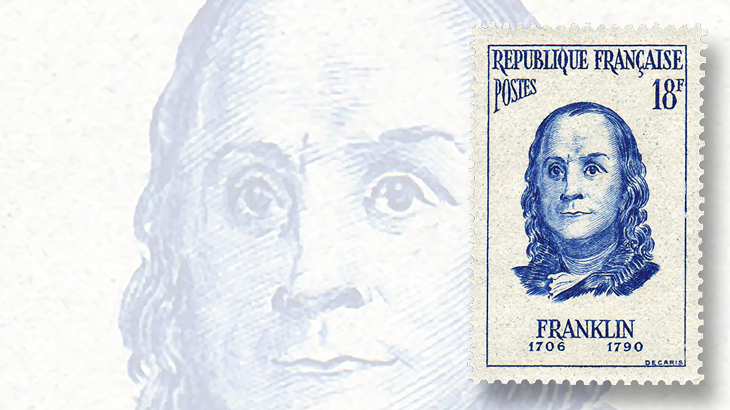 Benjamin Franklin represented America in France from 1776 until 1785, helping to solidify relations between the two countries. 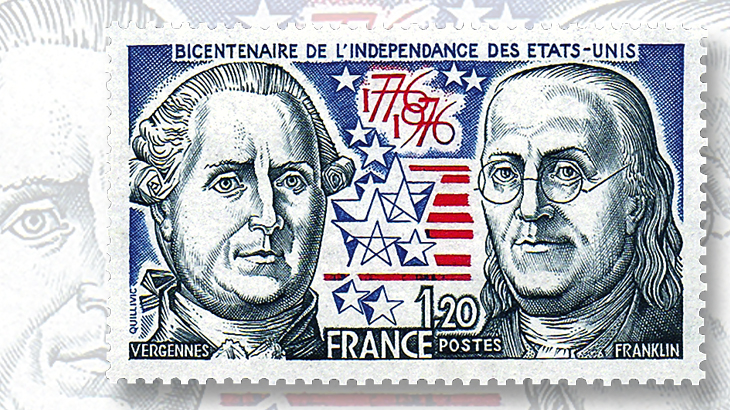 Franklin also appeared on this stamp for the bicentenary of the American Revolution, along with Count Vergennes who encouraged French support of the American colonies.
Previous
Next

After supporting the 13 colonies during the Revolutionary War, France’s relationship with the United States had its ups and downs in the next century as the United States switched its allegiance from France to Great Britain and back several times.

The United States formally allied with both countries during the two world wars, and both France and the United States are key members of the North Atlantic Treaty Organization (NATO) that was founded in 1949.

The first stamps marking the friendship between France and the United States were issued Sept. 15, 1927 (Scott 243-244). These stamps commemorated the American Legion Convention held in Paris that year.

The American Legion is a veterans organization founded in Paris in 1919 by members of the American Expeditionary Forces. For the 10th anniversary of the American entry into World War I, the French government wished to express its gratitude to U.S. soldiers and invited the Legion to hold its convention in Paris. Over 30,000 Legionnaires, their wives and guests attended.

In a nod to France’s assistance during the American Revolution, the stamps feature profiles of George Washington and the Marquis de Lafayette. Also pictured are the SS Paris, a new French luxury ocean liner, and Spirit of St. Louis, the plane used by Charles Lindbergh on the first solo nonstop trans-Atlantic flight from New York to Paris earlier that year.

The most well-known symbol of France’s relationship with the United States is, of course, the Statue of Liberty, so it is no surprise that it appears on French stamps.

Edouard Rene de Laboulaye, a French law professor, politician and president of the French Anti-Slavery Society, conceived the idea for the statue in the late 1860s. His motivation is not entirely clear, but it appears to be some combination of recognizing the Union’s victory in the U.S. Civil War and the abolition of slavery in the United States, along with inspiring the French people to get rid of their monarchy once and for all.

Laboulaye discussed his idea with sculptor Frederic Auguste Bartholdi, who was enthused about it. In 1871, after Emperor Louis Napoleon III was captured during the loss of the Franco-Prussian war, the Third Republic of France was established. This allowed Bartholdi to lobby for the statue, which he would create, in both France and the United States.

In 1880, after funding was arranged and design work was done, Bartholdi brought on engineer Gustave Eiffel to build the infrastructure of the statue. After the United States provided a pedestal on Bedloe’s Island (now called Liberty Island) in the New York City harbor, the statue was dedicated Oct. 28, 1886.

The 50th anniversary of the Statue of Liberty was celebrated with two French semipostal stamps (Scott B44-B45). The surtax was used for the aid of political refugees.

Bartholdi was honored on a semipostal stamp (Scott B335) issued in 1959, on the 125th anniversary of his birth. The stamp features his portrait with the Statue of Liberty and the Lion of Belfort, which symbolizes the French resistance during the Franco-Prussian war. The surtax was donated to the Red Cross.

The centenary of the Statue of Liberty was noted with a single stamp (Scott 2014) and a postal card, both using the same design of a close-up side view of Liberty’s face. A combination first-day card is shown nearby.

The French stamp was part of a joint issue with the United States, which issued a stamp with the same design (Scott 2224). Both were issued July 4, 1986. The postal services also sold a souvenir folder containing a block of four of each issue and text in French and English.

In 1949, France was recovering from World War II and was a beneficiary of the Marshall Plan, by which the United States was aiding the recovery of Western Europe. On May 14, France issued a single stamp (Scott 622) to honor Franco-American friendship. The stamp pictures shield-shaped flags of both nations intertwined by a ribbon. Between the two flags are an airplane and a ship, symbolizing the commerce between the two countries.

In 1956, Benjamin Franklin was recognized (Scott 814) as part of a set of six stamps honoring foreigners who lived and contributed to France. The stamp was designed and engraved by Albert Decaris, who gave Franklin a rather unusual facial expression.

Franklin played an important role in cementing the French alliance with America during the Revolutionary War. In December 1776, Franklin went to France as commissioner for the United States and then was appointed ambassador in 1778. He served in that post until 1785 and then returned to the United States.

Twenty years later, Franklin also appeared on a stamp marking the bicentenary of the American Revolution (Scott 1480). He is pictured with Charles Gravier, the Count of Vergennes. Vergennes was a statesman and diplomat who became foreign minister for King Louis XVI in 1774. He encouraged French support for the American colonies as a way of weakening Great Britain and getting revenge for the Seven Years’ War.

Both France and the United States have benefitted from their friendship over the centuries, so it is not surprising that this relationship has been represented on many postage stamps.