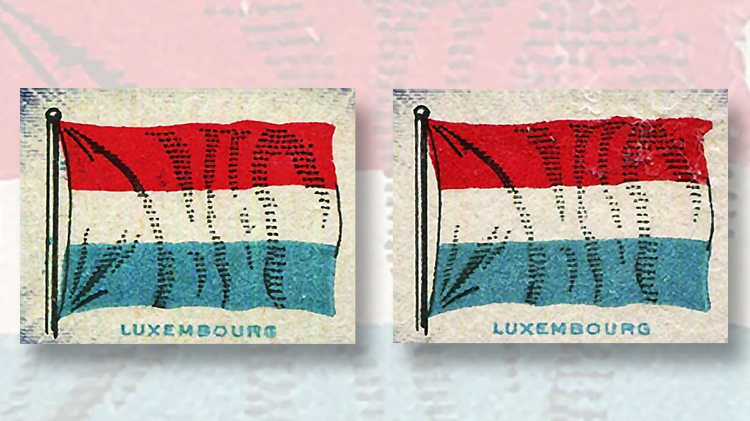 It’s fun to look for Overrun Countries printing varieties. The left close-up of a 5¢ Luxembourg stamp pictures a normal flag. At right is a variety the author calls “long nose”: a protuberance at the top-right corner of the red stripe of the flag. 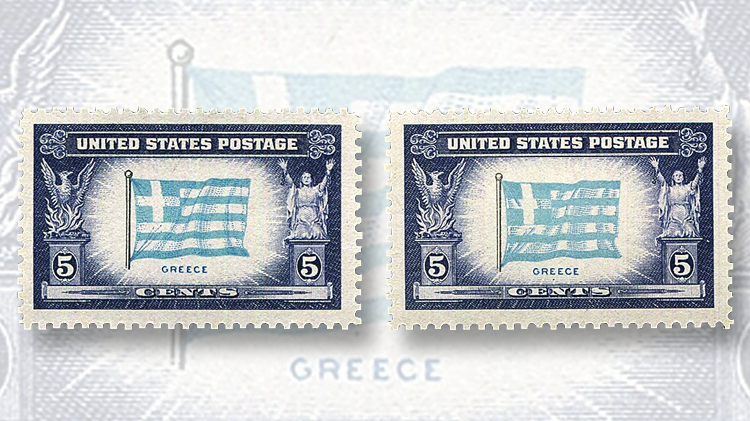 The normal printing of the 5¢ Greece stamp (Scott 916a, left) features dark blue shading over pale blue stripes. At right is a Scott-unlisted variety of the reverse printing (916) that shows a double impression of the pale blue shading. 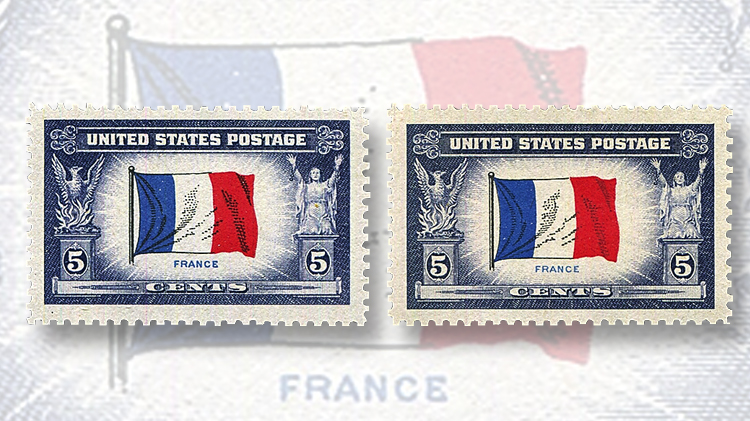 The 5¢ France stamp at left shows the normal printing sequence of the flag colors, with the black shading lines on top of the red and blue stripes. At right is a partial reverse printing: red over black, and black over blue.
Previous
Next

One of the first sets of United States stamps my father bought me was the 1944 5¢ Overrun Countries (Scott 909-921). This was the beginning of my U.S. stamp collection.

I never forgot seeing the set in the window of a stamp store in Brooklyn, N.Y., selling for $1.

In 1989, I bought my first Scott Specialized Catalogue of United States Stamps and Covers, and it opened a new world of varieties to me.

It was also the first time that I read about the reverse printings of the Overrun Countries series. However, with no time to go to  stamp shows I had very few opportunities to search for these varieties.

That all changed when I discovered stamp auctions on eBay. This was a great way to buy stamps and fill the spaces in my album.

Ebay allowed me to see what I was trying to buy. I have always tried to find new ways to keep my U.S. stamp collection alive and exciting, and online auctions were the way to do it.

I used eBay to search for reverse printings of the Overrun Countries. At the time, dealers were offering these varieties at prices anywhere from $50 to hundreds of dollars.

Looking at the comparisons that were shown on the auction sites got me thinking. Could I tell the difference between a normal printing and a reverse printing by looking at images online? Yes, I could. Not with 100 percent certainty, but good enough.

The original color printing sequence for these stamps is not known for certain. The American Bank Note Co. refused to release printing information for this series, stating that their new printing press had secret proprietary components.

Therefore, the first printing sequence for the stamps, as well as the quantity printed of each combination, is not known. The normal printing order is considered to be black ink printed over the colors of the flag (red, blue, and/or yellow).

A reverse printing of colors has the black ink under the other colors. Two exceptions are Greece and Korea.

Korea has normal printing — gray over light blue — and reverse printing of light blue over gray.

It is believed that ABNC experimented with the color sequence so as to produce the best image. All varieties were satisfactory enough to pass inspection, and so rather than destroy any, all were released.

I started searching every set offered on eBay. If the seller didn’t provide a clear picture or if the image could not be enlarged to see details more clearly, I disregarded that set.

I also disregarded multiple lot offerings because there was no guarantee what you would get.

Lots offered had to state “what you see is what you get.”

The easiest reverse-printing variety to spot was France (Scott 915). Greece (916) is also easy to identify. Others were a little more challenging.

Pictured nearby are two France stamps. On the left is a normal stamp, with the black shading printed on top of the blue and red stripes of the flag. A partial reverse printing (red stripe over black shading, and black shading over blue stripe) is shown at right.

Also illustrated here are an example of a normal Greece stamp (Scott 916a), left, that shows the shading over the flag stripes, along with an unlisted variety of the reverse printing (flag stripes over shading, Scott 916) that also shows a double impression of the shading.

I knew from catalogs and online offerings that other variety types existed. I started examining each stamp I purchased more closely.

I started with a 10x magnifying glass, and then a few years later I bought a 40x microscope. Before long, I had hundreds of Overrun Countries sets. The number of varieties I found was astounding.

I made my own stamp album for each of the countries. Without working hard, I found multiple examples of all the reverse printings, a few double impressions, and more shade-line varieties than can fit onto a two-sided album page.

There are broken flag pole varieties, torn flags, and different color shadings in the flags and in the country names.

Illustrated here are close-ups of the flag on the Luxembourg stamp. A normal flag is shown at left.

On the right is what I call the “long nose” variety, which shows a noticeable extension of the corner of the red field of the flag at top right.

There are so many varieties and most can be seen with the naked eye, making it that much easier to find online.

I knew most of what I was finding would not be found in a standard catalog, so I went online and posed questions to other collectors.

I contacted the American Philatelic Research Library for any publications that would help me in my efforts. I found that little research has been done on these stamps.

Therefore, I decided I would write a book on each of the stamps in the series. In researching and writing about stamps, I found another way to keep stamp collecting alive for myself.