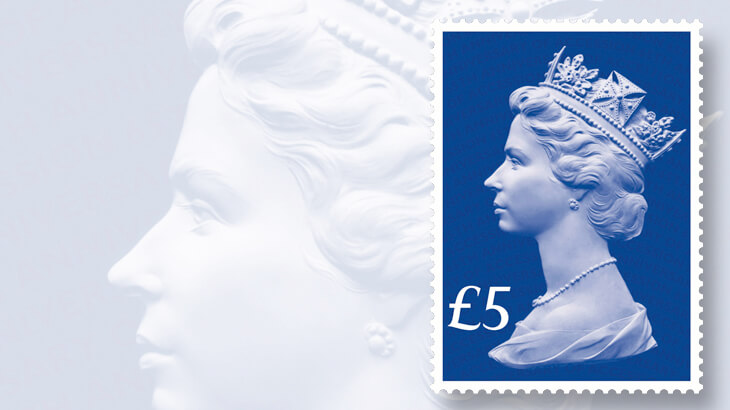 The sapphire jubilee of Queen Elizabeth II was marked Feb. 6 by a royal gun salute and a new postage stamp from Great Britain’s Royal Mail.

The queen ascended to the throne Feb. 6, 1952, upon the death of her father, King George VI. She is the only British monarch to celebrate a sapphire (65th) jubilee, because she surpassed Queen Victoria as Great Britain’s longest-reigning monarch Sept. 9, 2015.

As reported in the Feb. 13 issue of Linn’s, page 14, the new stamp is a sapphire blue £5 definitive (regular-issue) showing the bas-relief portrait of the queen by Arnold Machin, with typography by Jeffery Matthews.

Printed by International Security Printers by gravure, this high-denomination definitive measure 30 millimeters by 41mm and is perforated gauge 14 by 15. The stamp was produced in panes of 10.

Other products being offered in conjunction with the new sapphire blue Machin stamp include first-day covers, postmarks, and a presentation pack containing the stamp and a history of Machin definitives, starting with the first design essays in 1965.

To order the stamp and related products, click here.