Then and now: How worldwide stamp collecting costs have changed 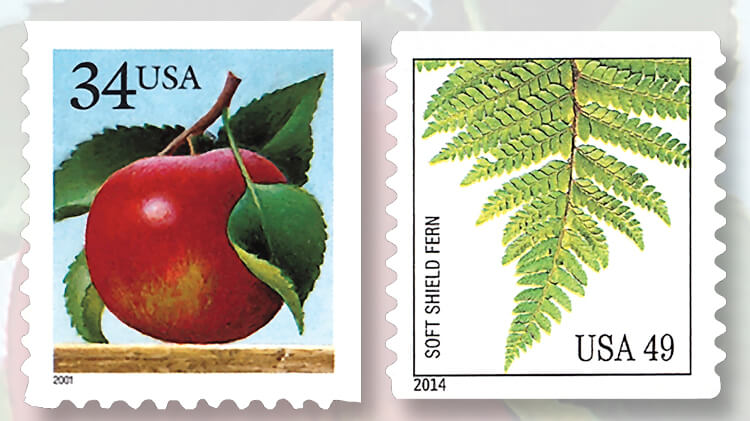 In 2002, the standard postage rate in the United States was 34¢, compared to 49¢ today, illustrated here by Apple and Fern definitives. 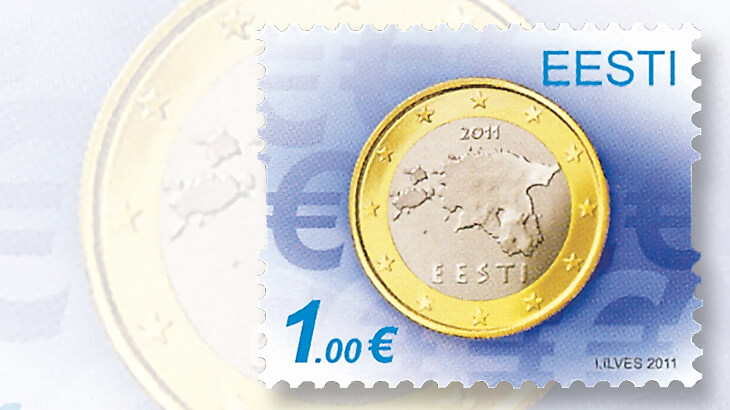 The euro symbol is featured on this E1 stamp issued by Estonia in 2011 to mark the introduction of euro currency.
Previous
Next

Another year of new issues has been processed, and it is time once more to look at the costs to obtain the new issues created for all of the various foreign stamp-issuing entities listed in the Scott catalogs.

The digital edition of the January 18, 2016, Linn’s Stamp News posted online charts (www.linns.com/en/insights/yearly-cost) compiling the number of major listings, their face value and their catalog value at the time of listing for the various stamp-issuing entities for the years 2002-2014. We have updated these files, and added the chart for 2015. These charts can be found only on the Linn’s digital edition website.

The NOTES column contains explanations and limitations for information shown. In this column, we track items that we did not assign catalog values to when listed, do not include in the totals, and items that have dates of issue that we are not certain about. Boxes that are shaded have information that we believe is complete for the year. The totals shown include stamps listed as of Dec. 13, 2016, which comprise stamps that appear in the January 2017 Scott New Listings Update.

As noted above, these lists have been compiled since 2002, and we are still compiling this information. To put that into historical perspective, when we first started gathering this data, the United States was still reeling from the September 11, 2001, terrorist attacks in New York and Washington, D.C., and had just begun taking the fight to Afghanistan. The war with Iraq was still a year in the future.

A young fellow named Barack Obama was a senator, not working in Washington, though, but in Springfield, Illinois, representing a district in Chicago. Donald Trump was still a year away from becoming the host of The Apprentice.

The euro had just started circulating as currency in Europe when 2002 began, so these lists have never recorded stamps denominated solely in Deutsche marks, Italian lire, Spanish pesetas, or French francs. In those initial days of being the new currency of a good chunk of Europe, 1 euro was worth about 87¢. At the start of 2017, 1 euro was valued at about $1.04.

Canada and Australia have seen their currencies go from valleys to peaks and back down to valleys over those years as well. But currencies that float do that from time to time.

What is perhaps most interesting on these lists is comparing the cost of the year’s stamps for a country in 2002 with the cost from 2014 or 2015. That’s when you realize that there really has been a significant change.

But a fair amount of this increase can also be a function of inflation. That is perhaps best seen when viewing the catalog listings.