The 10 designs that make up Sudan’s 1962 definitive issue 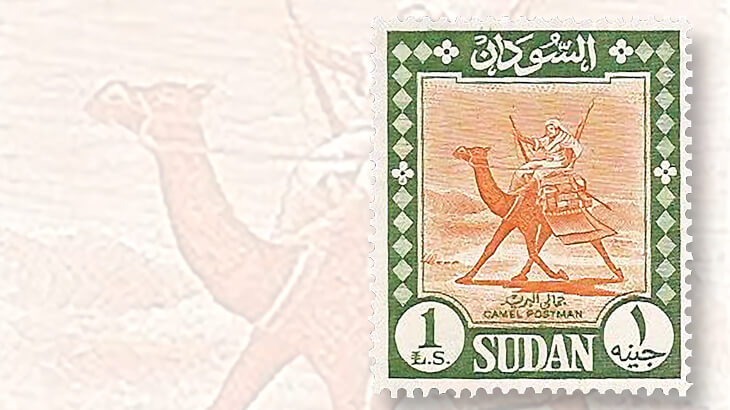 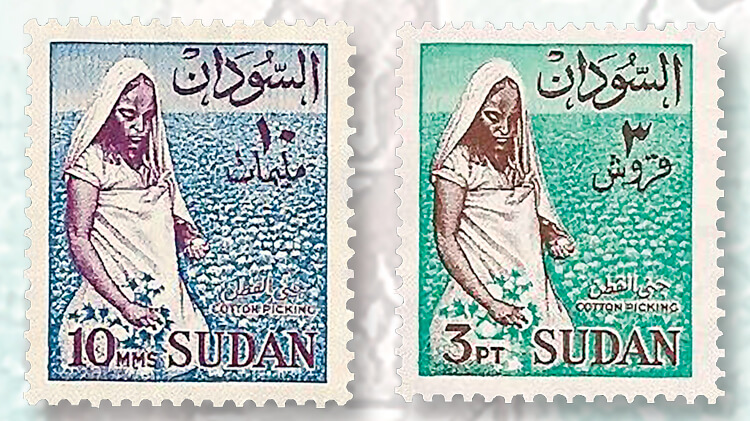 The 10m and 3p stamps in Sudan’s 1962 definitive set share the same design of a woman picking cotton. 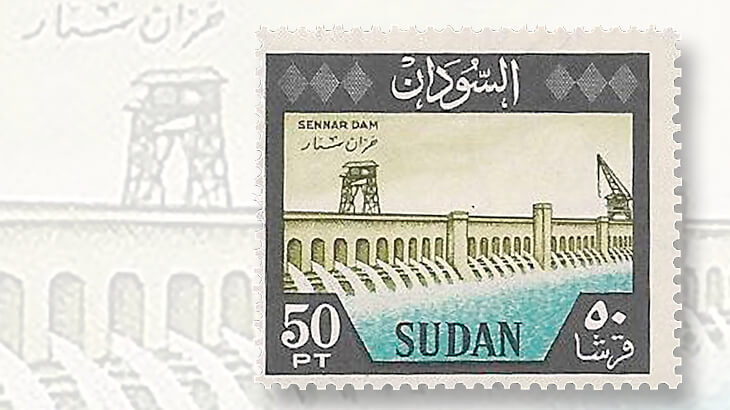 The Sennar Dam, built to provide water for an irrigation project, is featured on the 50p stamp. 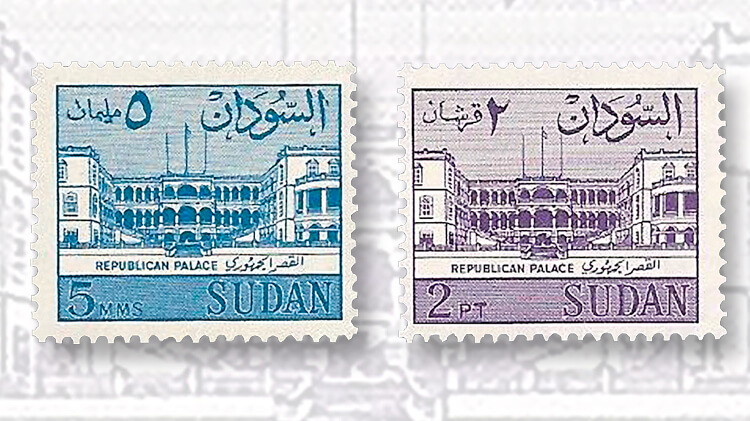 Sudan's Republic Palace is pictured on the 5-millieme and 2-piaster stamps in the 1962 definitive set. 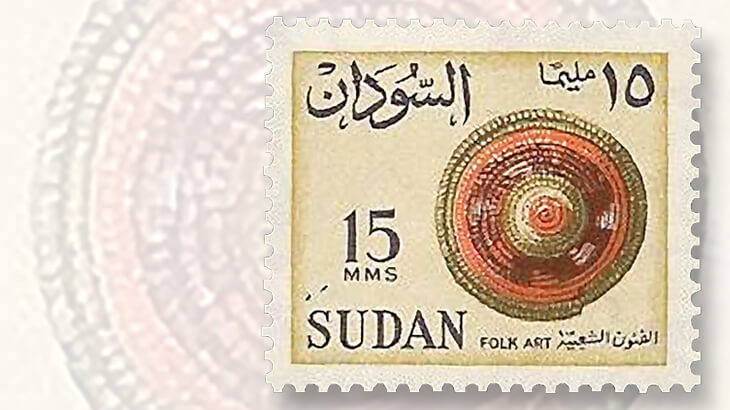 A woven straw covering for food, called a tabbaque, is pictured on the 15m stamp. 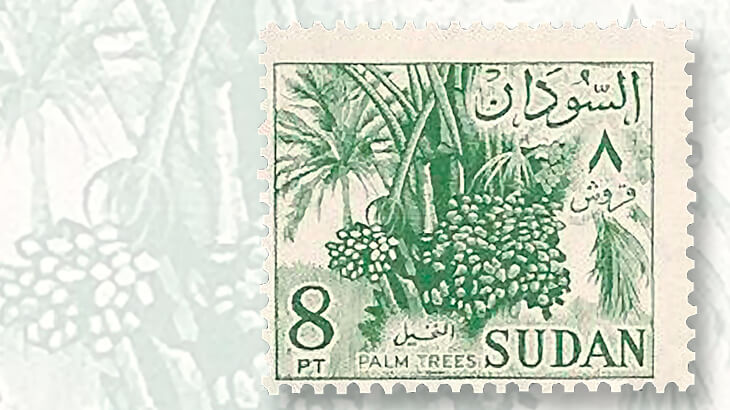 Sudan features its date palms on this 8p definitive. 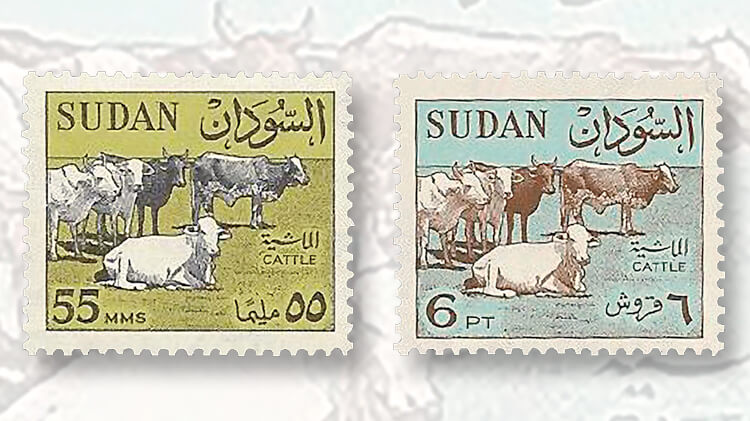 Sudanese cattle are the subject of the 55m and 6p stamps. 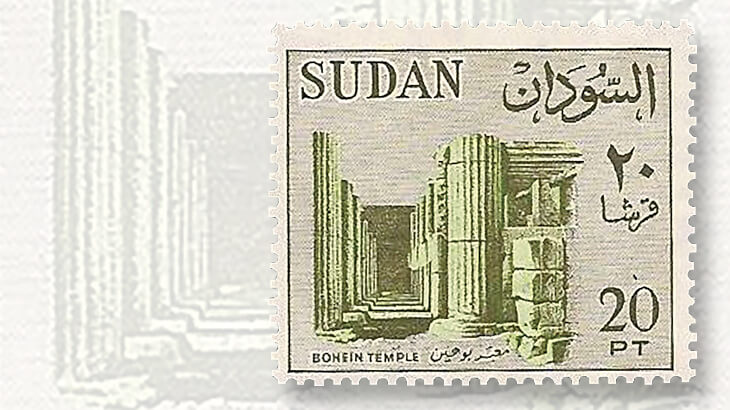 The ruins of Bohein Temple, which dates to approximately 15000 B.C., are depicted on the 20p stamp. 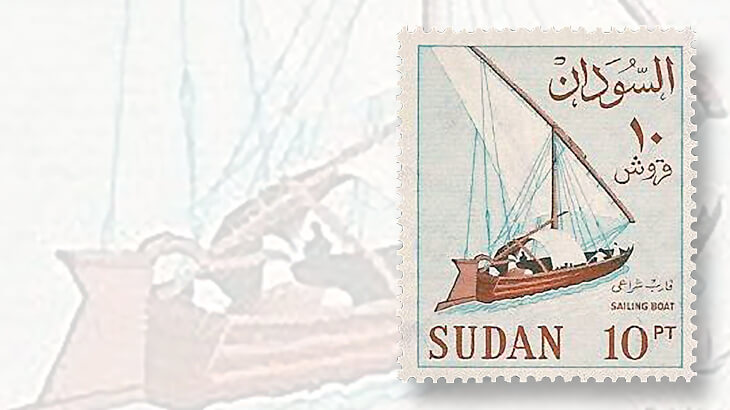 Sudan’s sailing boats, such as the one shown on this 10p stamp, often are made of wood from acacia trees. 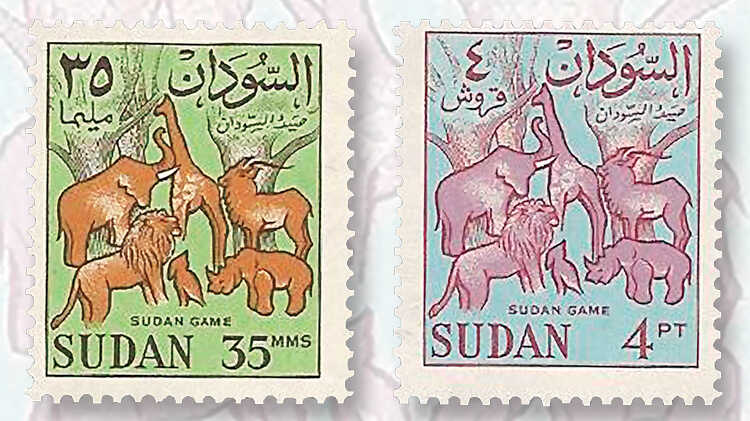 A sampling of the wildlife found in Sudan is shown on the 35m and 4p stamps.
Previous
Next

In 1951, Sudan issued an attractive set of pictorial definitive stamps to be used for all classes of mail. In 1962, new stamps were needed because of a change in postal rates.

As a result, in the summer of 1962, the Director of Posts and Telegraphs approved a new pictorial definitive set of stamps to be issued Oct. 1 of that year.

Because 10m was equivalent to 1p, the 3½p denomination from the 1951 set became 35m in the new set. Finally, two new denominations were introduced: 55m and £1.

In addition, with the exception of the traditional Camel Postman design, the 1962 set featured all new images .

The watermark depicts the emblem of the Sudan Republic, the rhinoceros, and is listed in Scott as No. 345.

The 5m and the 2p stamps share the same design based on a photograph of the Republican Palace.

Before Sudan had gained its independence, this palace was the home of the governor-general. After the country became independent in 1956, it became the official headquarters for the new government.

The palace was constructed from 1898 to 1902 over the house of a previous governor general, Charles Gordon. The ground and the first floors were designed by Colonel Gorring, an English engineer. There is no date available for when the second floor was added.

The stamps are monochome; the 5m was printed in blue and the 2p in light purple.

Below the design of the palace are the words “Republican Palace” in English at left and Arabic at right.

The 2p stamp is also known imperforate. This variety is scarce and sought after by collectors.

Imperforate proofs of the 2p also exist. They are on “Rhinoceros” watermarked paper with gum and in the same color as the issued stamp.

The 10m and the 3p denominations depict the same design showing a woman dressed in white picking cotton in a field that looks like an ocean of cotton behind her.

One of Sudan’s most important crops, cotton brings wealth and prosperity to the country and is grown in all regions.

Sudan takes great pride in its superior cotton production, and the cotton is hand picked to ensure its cleanliness and outstanding quality.

Inscribed in the upper-right corner of the 10m and 3p stamps are the country name, denomination, and currency in Arabic, with the same in English at the bottom. Above the name of the country “Sudan” in English are the words “Cotton Picking” in both English and in Arabic.

The multicolored 15m stamp was designed by Sayed Bastawi Baghdadi, the head of the School of Fine and Applied Art at Khartoum Technical Institute.

This stamp portrays a tabbaque, a cover used to protect food from insects or dirt.

The women of Sudan like to use tabbaques to create beautiful works of art, weaving richly colored, dyed straw into attractive shapes and designs. This dexterous skill is passed down through the generations in families.

There are two types of tabbaques: coarse and fine.

Arabic inscriptions are at the top of the 15p stamp, with the country name in the left corner and the denomination and currency in the right.

In the bottom-left corner is the name of the country with the denomination and currency above it, all in English. Inscribed in the bottom-right corner are the words “Folk Art” in both English and Arabic.

The 15m stamp can be found with the orange color omitted. How many stamps exist with this color error is not known. From my experience, the error is not easy to find but is well worth the attempt.

Baghdadi also designed the 35m and the 4p stamps, which feature the same illustration of trees with a small sample of the country’s amazing wildlife standing under them.

Tourists come from all over the world to see the animals of Sudan. Those pictured in the stamp design include an elephant, a waterbuck, a giraffe, a lion, a rhinoceros, and what appears to be a shoebill stork.

Both stamps are multicolored, with a yellow-green background on the 35m denomination, and light blue on the 4p.

The Arabic inscriptions are at the top of these two stamps with the currency and denomination in the left corner and the country name with “Sudan Game” below it on the right.

In English, the currency and denomination are in the bottom right, and the country name in the top right with “Sudan Game” below it.

The design that appears on both the 55m and 6p stamps is based on a local photograph of cattle.

Sudan has a wealth of cattle, numbering in the millions. These cattle are used to sustain every aspect of life — from the milk and food they produce, to the leather goods that can be created and sold. Sudan exports much of its cattle to surrounding Arab countries.

Beef is a great commodity for Sudan, and cattle raising is a thriving industry for this otherwise poor country.

The stamps are multicolored. On the 55m denomination, the animals are in black-and-white, the inscriptions are in black, and the background color is olive green.

On the 6p stamp, the cattle are in white and brown, the inscriptions are in brown, and the background color is light blue.

The green 8p stamp depicts the palm trees of Sudan. This design was based on a local photograph.

These palm trees provide the most delicious dates, but it wasn’t until recently that the Sudanese government decided to cultivate them for commercial crops. To process the dates, a factory was established in Karima.

Dates are exported and sold locally, but they also are used to produce methyl alcohol.

In the top-right corner of the 8p stamp is the country name with the currency and denomination below it, all in Arabic. In the bottom center are the words “Palm Trees” in English and in Arabic.

In the bottom-right corner is the name of the country in English; the denomination and currency in English are in the bottom right.

The next stamp in the set is the 10p denomination. Baghdadi designed this multicolored stamp showing a sailing boat in the water.

Such boats are often made from acacia trees, known locally as the sunut wood and the haraz wood.

Sunut is the stronger of the two woods and is used to make boats that will carry goods and people for long trips. Haraz wood is only used to make ferries for short trips.

Long ago, these sailing boats were essential for transport and communication, but with advancement in transportation, they are now mainly used as ferry boats and sometimes to transport bricks and palm trees.

In the top-right corner of the 10p stamp is the country name and below it are the denomination and currency, all in Arabic. In the bottom-left corner is “Sudan.”

In the bottom-right corner are the currency and denomination in English, and above them are the words “Sailing Boat” in both English and Arabic.

The 20p stamp is bicolored: gray olive and yellow green. Its design was taken from a photograph of the ruins of the Bohein Temple on the left bank of the Nile River, approximately 3 miles south of Wadi Halfa.

Queen Hatshepsut built the temple around 1500 B.C. but was never able to finish it. Later, King Thutmose III, in completing the temple, altered the original design and put his own name on the temple.

In the bottom-right corner are the denomination and currency in English. Below the design is the inscription “Bohein Temple” in both English and Arabic.

Sennar Dam is pictured on the multicolored 50p stamp designed by Baghdadi.

The dam was constructed in 1925 using more than 422,000 cubic meters of masonry and about 3,300 tons of steel. The dam’s purpose was to provide water for cotton fields and plantations, part of the irrigation project called the Gezira Scheme.

The dam is 9,925 feet long and about 120 feet high. The reservoir can store more than 2 cubic miles of water.

In the top-central panel of the 50p stamp is the county name in Arabic. In the bottom corners are the denomination and currency — in Arabic at right and in English at left.

At upper left above the dam are the words ”Sennar Dam” in English and in Arabic. Below the dam the country name is written in English over the blue water.

The last stamp in this set, the £1 denomination, features Sudan’s iconic Camel Postman design. It was the original design of the first permanent set of stamps issued by the country in 1898.

I believe that the Camel Postman design is the perfect representation of the Sudanese postal service.

The £1 stamp was printed in white, green, and brown orange.

In the frame surrounding the central design, the country name is in Arabic in the top center and in English in the bottom center.

The currency and denomination are in the bottom corners, in English at left and Arabic at right. Below the camel are the words “Camel Postman” in Arabic and in English.

According to the Scott Standard catalog, the £1 stamp exists with watermark type No. 334. Scott lists this variety as 159b, but does not assign any value for it.

Many collectors and dealers suggest introducing youngsters to stamp collecting in order to promote the hobby. I believe this stamp set would be the perfect introduction.

The designs are beautiful and filled with history and facts about the country of Sudan. They exemplify what sparks our interest in stamps.

I hope you consider purchasing this stamp set and sharing its beauty with a future collector.