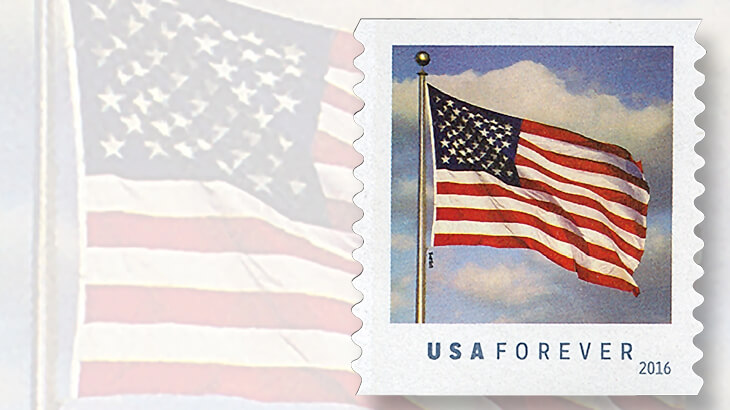 A normal example of the United States 2016 Flag forever coil stamp shows the inscription at bottom and the proper combination of colors. 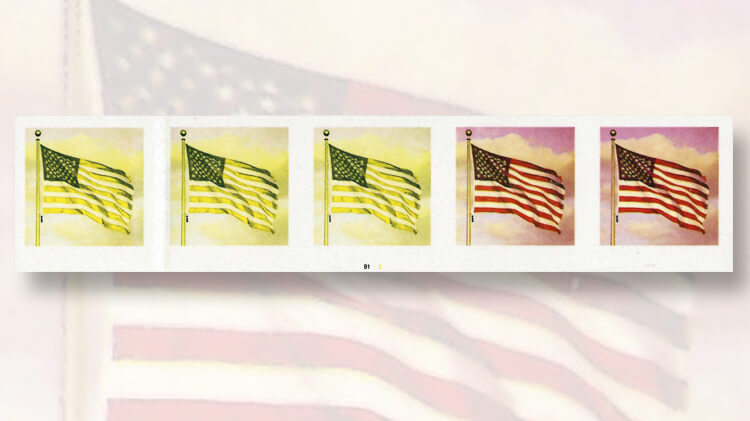 A strip of five 2016 Flag forever coil stamps with missing die cuts and noticeable color variations. The “USA FOREVER” and date inscriptions below the vignette are absent on all five stamps.
Previous
Next

A collector of United States stamps has reported a new find on the 2016 Flag coil stamp printed by Banknote Corporation of America (Scott 5052).

Robert E. Thompson sent an image to Linn’s Stamp News of a plate number strip of five of the nondenominated (49¢) Flag coil that is lacking all die cuts, and which also shows dramatic color variations that transition between adjacent stamps on the strip.

The five stamps on Thompson’s coil strip show nearly full coloration of the vignette on the two stamps at right, but the sky behind the clouds has a definite magenta cast, rather than the deep blue seen on normal issues.

The three stamps at left in the strip show a more dramatic color variation with a yellowish cast, including on the single stamp in the center position with the plate number imprint positioned below the vignette.

All five stamps are missing the “USA FOREVER” and year date inscriptions normally printed along the bottom.

The stamp strip is pictured on page 15, along with a single example of a normal coil stamp from the same printer.

According to technical details provided by the U.S. Postal Service when the coil was issued Jan. 29, 2016, the Flag forever stamp was printed with five colors: cyan, magenta, yellow, black and a color designated as Pantone Matching System 5405, which is a shade of blue identified as China blue, colonial blue or steel blue by various commercial printers.

That separate blue color might be absent from all of the stamps, causing the lack of “USA FOREVER” and date inscription.

The plate number on the stamp presumably pinpoints an outer edge of the printing cylinder that prints the stamps — where the edge of the curved cylinder meets up with the opposite edge to create continuous rows of printed stamps.

Thompson reports that the black and yellow “1” digits in the plate number are present, and that the cyan and magenta “1” digits are “slightly visible.”

Since each digit represents one of the colors used to print the stamps, that leaves one digit, presumably representing the Pantone Matching System blue color, missing altogether.

A full coil of 100 stamps was initially offered on the eBay online commerce platform on Jan. 15, Thompson told Linn’s, but the auction was canceled after one day.

On Jan. 20, strips and pairs from the coil were offered online by a different seller, and Thompson obtained the illustrated strip of five.

Thompson said that he’s heard of the existence of a third roll, but hasn’t confirmed that, and added that the dealer selling the pairs and strips said they were from a collector in the Midwest.

Thompson told Linn’s that he plans to submit his stamps for authentication.

The 2017 Scott Specialized Catalogue of United States Stamps and Covers lists one error for the 2016 Flag issue, on the double-sided pane of 20 printed and processed by Banknote Corporation of America (Scott 5054c).

The error has die cutting omitted on the 12-stamp side of the pane.