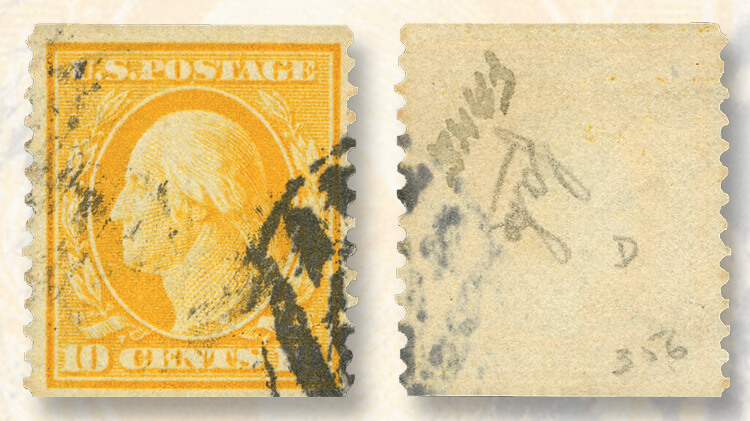 Is this a genuine 10¢ coil? If it is, the Scott Specialized Catalogue of United States Stamps and Covers values it at $4,500. The penciled notation on the reverse provides a clue. 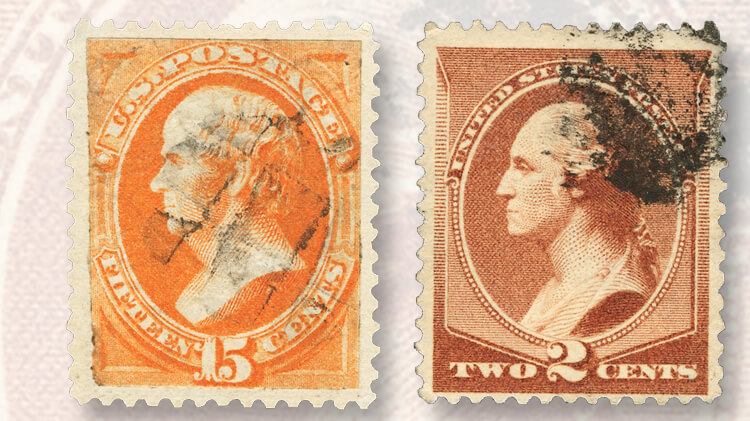 This 15¢ Daniel Webster stamp could not have better centering, in fact it is so good that it should raise red flags. Turning over the stamp raises even more. 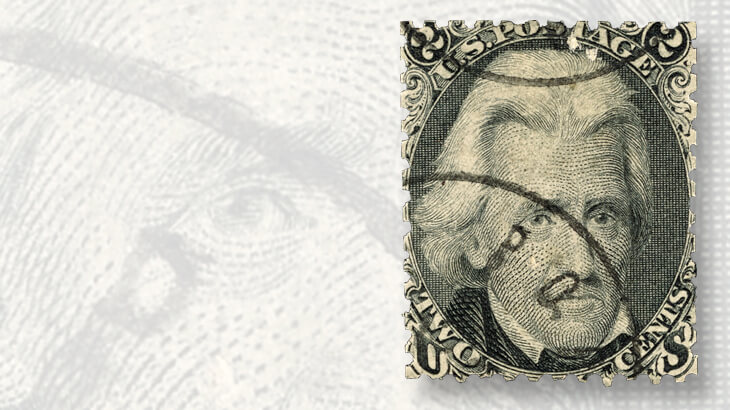 Talk about close perforations. These are into the design of this 1863 2¢ stamp picturing Andrew Jackson. 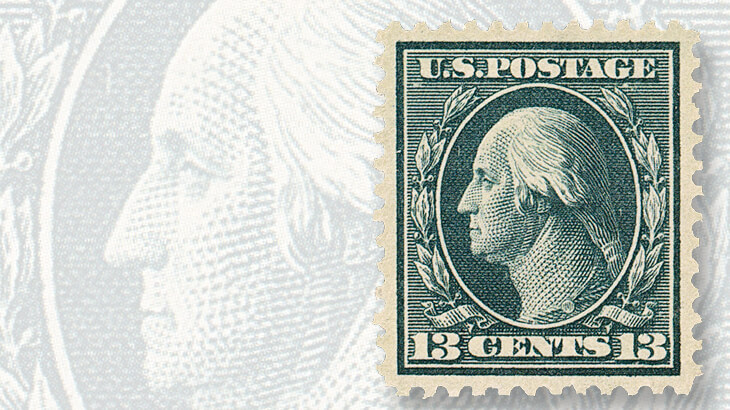 This 13¢ Washington from the first series (1908-09) of the Washington-Franklin definitives also exists printed on experimental blue paper. Expertizing can require specialized equipment. 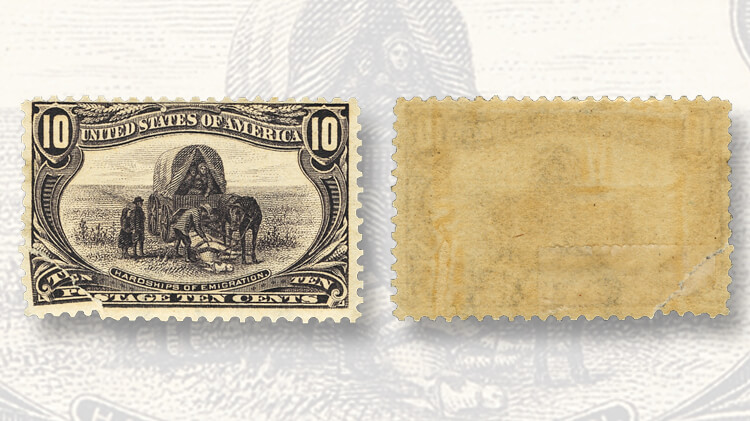 This 10¢ 1898 Trans-Mississippi commemorative appears to have a tear in the lower-left corner. In fact, as seen from the back, the entire corner has been added.
Previous
Next

I’ve made passing references in earlier U.S. Stamp Notes columns to resubmitting items for expertization that have come back with no, or negative, opinions, but a recent article by Kevin Lowther prompted me to dig a little deeper.

The article discusses the case of a 1909 13¢ Washington stamp from the Washington-Franklin series that had been submitted for expertization in 2000. It was believed to be an example printed on blue paper, Scott 365.

However, the certificate came back with the opinion that the stamp was Scott 339, the double-line watermarked normal issue, printed on paper that had been toned. A normal Scott 339 is shown nearby.

The stamp was filed away for a time, but eventually Lowther sent it to Harry Brittain. Lowther described Brittain as a “USSS member with the necessary equipment and expertise, to contrast the stamp’s paper with that used to print two certified blue paper stamps in my collection.”

Brittain made a convincing case that the papers of all three stamps were the same. With this information in hand, the stamp was resubmitted for expertizing in 2016, and received a positive certificate as a Scott 365.

Lowther wrote: “There is a lesson here. The technology used by Brittain was unavailable in 2000. Expertizing services now have more advanced means to examine items that may previously have defied ready identification or were misidentified.”

He ended with a suggestion from the director of a an expertizing service that because of the improved technologies available, collectors who have items that were certified more than 15 years ago consider submitting them for recertification.

New technology is not the only reason for resubmission. Not too long ago, I sent in for certification a People’s Republic of China booklet that was made from stamps taken from a normal sheet. The certificate came back as a “no opinion” because the experts could not agree.

Ultimately, I was able to resubmit with evidence that the booklet and several others like it had been purchased as new issues. That turned the tide, and a good certificate was issued.

Often submitters have good reason to believe that an item is genuine, but make the mistake (as I did with the China booklet) of assuming that their reasons will be obvious to expertizers.

It takes a bit of extra effort, but submitters who are well acquainted with their items, should consider adding a letter with the expertizing form, setting forward the case for why the item is believed to be genuine.

This will help the expertizers focus on the most important characteristics of the item, and perhaps to overcome doubts as well. It does not guarantee a positive result, but it will blunt the likelihood of a premature turn-down.

If you receive a negative certificate and believe it is wrong, you have three alternatives:

1. File the item away pending acquisition of more knowledge, or better technology.

2. Resubmit with information you have that would mitigate negative opinions.

3. Submit to a different expertizing house.

If you pursue the third choice, remember you will be asked on the submission form to state whether the item has been submitted for expertizing before, where, and what was the result.

You might wrongly assume that the previous negative opinion will damn the item to further negative opinions, but a competent expertizer will not start from that mindset.

We have all seen it happen: New eyes, with different experience and perhaps more knowledge, might reach a different conclusion.

If you collect U.S. stamps, consider joining the United States Stamp Society. The monthly magazine alone is worth the annual dues of $25. The society offers much more in the way of discounts on publications, study groups, access to experts who can help you, and the opportunity to advertise for your wants.

Additional information about membership can be obtained from the USSS Executive Secretary, Box 6634, Katy, TX 77491-6634, or from the USSS website.

Repairs to high-catalog-value stamps can present some of the most subtle of problems to identify when expertizing. But sometimes the repairs are so blatant and obvious that a good laugh is the best reaction. Here are a few from my files that fall in the latter category.

Patient 1: The 1898 Trans-Mississippi 10¢ mint stamp looks pretty good from the front, except for what seems to be a tear in the lower left, as shown nearby. But turn it over and look at that corner, now at lower right. I hope you can see that an entire new corner has been added. Besides that, the gum has been sweated over a clear hinge remnant.

Patient 2: If one or more rows of perforations are damaged on your sheet stamp and the stamp has a coil version, why not just cut off the offending perforations and make it into the coil?

Unfortunately, to the practiced eye of an expertizer, it is not tall enough to pass muster, and the clipped edges that would make it a coil are not parallel. Also, the person peddling this item partially erased — but not completely — a penciled notation on the back reading “fake.”

Patient 3: In the olden days, some collectors cared nothing for perforations. They were an annoyance, so they could be cut away to the edge of the design. When such album weeds are encountered today, they have little value, even though the design might be complete. What some collectors have done is paste the design onto a new back.

Artfully executed, it can be a thing of beauty, as shown nearby, but the items usually will be too thick to pass as genuine. What makes this one laughable is that the person dealing with this fixer-upper didn’t bother making new perforations to mimic the genuine; instead, the fabricator simply pasted the 15¢ Daniel Webster design onto the back of a Washington 2¢ red brown (Scott 210), which is obvious when the stamp is turned over.

This would never pass in expertizing, but if the goal were to make an album page more impressive, it was a workable solution.

Patient 4: Another way to address the cut-down stamp has been to add perforations to the edges, and hope for the best. Shown is an example of a 2¢ Black Jack from 1863. I hope this would not fool anybody, but someone obviously hoped it would. We’ll look at some more laughers in future columns.