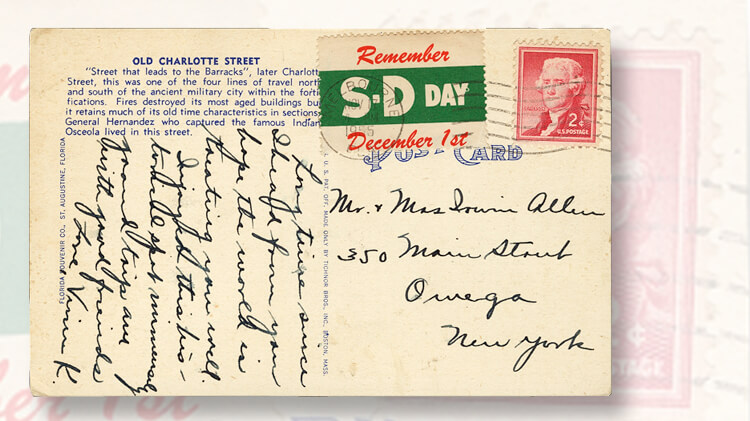 The meaning of S-D Day on this 1955 postcard label relates to Safe Driving. Thanks to the 35 Linn’s readers who wrote in with the answer or guesses.

What is SD Day? Safe Driving Day! Of course, it makes perfect sense.

Thirty-five Linn’s readers responded to that question after I posed it in a U.S. Stamp Notes column posted to Linns.com Feb. 18, 2016, about the “Remember S-D Day December 1” label on a 1955 postcard.

The overwhelming majority correctly identified this as the second running of Safe Driving Day, an effort inaugurated in 1954 by President Dwight Eisenhower to reduce fatalities and accidents on our nation’s streets and highways.

After climbing into the 54,000 range in 1972-73, there has been a slow but steady decrease in yearly deaths, despite a substantial increase in miles traveled, population, and numbers of motor vehicles on the roads. We can thank lower speed limits, safer cars and more driver training at all age levels.

The last year for which I have a figure is 2014, and it was 32,675 — not a great record in absolute terms; but better than it might be. Perhaps we need to try Safe Driving Day again?