The website devoted to getting kids into stamp collecting 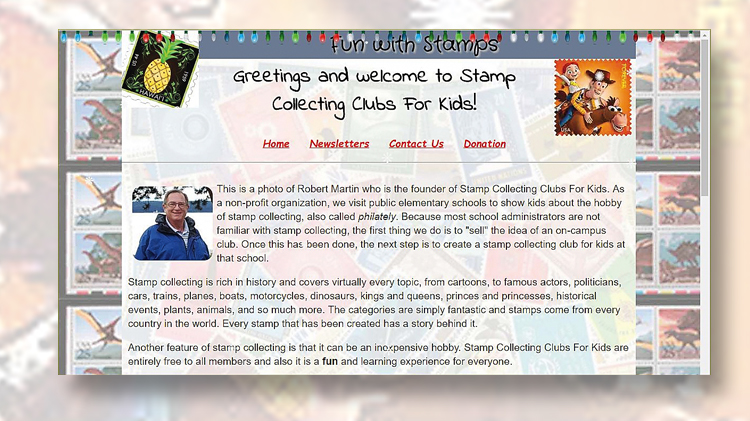 Upper part of the main page of the website www.stampcollectingclubsforkids.org. 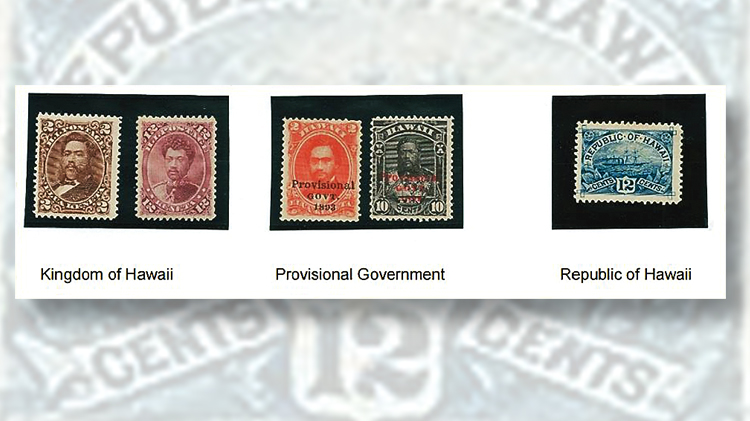 Early Hawaiian stamps from the kingdom, provisional government and republic as illustrated in the newsletter Philatelikid.
Previous
Next

Kihei, Hawaii, has very few mailboxes, which is why my wife and I headed to the post office to mail some cards back home on a recent vacation.

As we drove into the parking lot, my wife noticed a car parking in front of us with a bumper sticker that read, “I’d rather be collecting stamps.”

As I was parking, I managed to see the gentleman in the car get out. I walked up and asked him if he was a stamp collector.

Robert W. Martin is indeed a collector, and he proceeded to tell me about his activities in collecting, including running a website for young collectors, Stamp Collecting Clubs For Kids.

He said that stamp collecting is rich in history and covers virtually every topic, from cartoons to famous actors, politicians, cars, trains, planes, boats, motorcycles, dinosaurs, kings and queens, princes and princesses, historical events, plants, animals, and so much more.

His monthly newsletter, the Philatelikid, is available to read or download online. Back issues also are available.

The December 2014 issue details the opening of the sixth club, which started at  Kamali’i Elementary School in Kihei with 324 members. The school has a total enrollment of 476, not counting kindergarten.

Previous clubs were formed in California and Nevada.

One of Martin’s newsletters mentions the five different forms of government that Hawaii has had since postage stamps were invented.

As a kingdom and sovereign nation, Hawaii issued its own stamps from 1851 to 1893. That kingdom was overthrown by the United States, and a provisional government was installed, introducing a second type of stamp.

For a brief time, Hawaii was a republic with a third type of stamp.

A fourth type of government began in 1899 when Hawaii became a territory of the United States and began using U.S. stamps. The stamps were canceled “T.H.,” which stood for “Territory of Hawaii.”

The fifth type of government began Aug. 21, 1959, when Hawaii became a state. Cancellations were changed to read “Hawaii” and later to the two-letter designation “HI.”

Several early Hawaiian stamps as displayed in the newsletter are shown nearby.

Martin keeps membership statistics and reveals that two-thirds of the children who join the clubs are girls.

Even though the Stamp Collecting Club for Kids website is in Hawaii, when I visited the site the pages were showing snowflakes falling and a snow plow sweeping up the fallen snow at the bottom of the page. You could also move your cursor over the Christmas lights at the top of the page and “pop” them.

Anyone interested in starting a stamp club in a school can contact Martin at Stamp Collecting Clubs For Kids, Attn.: Robert W. Martin, Box 1809, Kihei, HI 96753-1809. Martin also is looking for stamp and cash donations, because he supplies stamps, hinges, and tongs for his club members.

Staying connected with other collectors through social media: Computers and Stamps