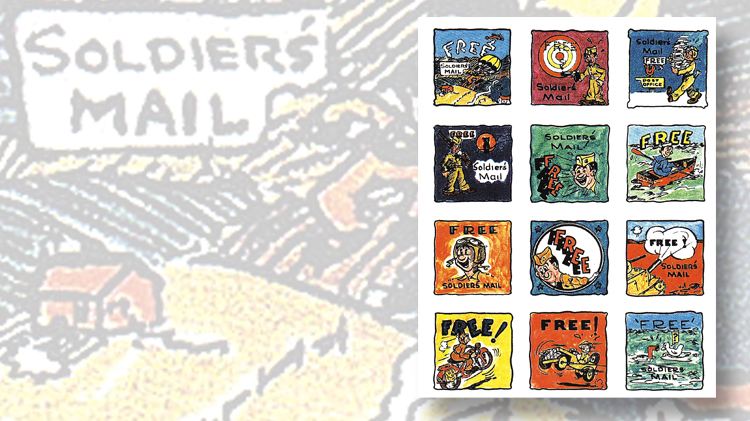 Army Staff Sgt. G.H. Sebenar’s “Free” labels, in the form of this sheetlet of 12 designs, were featured in a 1942 article in Collier’s magazine. Some of the illustrations of the labels were cut out of the magazine and used on soldier’s mail. 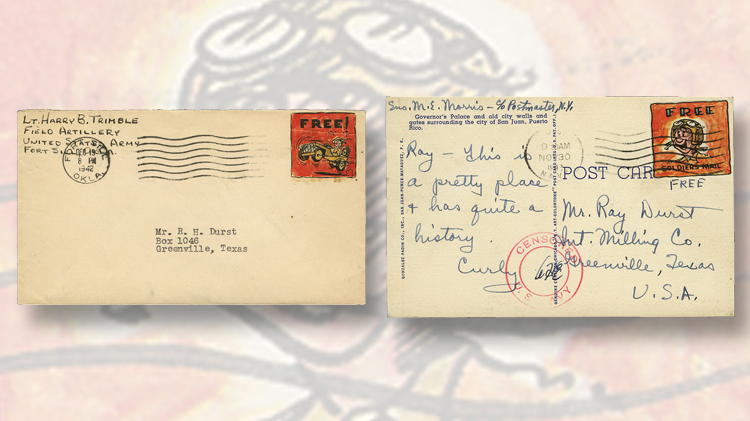 These two examples of G.H. Sebenar’s “Free” labels were used on covers sent from Oklahoma and from a Navy station in Puerto Rico to the same person in Texas. 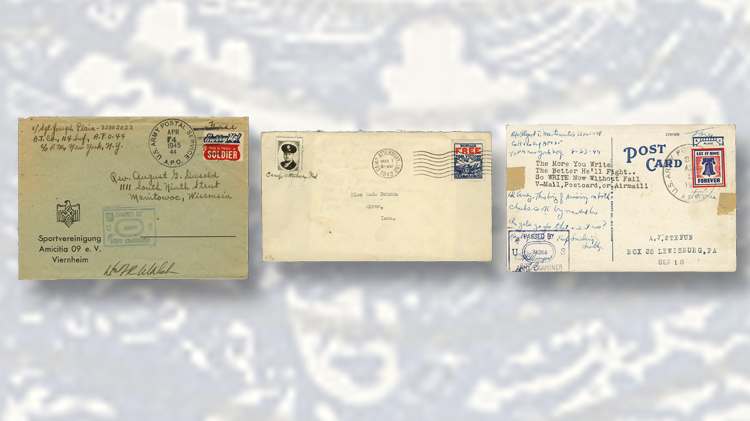 “Free” and other decorative labels such as these examples were not permitted on World War II soldier’s mail under Post Office Department regulations. However, they were often used, and postal personnel seldom made a fuss over them.
Previous
Next

“Free” and other decorative labels on soldier’s mail of World War II are not often seen, but there are many different examples that can be found.

Three examples are shown in the first illustration. The label on the first cover reads “Hurry Up! This is from a SOLDIER.” The second label bears the message, “Postage FREE For Victory,’” and the third shows the Liberty Bell and is inscribed “Let It Ring Forever.” The first and third covers both bear Army censor markings.

“Free” labels were contrary to Post Office Department rules, which specified that the sender write the word “Free” in the upper-right corner. However, it seems that most post offices looked the other way when the labels were used.

Among the most sought-after these days are the labels produced by Army Staff Sgt. G.H. Sebenar, whose artistic endeavor had the distinction of being written up in an early 1942 issue of Collier’s magazine, under the heading of “Yankee Doodler.”

Sebenar’s labels were never mass-produced, but the Collier’s article, which showed one of the 12-design sheetlets in color received wide distribution.

Many years ago, I showed the labels from the Collier’s article in black-and-white (Linn’s, Oct. 23, 2000). They are pictured here in color, courtesy of Richard Sheaf.

Over the years I’ve accumulated examples of eight of the 12 Sebenar labels on covers, and I’ve received reports of many other covers.

All the reported examples are canceled between May 1942 and February 1944. They show a wide distribution consistent with what one would expect with a national magazine.

The two examples shown with this column were sent from Oklahoma and Puerto Rico. The picture side of the Puerto Rico postcard depicts  the Governor’s Palace and old city walls in San Juan.

My sense is that these Sebenar labels do not have a huge following, as they are generally priced in the $15 range when found, but they are not often found!

One of the most interesting Christmas cards you’ll come across