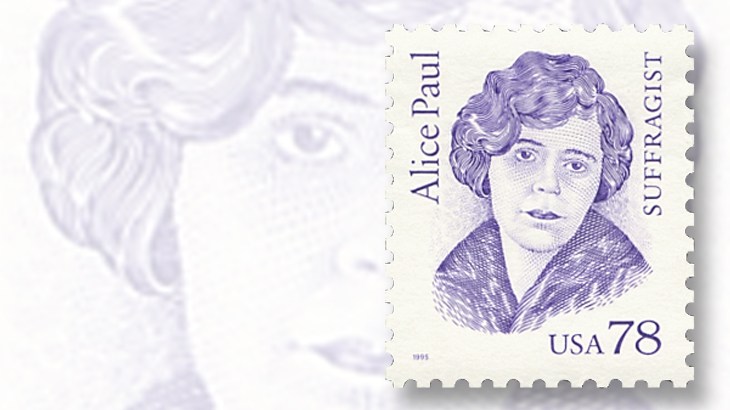 Alice Paul, a prominent women's rights activist in the 20th century, featured on a 78¢ stamp from 1995.

A 78¢ Great Americans definitive series stamp honoring Alice Paul, who sought an amendment to the United States Constitution that would establish equal rights for women, was issued Aug. 18, 1995 (Scott 2943). The purple stamp was designed and illustrated by Chris Calle and engraved by Martin Morck.

Paul was born into a Quaker family in Mt. Laurel, N.J., on Jan. 11, 1885. As a child she was taught that men and women are created equal, and after graduating from Swarthmore College in 1905, she worked for the cause of women’s suffrage in both the United Kingdom and the United States.

She was appointed chair of the Congressional Committee of the National American Woman Suffrage Association in 1912, and organized the Woman Suffrage Procession in Washington, D.C., the following year.

“In 1913, she led a group of militant suffragists in secession from the organization and founded the Congressional Union for Woman Suffrage,” the United States Postal Service wrote in its Stamp News Release No. 95052. “This organization merged in 1917 with the Woman’s Party to form the National Woman’s Party.”

After women won the right to vote in 1920, Paul crafted her Equal Rights Amendment and worked for its passage.

The Equal Rights Amendment was passed by both the House and the Senate in the early 1970s, but it failed to get the necessary votes for ratification by the states.

Paul was also instrumental in changing the United Nations preamble and charter to gender-neutral language, the Postal Service noted. She died July 9, 1977.