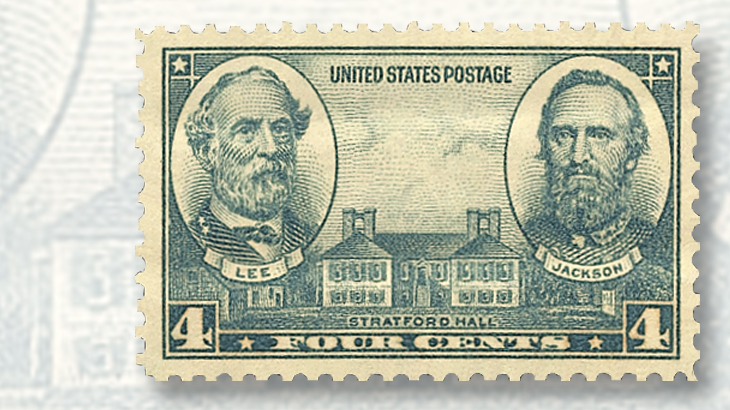 Confederate Gen. Stonewall Jackson is shown at right on this 1937 commemorative.

Jackson was born Jan. 21, 1824, in Clarksburg, Va., which is now in West Virginia. Orphaned as a youngster, Jackson lived with relatives and sought to educate himself. He was accepted into the U.S. military academy at West Point, graduating in 1846.

Jackson and Lee met in Mexico where they both served during the 1846-48 Mexican-American War. Jackson became an instructor at the Virginia Military Institute, but with the onset of the American Civil War in 1861, Jackson joined the Confederate Army, leading a brigade at the first battle of Bull Run, known as First Manassas, on July 21, 1861. His brigade came to be known as the Stonewall Brigade, and Jackson was there after known as “Stonewall” Jackson.

He went on to command at Antietam, Fredericksburg, and Chancellorsville, but was accidentally shot by Confederate soldiers on May 2, 1863, and died of pneumonia eight days later.