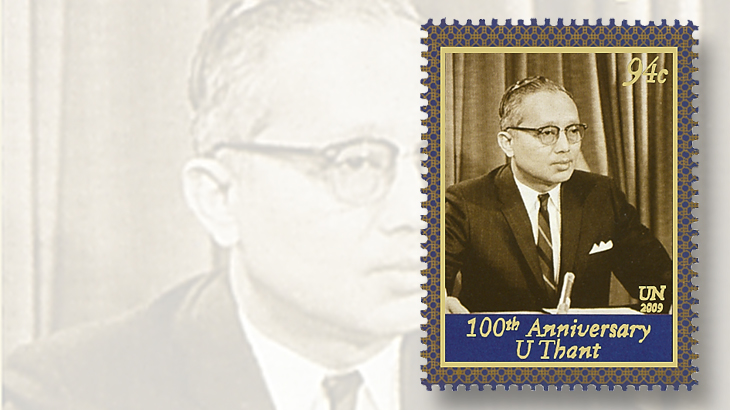 United Nations Secretary General U Thant was commemorated on U.N. stamps in 2009 to mark his birth centenary.

The Burmese diplomat Thant (known internationally with the honorific title U Thant) was born Jan. 21, 1909. At age 52, he became secretary general of the United Nations following the death of Dag Hammarskjold in an airplane crash.

Thant was born in the town of Pantanaw in the country known today as Myanmar or Burma. He studied at Rangoon University (now the University of Yangon), and was involved in education as headmaster at the National High School. He also worked as a freelance journalist.

When Burma achieved independence from Britain in 1948, he was chosen for a government office under the first Burmese prime minister, U Nu, eventually leading to his 1957 appointment as Permanent Representative of Burma to the United Nations.

Thant was instrumental in bringing about a peaceful resolution to the 1962 Cuban Missile Crisis, and was known for his devotion to the environment and the development of poorer nations.

In 2009, UN Secretary General Ban Ki-moon said, “He put forth a vision of a truly global society, and emphasized the need, as he put it, ‘to understand each other and to develop a spirit of One World.’”