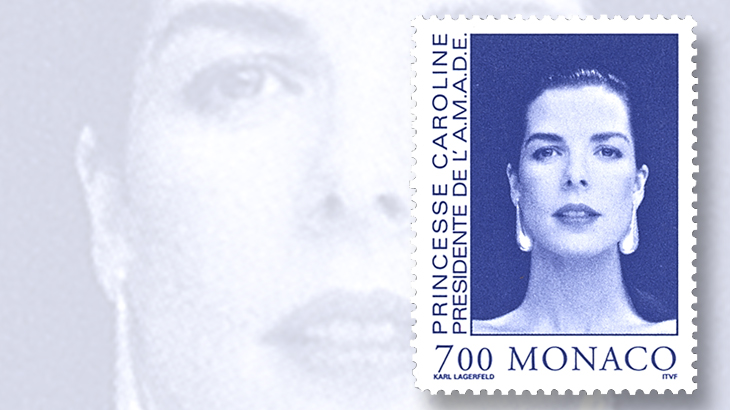 Princess Caroline, now princess of Hanover, was pictured on this 7-franc stamp from Monaco in 1995.

She is the daughter and first-born child of Prince Rainier III, Louis Henri Maxence Bertrand Grimaldi (1923-2005) and Princess Grace, the former Grace Kelly (1929-82). She is also sister of the reigning monarch of the principality, His Serene Highness Prince Albert II; their younger sister is Her Serene Highness Princess Stephanie.

Caroline graduated from the Sorbonne in Paris, France, with a degree in philosophy. She was appointed by her father as president of the Princess Grace Foundation, which contributes to charity work that benefits children. She also created the Ballet of Monte-Carlo in memory of her mother.

In 1983, she married financier and businessman Stefano Casiraghi. The couple had three children together, but Casiraghi was killed in a powerboat crash in 1990.

As a child, Caroline was depicted on stamps of Monaco with her mother and her younger siblings. In 1995 she was pictured on a 7-franc stamp honoring her presidency of the World Association of Friends of Children (Monaco Scott 1948).