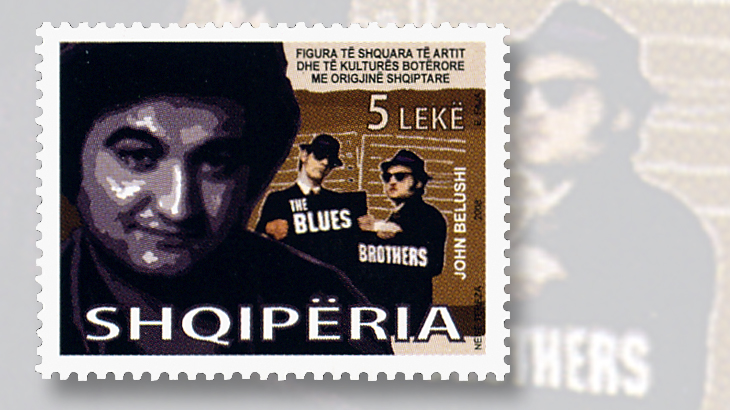 John Belushi, the son of an Albanian immigrant, was honored on an Albanian stamp in 2008.

Belushi was the son of Albanian-born restaurant owner Adam Belushi and his wife Agnes, whose own parents were also Albanian immigrants. John was the couple’s second child of four; his younger brother James is also a successful actor and singer.

With an interest in acting, John studied at the University of Wisconsin-Whitewater and the College of Du Page in Glen Ellyn, Ill. He joined the Second City comedy troupe in 1971, and became a writer for National Lampoon Radio Hour in 1974. The following year he was picked for the first cast of Saturday Night Live, and he married his high school sweetheart, Judy Jacklin, soon after.

With friend and fellow cast member Dan Aykroyd, Belushi fronted the Blues Brothers, belting out blues, soul, and R&B songs with a band of outstanding musicians, paying tribute to the original performers who wrote and recorded the music. Their first album, A Briefcase Full of Blues, was recorded live; it hit No. 1 on the Billboard music chart in 1979 and was followed by The Blues Brothers motion picture the following year.

John Belushi was honored by his father’s home country, Albania, with a 5-lek stamp issued July 9, 2008, as part of a set honoring famous people of Albanian heritage (Scott 2855a). The stamp shows a portrait of Belushi in the foreground, and Belushi with Aykroyd in the background as the Blues Brothers, Jake and Elwood.