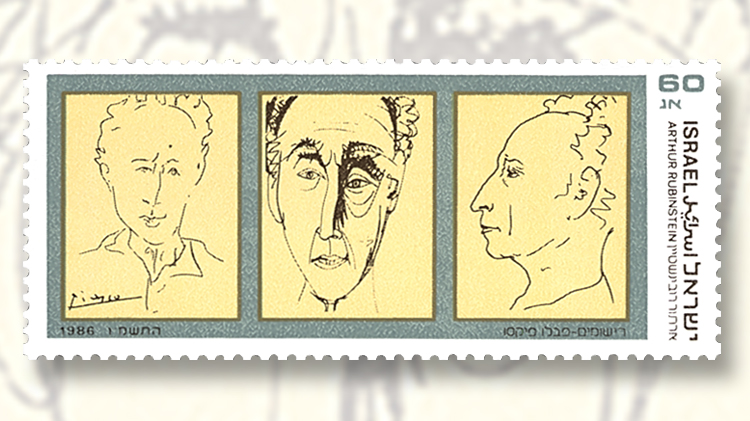 Pianist Arthur Rubinstein is honored on a 1986 stamp set from Israel, featuring artwork by Pablo Picasso.

Arthur Rubinstein, one of the world’s most admired pianists and a beloved performer of classical works, was born Jan. 28, 1887, in Lodz, Poland. His musical gifts became evident when Rubinstein was still very young: at age 13 he performed in concert with the Berlin Philharmonic Orchestra after studying with accomplished musicians in that city.

Still in his teens, he first performed in the United States in 1906, after which he lived for a while in Paris, and then Spain. Though he reportedly made recordings in Poland in 1910, he began recording in earnest in 1928. By the 1940s, his records were among the top sellers in the classical genre, with particular acclaim for his performances of Chopin, Brahms, and Mozart, most often as solo recordings, but also with orchestra and chamber ensembles.

His outgoing personality and prodigious skill earned him an enormous fan base and loyal following, along with considerable wealth from his successful record sales. He became an American citizen in 1946, and lived for many years in New York City before returning to Europe. He died in Geneva on Dec. 20, 1982.

A two-stamp souvenir sheet (with central label) honoring Rubinstein with portraits by Picasso was issued by Israel March 4, 1986 (Scott 935).