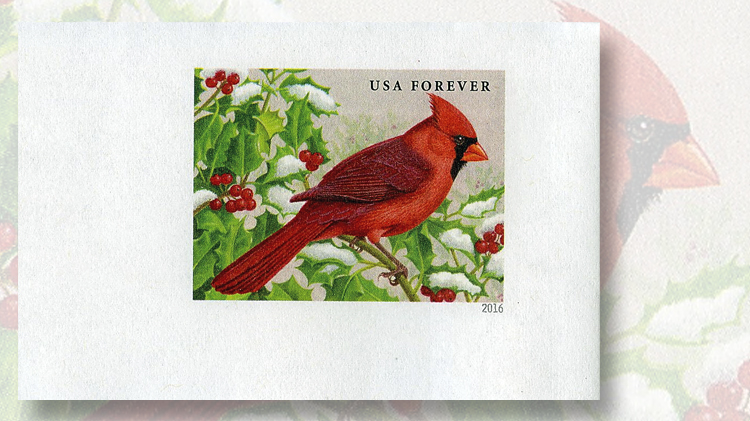 A stamped forever envelope with a preprinted Northern Cardinal design appeared in an Ohio post office in late December. The envelopes are sold in packs of 12, but have been not been formally announced by the United States Postal Service. 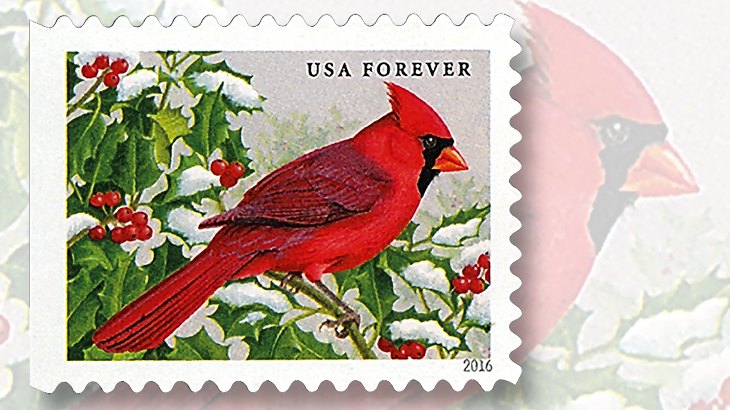 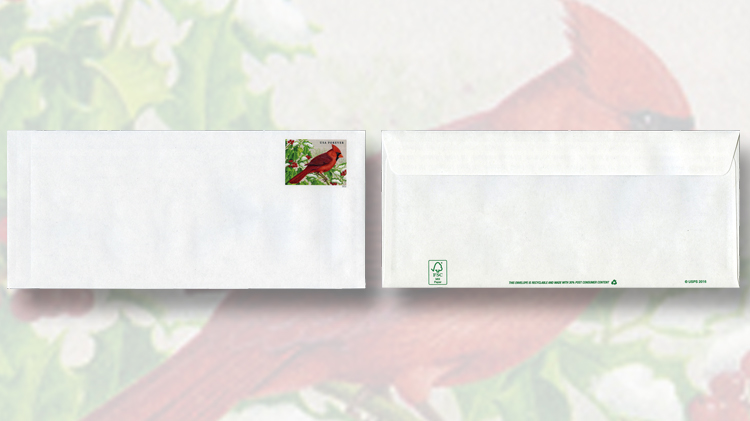 The front and back of the new Northern Cardinal stamped envelope. No issue date has been announced, but some Postal Service outlets have been offering it for sale. Only a No. 10 security envelope is known so far.
Previous
Next

A new Northern Cardinal stamped envelope from the United States Postal Service recently made a surprise appearance in a post office in Marion County, Ohio, roughly 50 miles north of Columbus.

The previously unannounced security-lined envelope repeats the design of the Northern Cardinal forever stamp that was issued Aug. 4, 2016, as part of a set of four Songbirds in Snow stamps (Scott 5128).

The envelopes were purchased by John Kurtz while on a recent visit to Marion. He noticed “a couple of packs of 12” of the envelopes on a post office display rack. Kurtz provided the envelope images pictured here, which are used with his permission.

“Having always liked the design on the original postage stamp, and since the Northern Cardinal is the state bird of Ohio, I purchased a pack,” he told Linn’s Stamp News.

Kurtz was surprised to discover that the envelopes had never been reported, and were not listed in the most recent USA Philatelic catalog from the Postal Service, nor on the USPS online retail site. He contacted Scott catalog new-issues editor Martin J. Frankevicz for more information, and Frankevicz relayed his message to Linn’s. The Scott catalogs and Linn’s Stamp News are both divisions of Amos Media.

Kurtz placed a call to USPS Stamp Fulfillment Services and provided the item number for the 12-pack of envelopes. A customer service representative acknowledged that the envelopes were listed as an inventory item but had not been issued and could not be sold. A follow-up call by Linn’s on Jan. 4 received a reply that the item is now available for ordering.

Kurtz took one of the envelopes to his local post office, where he obtained a Jan. 3 dated postmark on the preprinted stamp design.

The envelope stamp design appears to be unchanged from the design of the Northern Cardinal forever stamp issued last August. It shows a male Northern Cardinal facing right while perched on a snow-covered branch of European holly with red berries. “USA FOREVER” is printed at upper right within the design of both the postage stamp and the preprinted envelope stamp, and the year date 2016 is printed at lower right in the margin of both.

The stamp artist is Robert Giusti.

The envelopes come packaged with a folded imprinted package seal that states “Make Mailing Easy! No extra postage is necessary with this set of 12 stamped envelopes. Each #10 security envelope includes pre-printed Northern Cardinal First-Class Forever postage. Plus the set comes with 12 matching seals to add a touch of class to all of your correspondence!”