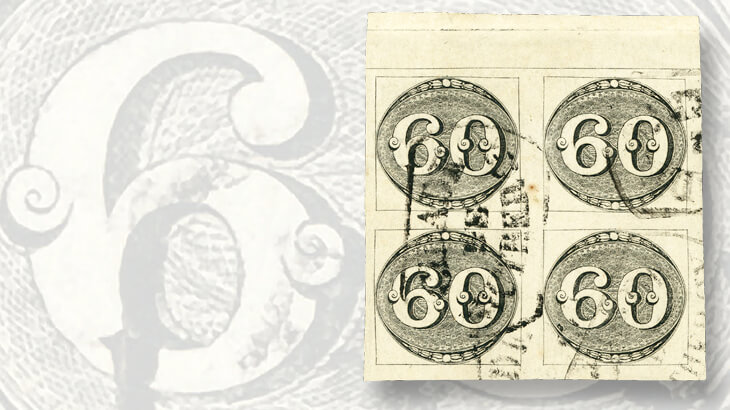 A postmarked top margin block of four of Brazil’s 60-reis “Bull’s Eyes” stamps sold at the Nov. 29-30 auction of worldwide stamps and covers conducted by Cherrystone in New York City. 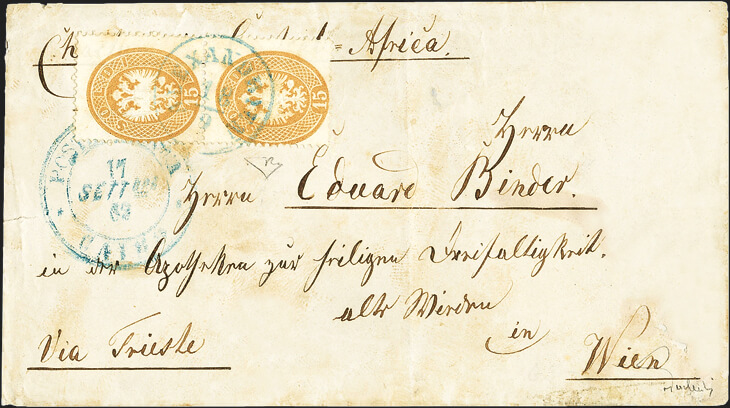 The Cherrystone auction included this 1863 cover from Khartoum to Vienna, the only such cover known franked with stamps and mailed prior to the opening of the Egyptian post offices in Sudan. It sold for $10,925 in the late November sale.
Previous
Next

A beautiful block of four Brazilian “Bull’s Eyes” was among the standout lots. In 1843, Brazil became just the second country in the world to issue stamps, after Great Britain, and the design of its first issue consists of nothing more than the figure of value on an ornately engine-turned background pattern. The intricate, circular design and crisp black printing earned the stamps their nickname.

The 60-reis was the middle value (Scott 2), and surviving used multiples are scarce. This top margin block, showing an intermediate amount of plate wear and postmarked “Cidade de Nictheroy,” is considered one of the finest known.

An 1863 cover from Khartoum to Vienna was “one of the very few covers posted from Sudan prior to the opening of the Egyptian Post Offices (1867) and the only one known franked with stamps,” according to an accompanying certificate from the well-known Austrian expert, Ulrich Ferchenbauer.

The letter most likely traveled first by camel runner — that iconic figure familiar to generations of stamp collectors from the long-running series of Sudanese stamps that began in 1898.

The camel probably took it to the nearest Egyptian post office along the Nile. From there, it would have gone down the river to Cairo and over to Alexandria, where a pair of 15-soldi Austrian Offices in the Turkish Empire stamps (Scott A19) were added and postmarked in blue.