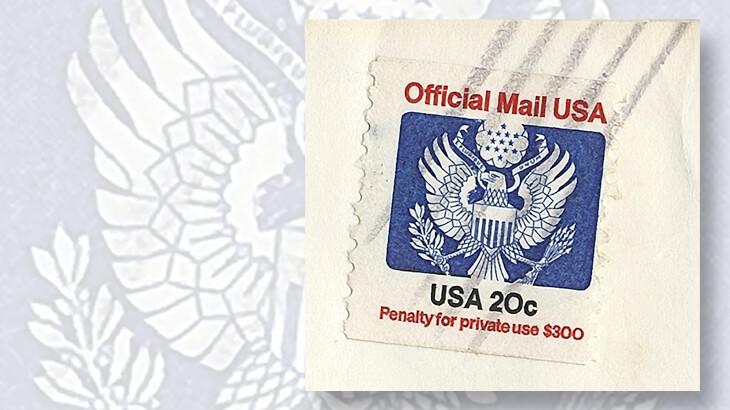 This United States 20¢ Great Seal Official Mail coil stamp from 1983 has been certified as a tagging-omitted error. Shown here graphically cropped, it is the first tagging error reported for the 1983 Official Mail issue. 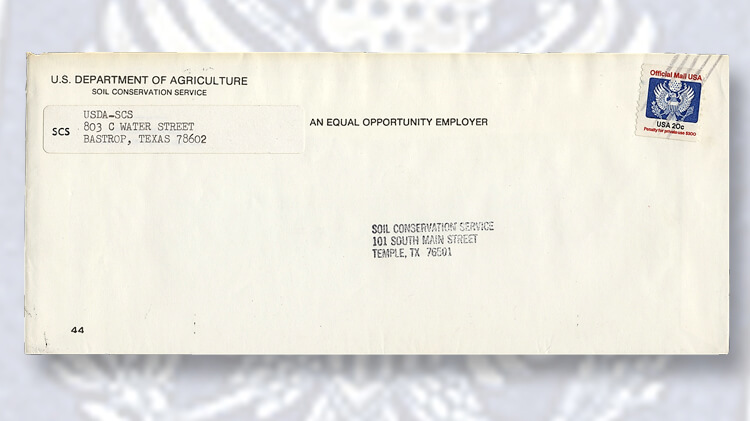 The cover bearing the tagging-omitted 20¢ Official Mail error stamp was mailed from one government office in central Texas to another, presumably between 1983 and early 1985.
Previous
Next

A new error variety of the United States 20¢ Great Seal Official Mail coil stamp issued in 1983 has been discovered.

Robert E. Thompson found the tagging-omitted error on a cover that he purchased as part of an auction lot comprised of about 3,000 Official Mail covers from the 1980s to the early 1990s.

“It included stamped covers from 20¢ to 29¢, and embossed covers during the same period,” Thompson told Linn’s Stamp News. “It was the only one that was untagged.”

Like most modern U.S. letter-rate stamps, the 20¢ coil stamp was printed with a nearly invisible luminescent tagging made from a chemical compound that glows when exposed to ultraviolet light.

When a mailpiece franked with the stamp travels through automated mail sorting machinery, the machine detects the tagging material on the stamp and strikes it with a postmark.

Official Mail stamps are no longer issued by the U.S. Postal Service. Only authorized government agencies were allowed to use them for postage.

The stamp discovered by Thompson is affixed to a cover with a preprinted corner card (return address) mailed from a U.S. Department of Agriculture office in Bastrop, Texas, to a related office in Temple, Texas, about 75 miles to the north. Temple is east of Fort Hood, and Bastrop is southeast of Austin.

The 20¢ coil stamp (Scott O135) is tied to the envelope with five black parallel lines of a postmark, but nothing to indicate the date of mailing.

It appears as though the stamp was postmarked manually, possibly after it was missed by sorting machinery because the stamp lacked the chemical tagging.

The envelope was examined by the American Philatelic Expertizing Service, which issued a certificate dated Aug. 22, 2016, stating the opinion that the stamp is “United States, Scott No. O135 tagging omitted error, used on cover, genuine in all respects.”

Thompson’s discovery is the first tagging-omitted error reported for the 1983 Official Mail stamps, which were the first Official stamps to use the Great Seal design as a vignette.

A 1985 22¢ Official Mail coil stamp with tagging omitted was previously reported, and is listed in the Scott Specialized Catalogue of United States Stamps and Covers as Scott O136a.

James E. Kloetzel, editor emeritus of the Scott catalog, confirmed that the new error will be listed in the 2018 Scott U.S. Specialized catalog.