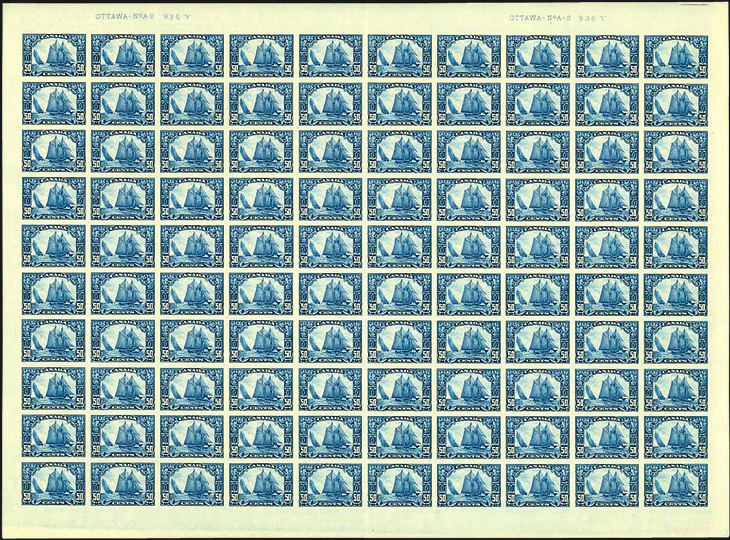 This classic engraved stamp showing two views of the schooner Bluenose has been hailed by many as Canada’s most beautiful stamp, and one of the most attractive stamps in the world.

In an introduction to the auction, Rasdale says only two imperforate sheets have been reported.

Though the 2017 Scott Classic Specialized Catalogue of Stamps and Covers 1840-1940 lists imperforate full panes for some stamps in Canada’s 1928-29 pictorial set, there is no such listing of either panes or sheets for the 50¢ Bluenose issue.

The 2017 Unitrade Specialized Catalogue of Canadian Stamps estimates that 250 imperforate pairs exist, but also does not list a full imperforate sheet.

The sheet in this auction is part of the impressive collection of Buddy Sokolick, the longtime head of the production department for Jam Productions in Chicago who died late last year.

The stamp sheet auction lot description notes a “vertical crease through the center which caused a tiny tear in margin.” The auction lot also shows a 1970 letter from famed dealer Kasimir Bileski describing the sheet, saying “no one anywhere, collector or dealer can produce a complete post office imperforate sheet of any value … Enclosed is officially classed as a sheet comprising 2 panes of 50 each of this value.”

The Scott catalog value for a never-hinged imperforate Bluenose pair is $1,150; this sheet is offered by Rasdale with a minimum bid of $7,500.

The Sokolick collection offers other Canadian classics, modern errors and more, including mint and used examples of the 1959 St. Lawrence Seaway invert error (Scott 387a).

Rasdale notes that the auction’s first session offers material from the Empire estate, “an astounding accumulation of collections, stock books, binders, auction and sales pages going back to the 1940s and ending in the early 1970s with strength in United States and Canada.” A nonprofit group helping health and human care initiatives will benefit from the Empire estate sale.

The auction can be viewed online on their website, with online bidding options available.