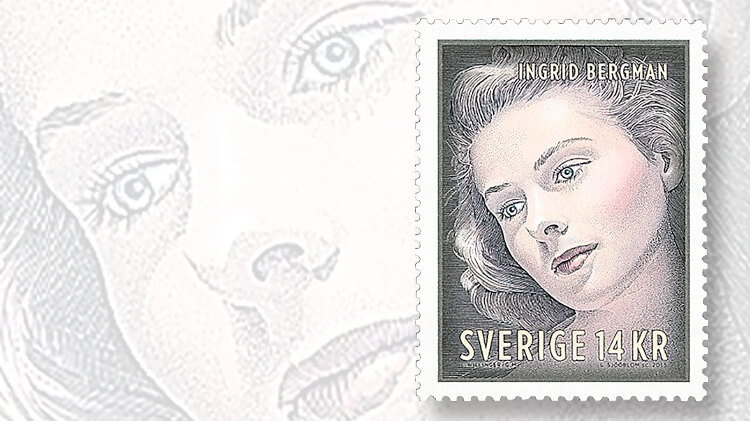 The runner-up for the Nexofil top prize for most beautiful stamp of 2015 was a Swedish Ingrid Bergman stamp, part of a joint issue with the United States. 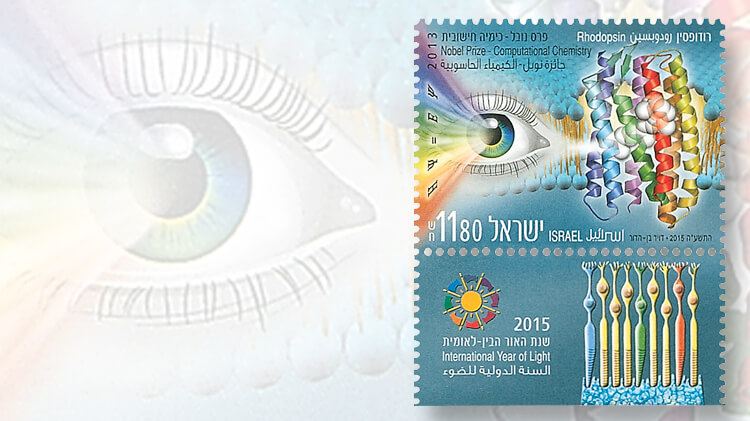 Israel’s International Year of the Light stamp was chosen as the most beautiful stamp of 2015 by the Nexofil jury. The award was presented in October 2016. 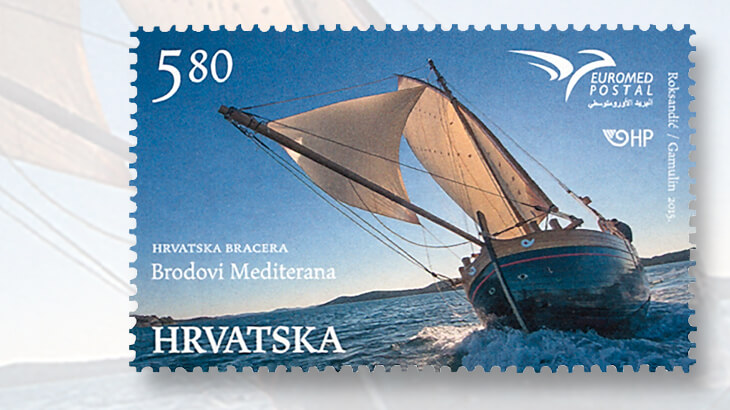 Croatia’s Euromed stamp featuring a photograph of a Mediterranean sailing bracera was selected as the third most beautiful stamp of 2015 by the Nexofil jury.
Previous
Next

Israel’s International Year of Light stamp recently received the Nexofil award for the most beautiful stamp of 2015.

The awards were presented Oct. 28, 2016, in Spain and reported in the November issue of El Eco Filatelico y Numismatico, a Spanish philatelic and numismatic magazine published by the Nexo Group in Madrid.

A Swedish Ingrid Bergman stamp was the runner-up, and a Croatian stamp placed third.

The winners were determined by an international jury comprised of philatelists from more than 20 countries.

According to information from the Israel Philatelic Service, the stamp design represents the Schrodinger equation on the left and the protein rhodopsin on the right. Shown on the attached tab, or label, are the emblem of the International Year of Light and representation of rods and cones, two types of light-sensitive cells in the human retina.

Both the Swedish and U.S. stamps were based on a photograph of Bergman taken by celebrity photographer Laszlo Willinger. The Swedish stamp was designed by Gustaf Martensson and engraved by Lars Sjooblom.

Martin Pingel, head of design at Postnord Stamps, described the design as “a simple, powerful depiction of one of the world’s most well-known actresses of the 20th century.”

The Croatian stamp, issued July 9, 2015 (Scott 964), was part of the multination Euromed series featuring boats of the Mediterranean.

The 5.80-kuna stamp pictures a cargo vessel known as a bracera. The stamp design by Dean Roksandie is based on a photograph by Ljubo Gamulin.

Other first-place awards were presented to stamps and souvenir sheets of Austria, Belgium, France, Liechtenstein, Portugal, South Korea and Uruguay.