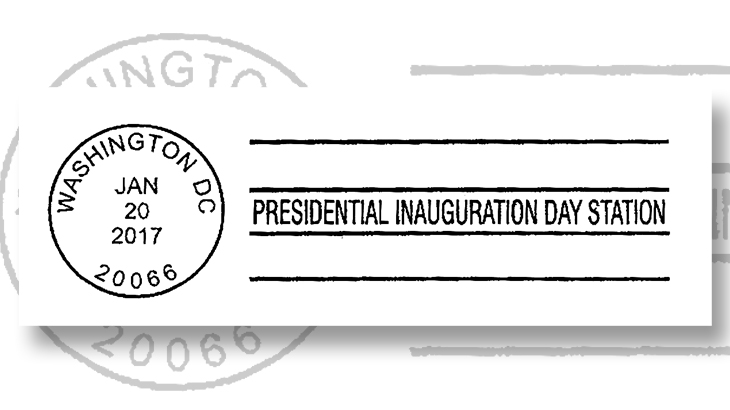 A postmark for the Jan. 20 inauguration of Donald J. Trump as president of the United States will be available from Washington, D.C.

The U.S. Postal Service will offer a circular datestamp with four horizontal bars that includes the words “Presidential Inauguration Day Station” in the middle of the bar markings.

At this time, it is not known if there will be other postmarks available from Trump’s hometown of New York City, or from Columbus, Ind., the hometown of the vice president-elect, Mike Pence.

The format of this new inauguration postmark is similar to the four-bar markings used in the later years of the 20th century. The last two inaugurations for President Barack Obama were commemorated by the Postal Service in Washington, D.C., with larger round pictorial postmarks using the Great Seal of the United States as a prominent feature.

Requests must be postmarked no later than 30 days after the date of cancellation to qualify for service.

Affix correct postage to an envelope or postcard of your choice and address it to yourself or someone else. A peelable removable address label can be used.

Insert cardstock of postcard thickness in the envelope to protect against bending. Place it in a larger envelope addressed to the station name, including the post office address and full nine-digit ZIP code as indicated.

Your envelope or postcard will be returned to you through the mailstream. If you would like your items returned under protective cover (to guard against damage or additional postal markings), include a larger, return envelope, addressed to you and franked with 49¢ (forever stamp) postage. Include a note requesting that the canceled envelope be returned inside the return envelope.

Requests for cancels with stamps and postal stationery not in nationwide release on the date shown in the postmark might not be honored.