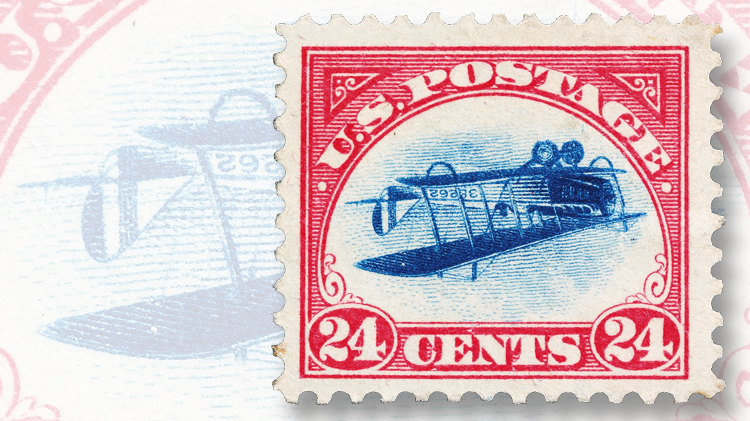 Out of circulation for 99 years, the Position 79 Inverted Jenny airmail error has resurfaced and will be auctioned Feb. 15 by Leslie Hindman Auctioneers in Chicago.

A treasured error stamp that seemingly vanished after its discovery 99 years ago is making a dramatic reappearance.

Leslie Hindman Auctioneers reports that it will offer the Position 79 1918 24¢ Inverted Jenny airmail stamp during a public auction taking place Feb. 15 at the firm’s galleries in Chicago. The stamp has been authenticated by the Philatelic Foundation, according to a Jan. 3 press release, and is hinged, according auction gallery president and CEO Leslie Hindman.

The stamp is part of a collection that has been in the same family for generations, Hindman told Linn’s Stamp News. The family has asked to remain anonymous, she added.

The collection was preserved as a family heirloom, Hindman said, and the current owners are not collectors.

The Inverted Jenny (United States Scott C3a) is the most famous U.S. stamp error, a 24¢ airmail stamp printed in carmine and blue with the central image of the “Jenny” biplane incorrectly printed upside down. One sheet of 100 error stamps was purchased at a Washington, D.C., post office in 1918 by collector William T. Robey; he sold his prize soon after to Eugene Klein, a well-known Philadelphia stamp dealer.

Klein subsequently sold the intact sheet of 100 stamps to the millionaire collector Col. E.H.R. Green, who had Klein break up the sheet into singles and blocks. Green kept some of the stamps and sold others, and efforts have been made to track the history of each stamp from the sheet ever since the story began nearly a century ago.

Two stamps from the sheet of 100 seemingly have no history: Position 49 and Position 79. Both are listed with the simple phrase “No record” in the 1986 book Jenny! by George Amick, one of the most authoritative studies of the history of the prominent stamp error.

A website devoted to the Inverted Jenny was launched last year by Robert A. Siegel Auction Galleries in New York City. The Jenny site pictures 98 of the 100 error stamps, with blank spaces at positions 49 and 79.

Hindman told Linn's that the consigning family does not have historical information about how their Jenny Invert stamp was acquired.

Philatelic Foundation curator Lewis Kaufman and executive director Larry Lyons led the process of expertizing the Jenny Invert that will be auctioned.

“Based on its extensive electronic and photographic records of this rarity, the PF was able to certify that the Jenny Invert was genuine and came from position 79 in the sheet of 100, one of only two positions which have not been seen in the marketplace since the stamp was issued almost 100 years ago.”

Just nine months ago, the Philatelic Foundation authenticated another long-lost Jenny Invert, the Position 76 stamp that had been stolen in 1955 when it was part of the McCoy block of four.

The block was purloined from an American Philatelic Society exhibit in Norfolk, Va., and turned up in Northern Ireland where it was found among items presumably purchased in a flea market setting years ago.

The stamp was returned to the rightful owner, the American Philatelic Research Library, by the finder, Keelin O’Neill, during a public event at World Stamp Show-New York 2016.

The Foundation notes that it has issued certificates of authenticity for 85 of the 100 stamps from the original Jenny Invert error sheet.

The Philatelic Foundation is a not-for-profit education institution chartered in 1945. Its many activities include expertization and authentication of stamps and covers.