Keep your eyes peeled for this Danish West Indies stamp 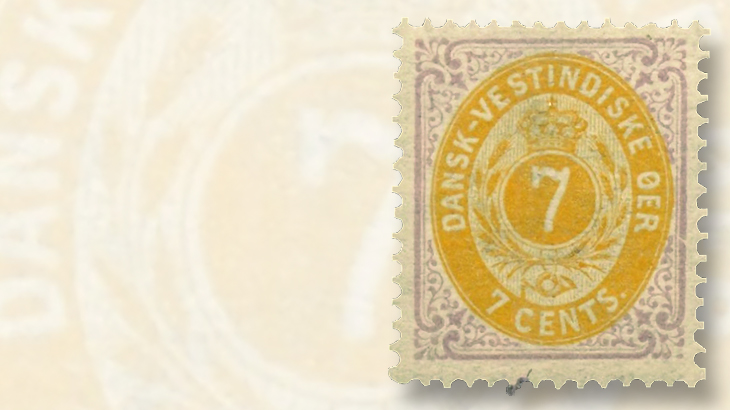 The 1874 Danish West Indies 7¢ Numeral and Crown stamp (Scott 9) is in demand and is a good buy at up to $50 in unused original gum condition.

Danish West Indies was the forerunner of the United States Virgin Islands. The former Danish colony comprises the islands of St. Thomas, St. Croix, and St. John. The colony was begun by the Danish West India Guinea Co. in 1672. When the company collapsed in 1775, the King of Denmark-Norway assumed direct rule of the colony. Slavery was outlawed in 1848, making maintenance of the colony an expense rather than an asset.

The first stamps of the Danish West Indies were issued in 1856 and the last in 1915. Stamps of the colony are of interest to Danish and Scandinavian collectors as well as to collectors of U.S. stamps.

During 1874-79, the colony issued a set of nine Crown and Numeral definitive stamps (Scott 4-13). The 2017 Scott Specialized Catalogue of United States Stamps and Covers values the 7¢ lilac and orange stamp (Scott 9) from the set at $35 in original gum condition. This stamp is in demand and is a good buy in the grade of very fine at up to $50.