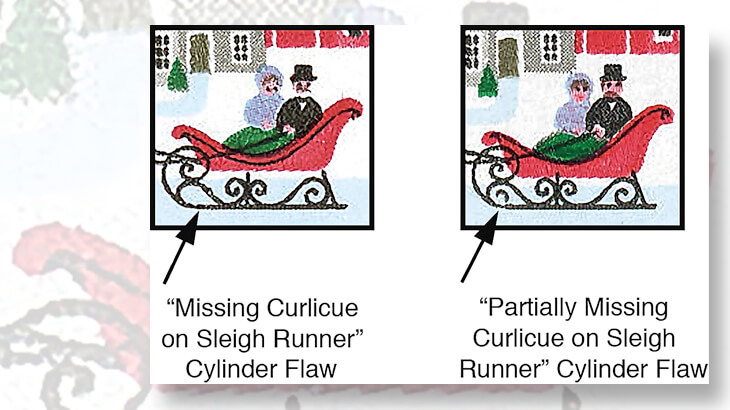 Two plate flaws exist on the 1988 25¢ Christmas stamp, as shown in this illustration from the Scott Specialized Catalogue of United States Stamps and Covers. 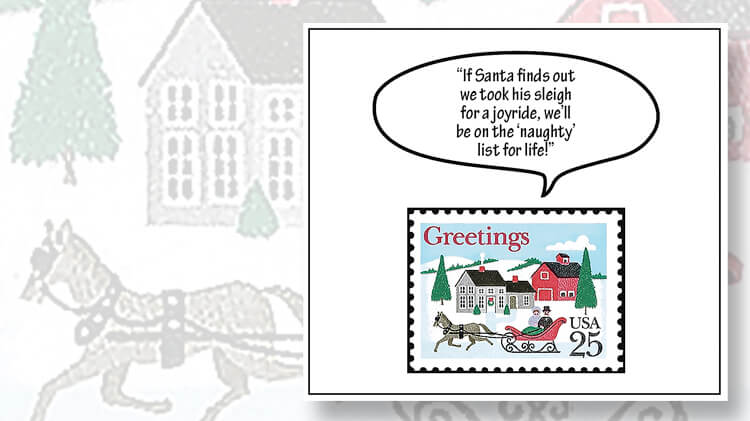 The cartoon caption contest for December featured the 1998 25¢ Christmas stamp picturing a one-horse open sleigh and a village scene. Two plate flaws can be found on this stamp: a missing and partially missing curlicue.

Those plate flaws energized many of the entrants in the contest. Arthur Richardson of Swampscott, Mass., turned the situation into “No, Dear, Last time we loaned Santa our sleigh, he broke it!”

Another approach was “Go slowly, sweetheart, we just got a recall notice on the sleigh due to faulty curlicues,” by David Schwartz of Commack, N.Y.

The south end of the horse inspired another group of entries. An example comes from Priyesh of Mumbai, India: “I told you, don’t let the horse feed on that smelly radish from our garden! Now I have to sit sideways.”

Somehow, presidential politics seems to have entered into just about every contest in 2016. For the December contest, a small group of entries seemed to focus on the wealth of the president-elect. A great example comes from Wayne Slama of Plano, Texas: “Oh, look over there. It’s Pres. Trump’s twelve horse open sleigh!”

The nonphilatelic winner for December was from Richard Schretter, sent by email.

The contest winner on the philatelic side is from Charles Wales of Ashburn, Va., who puts the illustration in the 1890s time period: “These Columbians we got on our Christmas packages should soak off without any problem.”

“Look, there! Why can’t we decorate our house like the Griswold’s?” by David Vikan of Dickinson, N.D.

“Hmmm … I can’t find the app that controls the brown thing pulling this sleigh,” by Kenneth Gleba of Tulsa, Okla.

“Will trade: One-horse open sleigh for a 2017 Mustang!” sent by Dale Stout of Colorado Springs, Colo.

“James! Keep your eyes on the road. Never mind that hussy in the skimpy skating outfit,” by Bradley Miller of Huntsville, Ala.

“That was hilarious! You really sleigh me!” by Steve Kotler of San Francisco, Calif.

The next cartoon caption contest will be announced in the Feb. 13 Linn’s.