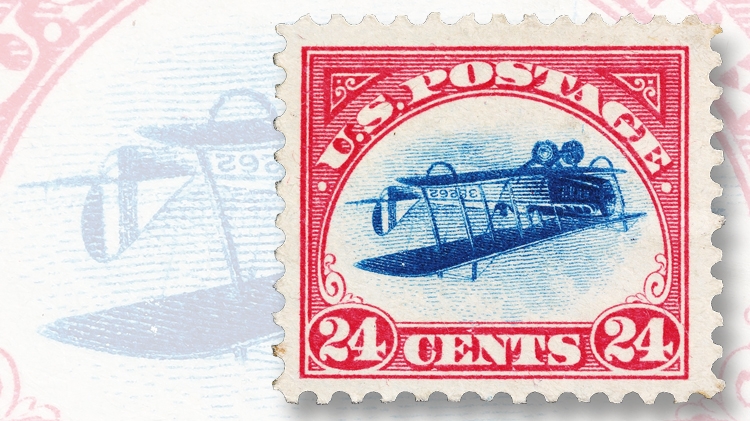 Its whereabouts unknown for almost a century, this 1918 24¢ Jenny Invert error from position 79 resurfaced only weeks ago, and will be offered at auction Feb. 15 by Leslie Hindman Auctioneers of Chicago. 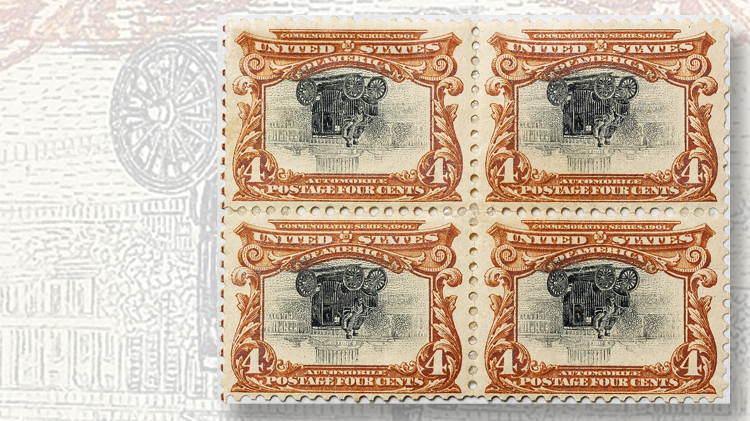 A 1901 4¢ Pan American center-inverted block of four, described by Leslie Hindman as “previously unrecorded,” is also offered in the firm’s Feb. 15 auction.
Previous
Next

On Feb. 15, Leslie Hindman Auctioneers of Chicago will offer what the firm calls “The Lost Jenny 79 and Other Inverted Planes, Trains and Automobiles.”

It’s a 26-lot sale that includes single-stamp lots and small collections of classic issues and airmail errors from the United States and around the world.

A standout in this sale is the U.S. 1918 24¢ Jenny Invert airmail error (Scott C3a) from position 79 of the original discovery sheet of 100. Absent from public view for almost a century, the whereabouts of this stamp were unknown until it was brought to light Jan. 3 in the announcement of the Hindman sale.

Jenny Invert last seen in 1918 resurfaces, set to be auctioned: A treasured error stamp that seemingly vanished after its discovery 99 years ago is making a dramatic reappearance.

According to the auction firm’s CEO, Leslie Hindman, the family that has owned the Jenny Invert all these years does not have historical information about how their stamp was originally acquired.

The Philatelic Foundation in New York City has authenticated the stamp, describing it as “genuine, with original gum, partly disturbed from hinge removal, small thins and a small paper clip impression at right.” It is offered with a presale estimate of $200,000 to $300,000.

The sale also includes what is described as an unknown block of four of the 1901 4¢ Pan American Automobile stamp (Scott 296a).

The stamps are pictured here against a white background, as shown in the Hindman auction catalog.

The Foundation also authenticated the block, stating, “It is genuine, unused, with slightly disturbed O.G. [original gum], the block with some rejoined horizontal perforations at right, a small horizontal crease at top right, the top left stamp partly reperforated at top, and the bottom right stamp with a diagonal crease.”

An unused vertical tete-beche pair of the 1877 5¢ Buffalo Balloon stamp (Scott CL1) is signed on the back in pencil by aerophilately expert Nicolas Sanabria (1889-1945). It is listed as an air post semi-official stamp in the Scott Specialized Catalogue of United States Stamps and Covers.

The pair’s Foundation certificate notes that it is genuine with no gum and a natural horizontal crease between the stamps. The presale estimate is $5,000 to $7,000.

A few of the lot groupings comprise dozens of stamps, such as a collection of U.S. definitives from 1912-17, including single stamps and blocks of four, all unused. Many of the stamps are listed with no condition details.