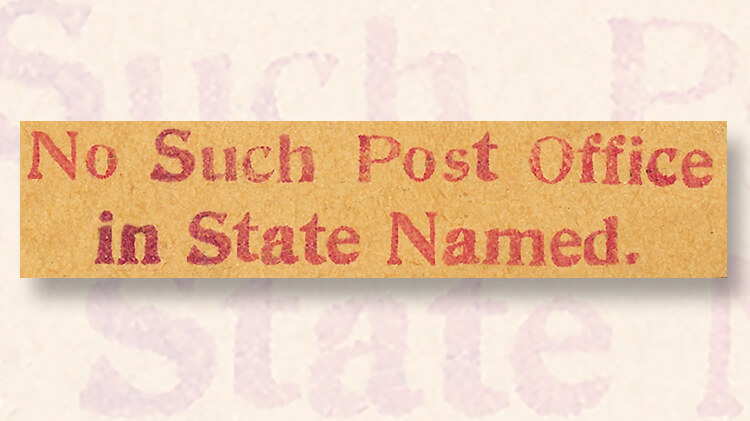 Only one example of this marking — “No Such Post Office in State Named” — on Form 3578 has been seen by the author. 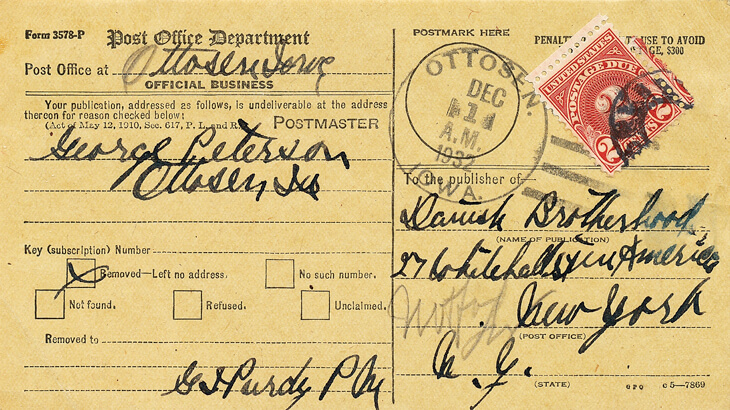 An early fee-required example of Form 3578, this 1932 use of the form had its fee paid with a precanceled 2¢ postage due stamp. The publisher paid to receive the form but got no information about the subscriber’s whereabouts. 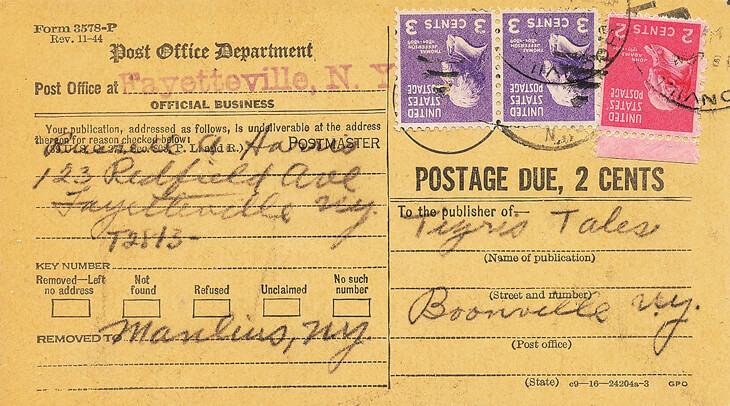 This circa 1946-47 use of Form 3578 shows that four copies of Tigris Tales were undeliverable and 8¢ in fees was paid. Though four publications were indicated, only one subscriber address was given; this column provides a possible explanation.
Previous
Next

My latest book, Insights into U.S. Postal History, 1855-2016, is now available through the American Philatelic Society. In it are 12 chapters that discuss in detail subjects on which I have done extensive research over the past five or so years. In addition, there is one chapter on bar codes by Doug Quine.

I have already started research on yet another topic: how United States postage due stamps have been used since they were introduced in 1879.

My reason for this is that it has become clear to me that there are a surprising number of ways in which these stamps have been used since they were introduced, and until they were finally discontinued in October 1986. In fact, my list now hovers near 30 different uses, and in almost every case there are previously unknown nuances to their use that I am discovering.

Also, what is interesting to me is that the Post Office Department hasn’t recognized many of these uses in its official documents.

Basically, I believe that there are two ways in which U.S. postage due stamps were used: first, in some way to indicate payment of shortpaid or unpaid postage; and second, as a type of receipt for services rendered.

Over the years in this column, I have discussed some of these uses, and over the next months I plan to consider other uses. In this month’s column, I will discuss the use of Form 3578, a form that was a type of receipt for services rendered.

Amend Section 679 as follows: The notice to the publisher that copies of his publication are undeliverable at the address thereon, as required by the preceding section, shall be on Form 3578, which shall be filled out in duplicate, the original to be retained by the postmaster and the duplicate sent to the publisher. The retained copy shall be filed by the postmaster and shall constitute a record of notices sent to publishers.

At first, from 1911 to 1932, there was no charge for this notification. However, Postal Bulletin 15971 (Aug. 5, 1932) announced that by Order No. 2572, Section 617 of the United States Postal Laws and Regulations was amended by the addition of the following as paragraph 1½: “There shall be a postage charge of 2 cents for such notice regarding undeliverable copies, which shall be collected from the publisher upon delivery of the notice.”

In the first illustration is an early (Dec. 1, 1932) fee-required example of this form, which was used to indicate that the publication Danish Brotherhood was undeliverable to one George Peterson.

There was no “Key (subscription) number” given, and because the addressee was “Removed — Left no address,” there was no forwarding information to give to the publisher.

In this case, the postage due that was collected was indicated by the precanceled 2¢ postage due stamp (Scott J71) placed on the Form 3578. By the way, the “Key number” was the vital information the publisher needed in order to locate the subscriber in his records.

I have searched the Postal Bulletin archives for references to Form 3578 and found many admonitions to postmasters who did not adequately fill out the form; for instance, giving an inadequate key, subscriber name, forwarding address, reason for non-delivery, and/or no postmark. A failure to include any of these pieces of information meant that the returned form was filled out inadequately.

Even though Postal Bulletin 15971 indicates that postage due stamps were to be used to indicate payment of the notification fee, the second illustration shows an example of this form that demonstrates another way in which the collection of the fee for the return of Form 3578 was indicated, using non-postage due stamps.

With the placement of three stamps from the Presidential series on the form, totaling 8¢ (one 2¢, Scott 806; and two 3¢, Scott 807), this circa 1946-47 use of the form denotes to the publisher that four copies of Tigris Tales were undeliverable, and indicates that the publisher paid for this information regarding four undeliverable copies of his publication.

Thus, we see that multiple copies of the form could be paid for, with the payment made on only one copy of the several returned to the publisher, and where the other copies had no stamps on them.

Unfortunately, the information on this example of Form 3578 gives the required information for only one undeliverable item, and gives only a partial forwarding address (this might be all the information the postmaster had).

The third illustration shows an unusual type of rubberstamped marking I found on one example of Form 3578: “No Such Post Office in State Named.”

This statement indicated that the address on the publication was to a city or town that did not exist in the state addressed. I have seen only one such example of this marking on Form 3578.

My overall point is that, as ubiquitous as this form is, there are still important variations in its use that are to be noted.