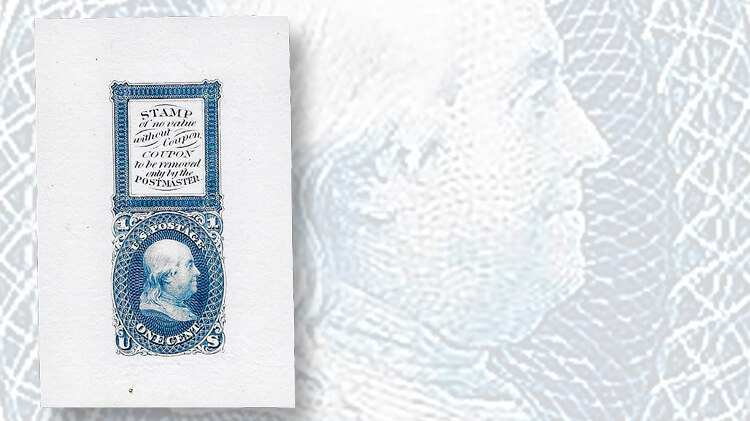 This example of the George Bowlsby coupon essay is printed in blue (Scott 63-E13a). 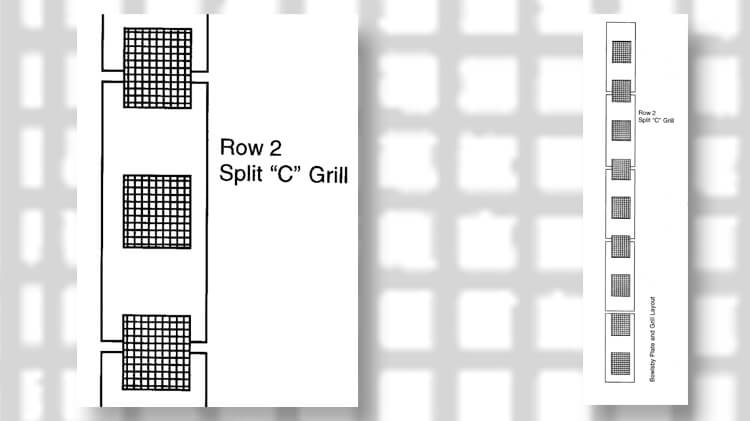 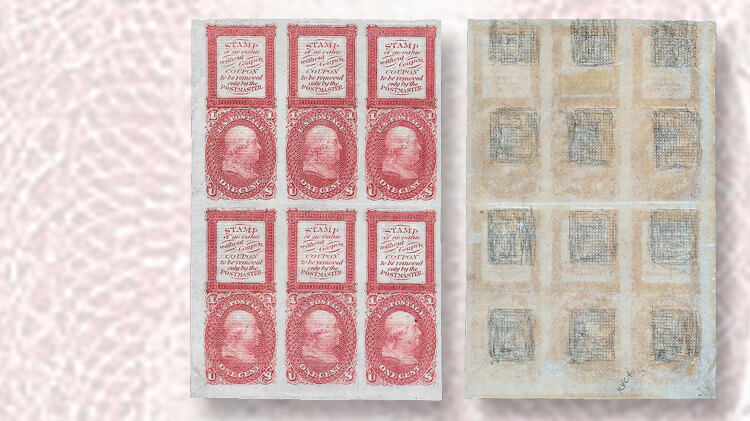 By 1865, the National Bank Note Company was determined to acquire the rights to any and all prevention and reuse patents that might pose a threat to their contract to produce United States postage stamps.

George Bowlsby’s coupon essay patent was one of these acquisitions. National Bank Note went so far as to engrave a die and enter a plate of 50 subjects. Production commenced of red and blue varieties, both perforated and imperforate.

An example of the Bowlsby die essay in blue (Scott 63-E13a) is shown in the first illustration.

One of the red imperforate sheets (Scott 63-E13d) was removed from the files and subjected to being grilled in either 1867 or early 1868. This variety became Scott 63-E13e. This listing also includes a sub-variety referred to as a “split grill,” which is the subject of this column.

This is the only large multiple of this essay that I know of that still exists. This block is pictured front and back nearby. It is a block of three over three from the lower left corner of the sheet, as indicated by the large selvage at the left and bottom.

To make the grills easier to see, I carefully applied graphite to the back of the block.

I acquired this lot with the hope that it would answer the age-old question about the position of the split grill. I have long thought that only one sheet was produced with the split grill.

Over the past 40 years, I have recorded no more than three examples with a true split grill. The Finkelburg block provided the answer.

I believe that the split-grill examples come from a single 50-subject sheet. If my theory, which follows, holds up, there can be no more than a total of 10 split-grill examples, which comprise the entire second horizontal row of the sheet. The drawing shown nearby provides a visual illustration of my theory.

The original Bowlsby coupon essay plate was laid out with 10 subjects across and five rows down for a total of 50 subjects. Each entry is 48 millimeters tall.

This can be compared to a vertical pair of the 1¢ Benjamin Franklin stamp (Scott 63), which is 52½mm tall including the spacing between the stamps. This makes the vertical layout height of the essay plate about 18mm less than a typical 1¢ 1861 stamp plate.

The experimental “C” grill roller contained the same number of grills as a stamp plate, 100. The grills were laid out on a roller 10 across and 10 down just like the stamp plate.

This was done so each stamp would receive a grill impression when the sheet was grilled. Therefore, each of the Bowlsby plate essays should have received two full grill impressions.

Working from bottom to the top, each essay of the bottom row has two full grill impressions. The fourth row has one full impression and 13 of the 15mm of the second grill.

The top row would contain half a grill at the bottom and a full impression above it. Thus the true Bowlsby with the split “C” grill can only come from the second horizontal row of 10.

If you have an example of the Bowlsby split grill, I would like to see it. Please email a scan of both the front and back to me at the address below.

James E. Lee has been a full-time professional philatelist for more than 25 years, specializing in United States essays and proofs, postal history and fancy cancels. He may be reached via email at: jim@jameslee.com or through his website: www.jameslee.com.