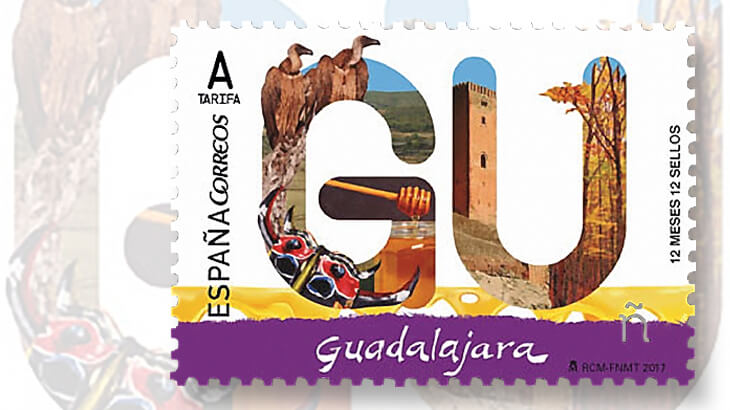 Spain will highlight 12 of its provinces on stamps to be issued this year. The first stamp in the series presents Guadalajara. 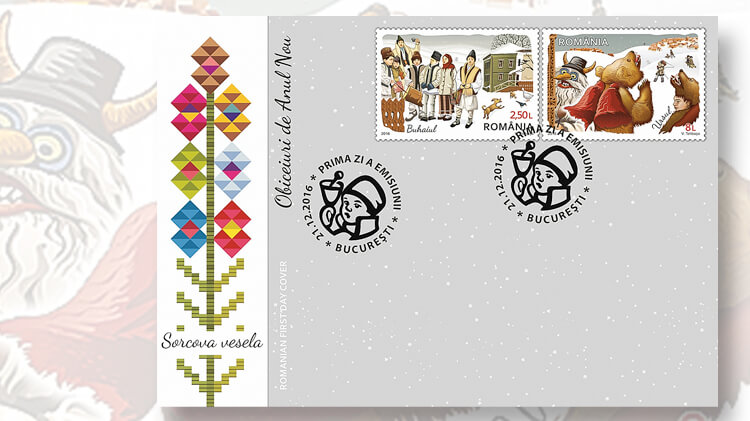 Romania issued four stamps Dec. 21, 2016, featuring some of its New Year customs. The stamps on this first-day cover represent the buhai drum and bear dance. 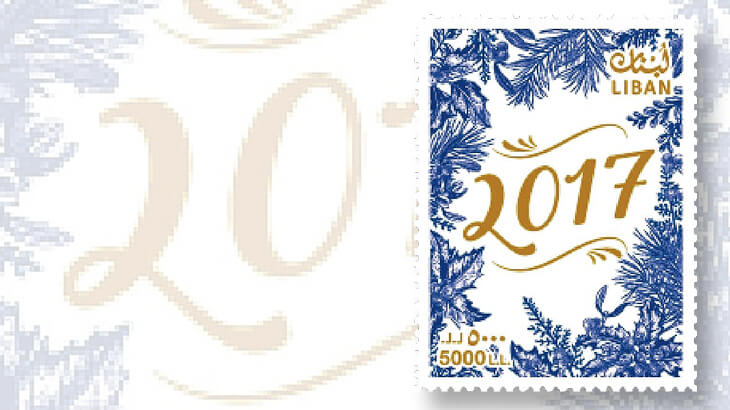 The main design of this stamp from Lebanon is the year date “2017.” 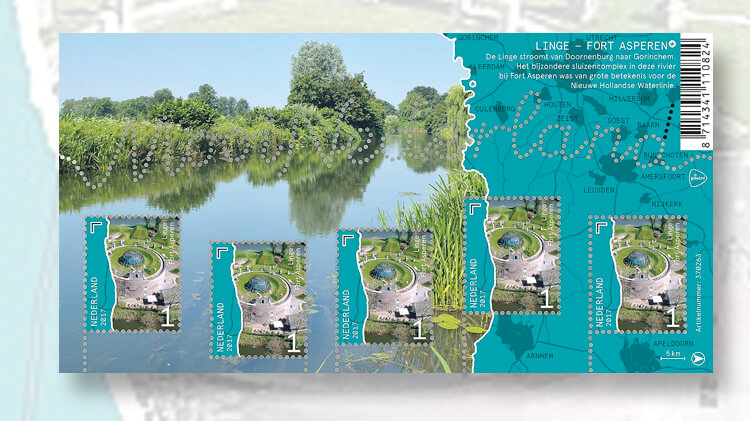 The latest Beautiful Netherlands stamp series focuses on streams and river valleys. This pane of five showcases the Linge River.
Previous
Next

Spain’s post office, Correos, started the year with a new stamp series that highlights a different province each month.

The Guadalajara stamp is nondenominated. The “A” in the upper left indicates that this self-adhesive pays the basic domestic rate, currently €0.50.

The large “GU” in the center of the design is based on the code that was once used for Spanish license plates. Scenes of Guadalajara are shown within the letters.

The “G” includes two griffon vultures, honey from the Alcarria, and a botarga mask. A tower of the Castle of Molina de Aragon and an autumn scene of beech trees in Hayedo de Tejera Negra Natural Park are pictured inside the “U.”

The band of purple across the bottom of the stamp represents the province’s flag.

Spain’s national printer printed the stamp by offset in sheets of 50.

In 2017, the Beautiful Netherlands stamp series will highlight Dutch streams and river valleys.

The Netherlands’ PostNL introduced the Beautiful Netherlands series in 2005 to focus on the country’s “local history, cultural wealth and scenic beauty.”

The first three Beautiful Netherlands stamps for 2017 will be issued Jan. 31 in panes of five.

All three stamps are nondenominated; the “1” in the lower right indicates that they pay the basic domestic rate (€0.78 as of Jan. 1).

The stamps feature the Linge River, the Drentsche Aa, and the Reest, respectively

The Linge runs approximately 62 miles from Doornenburg in the east to Gorinchem in the west.

The stamp shows a photograph of Fort Asperen, built along the river in the 19th century. A small part of a map of the river is shown on the left side of the design.

A larger topographical map is pictured in the selvage of the pane. An asterisk marks the location of the fort, and a scale and a stylized compass point are in the lower right. A postcard view of the river also is shown in the selvage.

The other stamps and their panes are similar in format.

A Saxon farmhouse is pictured on the Drentsche Aa stamp.

The tourism website www.holland.com says of the area: “The Drentsche Aa is the last stream of the Netherlands that has, for centuries, freely meandered through the landscape. Follow the Drentsche Aa and you will pass through a valley landscape full of woods, heathlands, sand dunes and hayfields. In this region, you will also encounter various cultural and historical monuments including dolmens, prehistoric burial mounds and ancient Saxon farms.”

The Reest stamp pictures a 19th-century church in Old Avereest. This small river borders the provinces of Drenthe and Overijssel.

Brun said of the Reest River valley: “So much nature, tiny villages. The photo of the Reest that we used is also special because you can see how the landscape looks during a flood. I didn’t realise that the Netherlands was so empty, could be so still. And so beautiful. We tried to reflect this as much as possible in the stamp sheetlet. It is a beautiful area — the stamps invite people to go walking through the Reest river valley.”

The design of this £5,000 stamp shows “2017” in gold in the center and surrounded by cedar boughs and other foliage in blue.

The 2.20-leu stamp represents Plugusorul, which translates to “little plow.” In this tradition that dates back to ancient times, people in the countryside walk from house to house on New Year’s Day playing musical instruments and reciting a verse in exchange for wishes for a prosperous year, bread, fruit, or money.

Another musical tradition, buhai, is shown on the 2.50-leu stamp. Buhai, which translates to “bull,” is a friction drum that makes a booming sound. Like Plugusorul, the buhai tradition involves people going house to house, but on New Year’s Eve instead of the next day, according to the philatelic bureau, Romfilatelia.

Costumed dances are depicted on the other two stamps: the bear dance on the 8 lei, and the goat dance on the 15 lei.

In an article on the website of Radio Romania International, Monica Chiorpe explains the bear dance: “According to a pre-Christian tradition, a number of rituals were performed on New Year’s Eve to ward off bad spirits and persuade the sun to stay longer in the sky. These groups of traditional carollers are today a popular tourist attraction.

“On New Year’s Eve, they put on the costumes they have inherited from their predecessors and go carolling from house to house. In Moldavia, in the east and north-east, a similar ritual is known as the ‘bear’s dance.’ Young men dressed in costumes made of bearskin and accompanied by musicians and drummers walk through every street in the village striking their whips in the air. People welcome them into their homes and ask them to perform the ‘bear’s dance’ in their gardens as part of a fertility rite.”

The goat dance symbolizes death (the old year) and rebirth (the new year). A flute player provides the music for this traditional dance.

A fifth New Year’s custom, the sorcova branch, is shown on the cachet of Romfilatelia’s official first-day covers for the stamps. This stick decorated with flowers has been compared to a magic wand.

Victora Telibasa designed the Romanian stamps. They were produced in sheets of 32 and in panes of five stamps with one label.