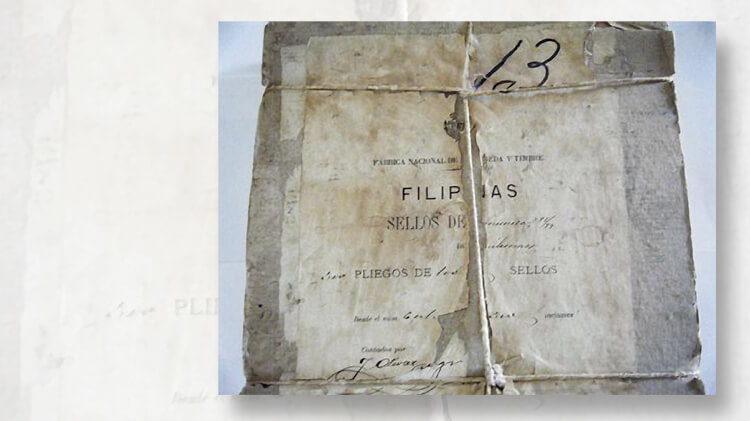 The number 13 is written on the top of this straw-bound bundle of 500 sheets of the Philippines 1898 2-milesimas stamps. This unopened bundle was recently purchased at an auction. 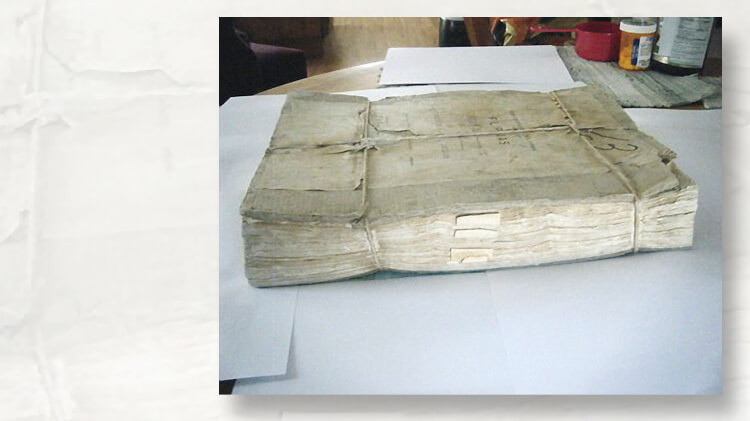 The front of the carton containing the bundle of Babyhead stamps issued in 1898 by the Philippines.
Previous
Next

By Don Peterson and Richard Miggins

Every once in a while, collectors come across something that is really cool. Recently, Don won, in auction, an original, unopened, straw-bound, 500-sheet bundle of sheets of the Philippines 1898 2-milesimas issue (Scott 193).

The 2m stamp is from a set of stamps known as the Babyhead stamps because they feature the portrait of King Alfonso XIII as a child.

The bundle of new stamps had never been opened and was in the original straw-bound parcel shipped from the National Stamp Factory in Madrid, Spain, to Manila in late 1889. This stamp and 19 other Babyhead denominations were issued to the public in Manila on Jan. 1, 1898.

The bundle contained a total of 50,000 stamps. According to Postage Stamps of the Philippines by J. Murray Bartels et al. (1904), 700,000 2m stamps were printed and shipped to Manila, and if our math is correct, that would be a total of 14 separate bundles of the 2m issue. Interestingly, the number 13 was written on the top of this bundle.

Given that the Babyheads’ use abruptly ended in June 1898, and the only need for the 2m stamps was the 1898 newspaper rate to Spain and colonies, it is not surprising that some bundles were left unopened. Seven hundred thousand is a lot of newspapers to Spain!

The following historical novella is an imaginary tale of intrigue, death, and love that followed this bundle of stamps from 1898 in Manila to Don’s stamp room.

It was a hot day in June 1898 but not unusual in Manila, as American soldiers slowly advanced down the Escolta in Binondo, toward the Manila post office, often referred to as Calle Escolta de la Reina.

Miguel Jacinto, a postal clerk working under his Spanish supervisor, knew his job was about to end. This would be a disaster for Miguel, because his daughter, Maria, desperately needed medical care.

As the Americans approached the post office, Miguel reached for the closest object of value that might be sold on the black market to help pay Maria’s medical expenses — a single bundle of unopened stamps — and fled.

Tragically, while fleeing in terror out the back door of the post office with his bundle in hand, Miguel was killed in a freak horse versus pedestrian accident. An Army colonel, Edward Anderson, from the Minnesota Volunteers, was riding his horse near the back entrance of the post office, when a loud noise spooked the horse. The horse reared up, only to come down on the head of the fleeing postal employee, killing Miguel instantly.

Col. Anderson stopped, but there was nothing he could do for the poor man. He noticed the bundle, picked it up, and rode off. The colonel stayed on through the Spanish-American War, and then through the Filipino-American War.

It was 1902. Manila was still in turmoil, wracked with the sudden end of more than 300 years of Spanish rule, only to have that rule replaced by another landlord — the Americans.

Later, Edward left the Army, met a beautiful Filipino woman, and they were married. Eddie, as his neighbors called him, was a happy, friendly man. He decided to stay in the Philippines, and he and his wife bought a small, quaint home in the Makati suburb of Manila.

The bundle of stamps, secreted inside a wall in his house until it was safe to sell them, was all but forgotten. Time passed. The bundle of stamps was not found until the house was demolished many decades later to make room for a McDonald’s.

Reynaldo Arturo, the contractor employed to tear down the house, discovered the bundle of stamps. A small, soiled note attached to the back of the bundle simply said, “For Maria, my loving daughter, Miguel Jacinto.”

On a hunch, the contractor, Reynaldo asked one of his neighbors, Juan Jacinto, if he knew of a Miguel Jacinto in his past. Surprisingly, he did.

Miguel Jacinto was his grandfather, and he had once been employed as a postal clerk in the Spanish post office. That was all he knew about him.

The contractor, in respect for the family, gave the bundle of stamps to Jacinto.

Juan Jacinto contacted his aging aunt, Maria, residing in Makati Gardens Assisted Living. She confirmed she was Miguel’s daughter. She knew nothing of her father’s effort to find money to resolve her medical problem at that time, although she eventually recovered from her illness.

Maria, with the help of Juan, pieced together a surprising story: Maria, a beautiful woman in her youth, was attracted to and eventually married a young, dashing Army colonel. His name was Edward Anderson.

Ironically, and in their last years, Maria and her aging husband Eddie connected her father’s tragic death with her husband’s oft-told horse tale. The full story was finally revealed.

Too much time had passed. Feelings of anger never materialized. In fact, the opposite. The colonel was overcome with sadness, but very sorry. Feelings and tears were shared between them, rekindling more than ever their love for each other.

What happened to the stamps? Following Eddie and Maria’s passing, the bundle was sold to a local stamp dealer in Manila, who in turn consigned it to an auction house, where it was purchased by an eccentric Philippines stamp collector in the United States.

The bundle of old stamps had finally revealed the truth, connecting Maria’s love of her long-passed father with her love for her husband, the retired Army colonel.

We had fun writing this imaginative tale. Could it be the start of another James Patterson novel?

This tale was first published in the Philippine Philatelic Journal, Third Quarter, 2016.