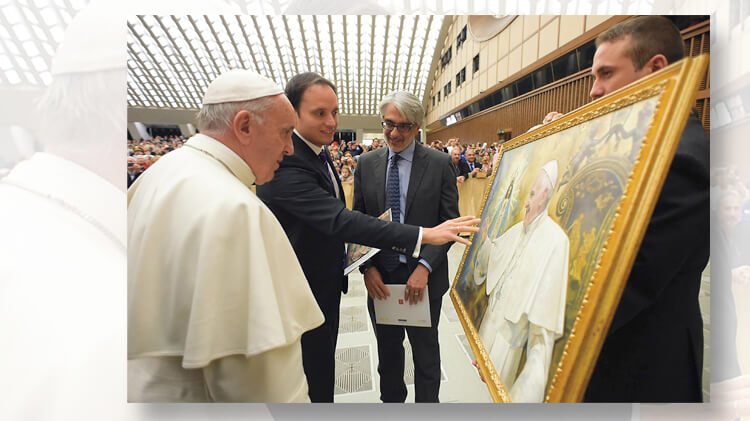 Artist Raul Berzosa Fernandez presented to Pope Francis the painting he created that appears on the stamp celebrating the pope’s 80th birthday. 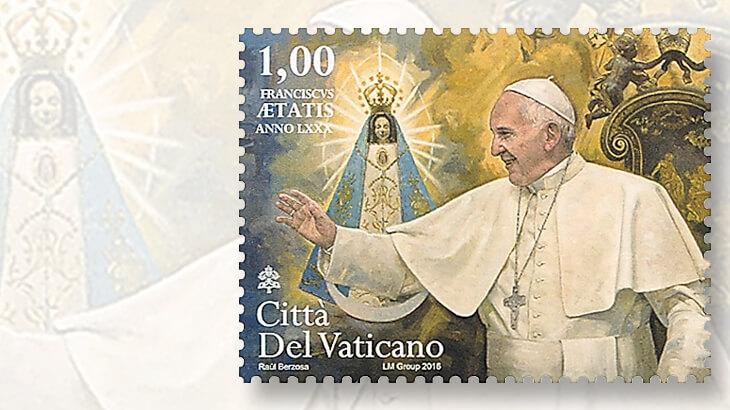 Vatican City issued this stamp Nov. 17, 2016, to commemorate the 80th birthday of Pope Francis.
Previous
Next

A photographer captured the philatelic moment at the Paul VI Audience Hall in the Vatican as 37-year-old Spanish artist Raul Berzosa Fernandez presented to Pope Francis his painting used as the design for a stamp commemorating the pope’s 80th birthday.

Berzosa’s paintings cover a wide range of themes; however, he has a distinct fondness for biblical scenes.

His painting for the stamp depicts with great realism the pope giving a blessing. The painting also has a sacred and symbolic dimension, including a detail of the Bernini baldachin over the main alter in St. Peter’s Basilica; Our Lady of Lujan, patroness of Argentina; and a light, symbolizing the Holy Spirit, illuminating the face of the pope and the entire painting.

The painting is on display at the philatelic museum of the Vatican Museums.

The artist was introduced to Pope Francis by the Vatican’s philatelic bureau manager, Mauro Olivieri (pictured at right).

Olivieri revealed that Berzosa has also painted a portrait of Pope Emeritus Benedict XVI, who will celebrate his 90th birthday on April 16. Vatican City plans to issue a commemorative stamp for the occasion.