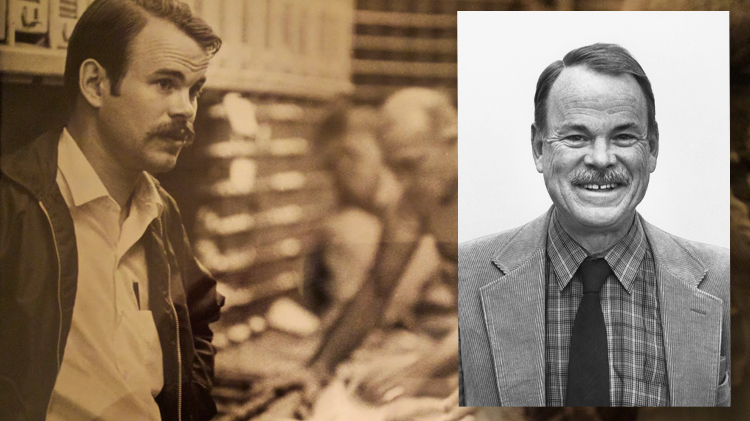 Rob Haeseler as a young reporter for the San Francisco Chronicle (left), and when he joined Linn's Stamp News as a senior editor in 1995.

Robin N. “Rob” Haeseler, an American journalist, a former trustee of the American Philatelic Research Library and a senior editor with Linn’s Stamp News for almost 10 years, died Jan. 16. He was 75 years old.

He found employment in a stamp store as a youngster before studying at the University of Vermont. He was a rural letter carrier during the college’s Christmas break and graduated in 1964 with an English degree.

He also studied art, and was an accomplished painter and photographer throughout his life.

He continued his studies at the University of California at Berkeley, where he was in the first graduating class to award a master’s degree in journalism.

As a graduate student, Mr. Haeseler took a part-time job with the Mark Twain Papers, preparing unfinished manuscripts for publication. His interest in Twain’s writings remained with him all his life.

Hired as a reporter for the San Francisco Chronicle in 1967, he spent decades writing some of the paper’s top news stories, including his reports of the FBI’s investigation of the Unabomber attacks. Years later, Mr. Haeseler assembled a slide presentation on the subject of Unabomber postal history that was enjoyed by participants at the American Philatelic Society’s Summer Seminar in Philately.

In 1988, he authored the book The Behring Collection: A Representative Selection, on the subject of classic automobiles. Mr. Haeseler was nominated by the Chronicle for a Pulitzer Prize in 1992.

He was hired three years later by Michael Laurence, then editor-publisher of Linn’s Stamp News, for the position of senior editor.

Mr. Haeseler wrote hundreds of engaging and insightful articles while working at Linn’s, quickly earning the respect of the Linn’s staff and of stamp enthusiasts worldwide. From 1999 into 2000, the veteran reporter followed up on the reappearance of a near-twin to the unique British Guiana 1856 1¢ Magenta that had been declared a fake by the Royal Philatelic Society London. In 2002, his investigative skills were tapped to write a history of the Grinnell Missionaries just as 58 examples of the controversial Hawaiian stamps were provided to the RPSL for authentication.

For several years he entertained readers with his regular column, The Artful Accumulator, which often brought to light unusual postal history, such as fish-shaped postcards produced and mailed in the 1960s. In a 2004 column, he shared recently unearthed details about his great-grandfather, Albert Willis Locke, whom he discovered was a pioneer publisher of stamp literature.

He also pursued postal uses of the 32¢ Bugs Bunny stamp issued in 1997 (Scott 3137-3138). He built a well-received single-frame Bugs Bunny exhibit he dubbed “Hare Mail,” and he delighted in explaining that his last name could be interpreted as a German term for rabbit-keeper.

After leaving Linn’s in 2005, Mr. Haeseler worked for a time as the APS director of administration. He was twice elected a trustee of the APRL, serving from 2007 to 2016.

As chairman of the APRL’s McCoy Reward Committee, he was active in the effort to track down the two Jenny Invert stamps still missing from the McCoy block of four stolen in 1955. One stamp turned up last year in Northern Ireland.