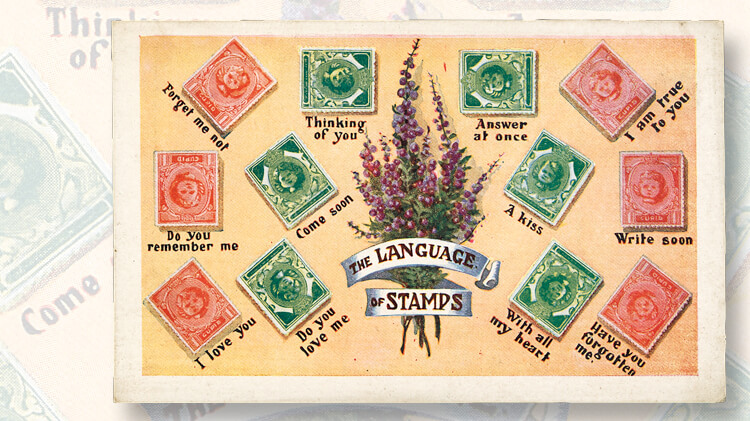 Postcards presenting the “language of stamps” are found from many countries. This English-language example indicates that the placement of the 1¢ Franklin stamps on the cover in the first illustration asks, “Do you love me?” 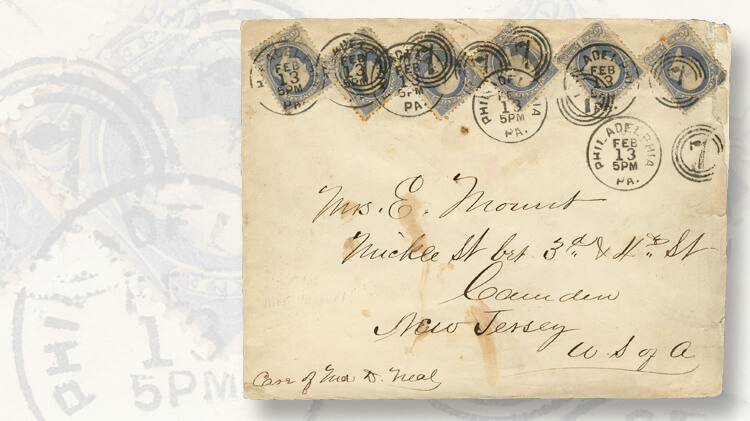 Multiple uses of a single stamp are unusual, but this cover franked with six 1¢ Franklin stamps is more unusual than most because it is an example of the “language of stamps” on what is probably a Valentine’s Day card.
Previous
Next

As a fan of multiple uses of a single stamp on cover, the Philadelphia double-weight (6¢) cover shown nearby caught my eye. Canceled on Feb. 13, it likely contained a Valentine’s Day card.

The year of cancellation is not part of the cover, but it would have been subsequent to the 1881 issuance of the stamp, the 1¢ gray-blue Franklin (Scott 206).

But, more than the number of stamps, their orientation — upside-down and tilted to the left — also made this cover a must buy.

Another of my hobby horses since I first wrote about the subject many years ago is what has come to be called “the language of stamps.”

A worthwhile collection of international postcards can be made showing how the language was interpreted in other, mostly European, countries.

But right now we are concerned with the English-language version, so the postcard shown nearby is on point. Produced by Central Publishing Co. in Glasgow, Scotland, the card uses British stamp models to illustrate the different messages conveyed by how a stamp is positioned on a cover.

According to the guide on the postcard, the 1¢ Franklin stamps on the envelope ask, “Do you love me?”

Given that young lovers of the time were aware of the code, it would be interesting to know if the addressee responded in kind.

One of the most interesting Christmas cards you’ll come across