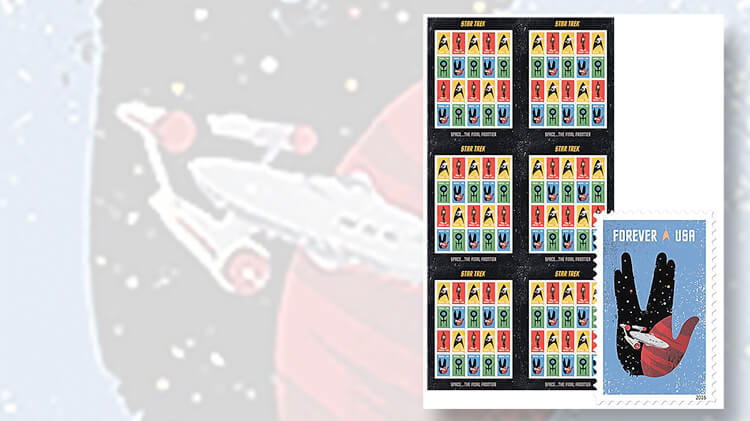 The United States Postal Service printed 5,000 press sheets of the 2016 Star Trek issue. Most recent press sheets were printed in quantities ranging from 1,000 to 1,500.

The United States Postal Service has revealed the quantities of uncut press sheets made available for sale to collectors for most of its 2016 issues, and for sheets offered at the beginning of 2017.

The information was sent to Linn’s Stamp News following six months of inquiries and the filing of a Freedom of Information Act request.

The quantities were provided by Teri Basinger, USPS manager of stamp production.

The figures reveal that most of the press sheets offered for sale by the Postal Service between August 2016 and early January 2017 were printed in quantities of 1,000.

Press sheet quantity figures were provided for 10 issues from 2016, and the first two issues of 2017. They are as follows:

The quantity for the 2016 Kwanzaa press sheet placed on sale Oct. 1 was not included in the USPS response. It was likely omitted unintentionally, and Linn’s is seeking to learn that figure as well.

The quantities for these press sheets are listed in a table on this page.

The numbers of press sheets made available to collectors were regularly published in the USPS Postal Bulletin until the issuance of the Pets stamps on Aug. 2.

From that point forward, when the Postal Service announced that a new press sheet was available, it did not reveal how many sheets were being issued.

The quantities revealed by Linn’s Freedom of Information Act request do not vary significantly from the quantities issued before the Postal Service began withholding the numbers from publication.

The heavily publicized commemorative stamps issued during World Stamp Show-NY 2016 in late May and early June were mostly offered in press sheet quantities of 3,000.

Despite that smaller available quantity, the Henry James press sheet remains available for purchase from Stamp Fulfillment Services more than six months later. The 120-stamp press sheet was priced at $106.80 prior to the scheduled Jan. 22 postage rate increase.

Several other press sheets for forever stamps from earlier in 2016 were issued in quantities of 1,000.

The Postal Service produces the press sheets, which contain multiple unseparated panes of stamps, for selected issues. They are made available for collectors to purchase through USPS Stamp Fulfillment Services.

The uncut press sheet without die cuts for the Year of the Monkey forever stamp issued Feb. 5, 2016, was the most recent of this kind issued by the USPS.

Postal Service officials told Linn’s Stamp News last year that the program of issuing press sheets without die cuts was under review, and that a decision of whether or not to resume the program could be expected at the end of 2016.

To date, no follow-up announcement has been made about the imperforate press sheet issues.