U.S. Seashells stamps: When and where they will be issued 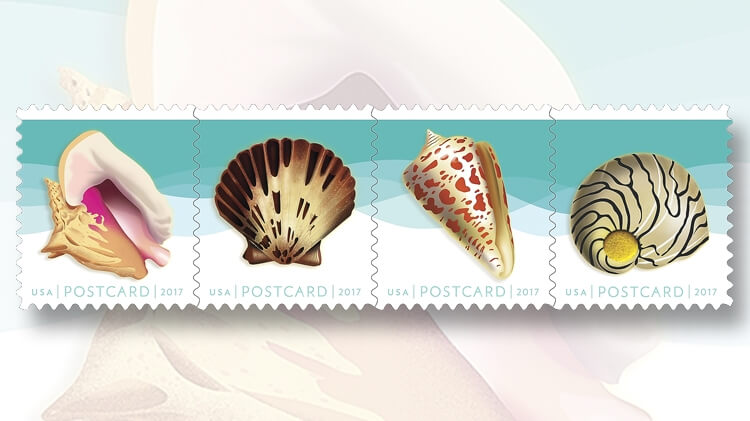 The nondenominated (34¢) stamps are each inscribed with the word “Postcard” and will fulfill the postcard rate regardless of future rate increases, much like a forever stamp is always valid for the current 1-ounce letter rate.

The Sandical Expo stamp show and exhibition is taking place Jan. 27-29 at the Al Bahr Shrine Center, 5440 Kearny Mesa Road in San Diego, but there has been no announcement from either the stamp show or the Postal Service that a ceremony will take place when the stamps are issued.

Both varieties of the Seashells stamps are offset-printed by Ashton Potter USA Ltd., of Williamsville, N.Y.

The shells depicted are all native to North American waters. The designs show the queen conch (also known as the pink conch), the Pacific calico scallop, the alphabet cone, and the zebra nerite, as rendered by artist Sergio Baradat, art director for the United Nations Postal Administration.

“The highly stylized stamp art expresses a lighthearted, artistic view of shells,” the U.S. Postal Service said in its Stamp Announcement 17-04. “The horizontal swaths of white and blue in the background suggest waves washing the shells onto a beach.”

The Seashells stamps are the third assignment Baradat has completed for the U.S. Postal Service. His first published stamp illustration was the 37¢ Mambo stamp issued in 2005 (Scott 3942) as part of the four-stamp Let’s Dance set.

Baradat, who earned his Bachelor of Fine Arts degree from Parsons School of Design in New York, told Linn’s that he researched the various species that are depicted on the stamps with reference books and photographs.

To create the designs, he began with sketches using pencil and paper, and noted that he prefers to do most of the artwork by hand.

“It’s fully designed and executed, everything is done in pencil,” Baradat said. “Then I scan it in, and I build everything digitally.” He added that he does numerous sketches and tracings, refining the art with each step. Color is added on the computer.

Baradat said that his work on stamp designs stems in part from his enjoyment of stamp collecting as a youngster.

The new set is the second to be issued with four designs and bearing the nondenominated postcard-rate designation. The first is the Coastal Birds set of four, issued June 1, 2015 (Scott 4991-4998).

The Coastal Birds set, which is still on sale, was also issued in panes of 20 and coils of 100, and presumably will be replaced eventually by the new Seashells issue.

Technical details and first-day cancel ordering information for the new Seashells postcard-rate stamps can be found below.

Standard ordering instructions apply. Collectors requesting first-day cancels are encouraged to purchase their own stamps and affix them to envelopes. Envelopes must be franked with at least 47¢ postage. The first-day cover envelopes should be addressed for return (a removable label may be used), and mailed in a larger envelope addressed to FDOI Seashells, Stamp Fulfillment Services, Cancellation Services, 8300 NE Underground Drive, Suite 300, Kansas City, MO 64144-9900.

Requests for first-day cancels must be postmarked by March 28.