Meet the designer of the 1960 Christmas seals 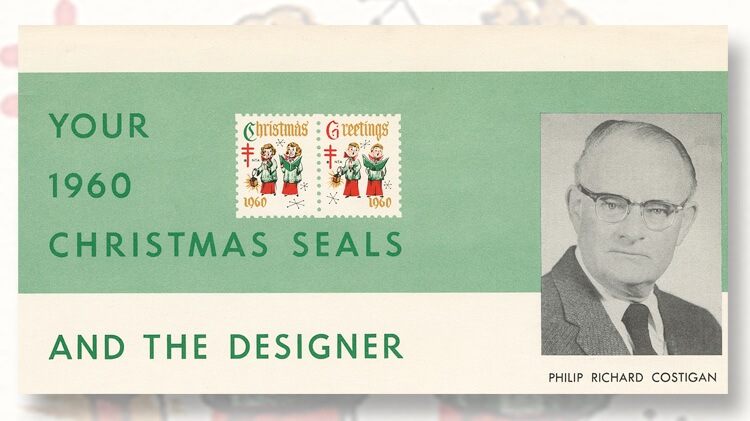 On the back of the 1960 Christmas seals flyer is a short biography of the designer Philip Richard Costigan, whose picture is shown at upper left. 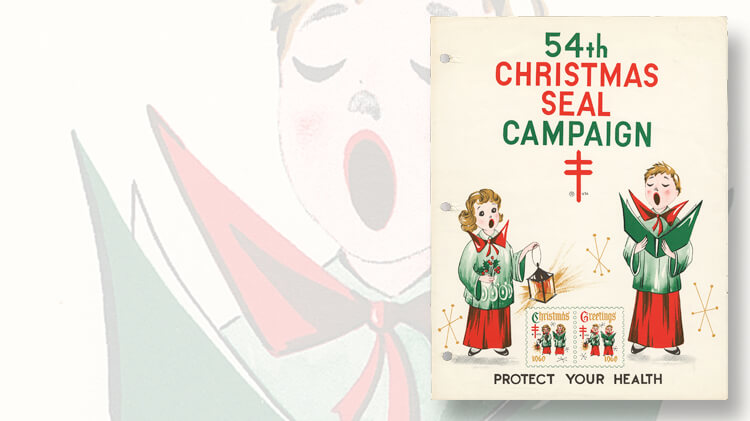 One method of publicizing the 1960 Christmas seals was this flyer featuring the designs. The front is shown here. 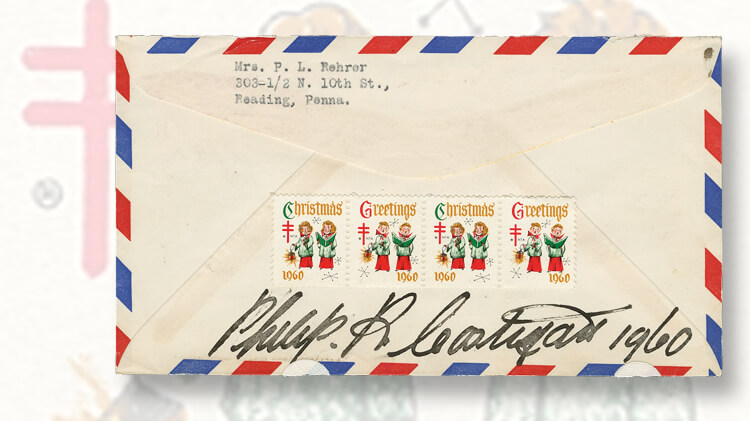 A strip of the 1960 National Tuberculosis Association Christmas seals adorns the back of this cover, together with the autograph of the seals’ designer, Philip R. Costigan.
Previous
Next

Christmas seal designers don’t get the glory that is accorded postage stamp designers, but their efforts are no less worthy of praise. Indeed their art enters more American homes than many postage stamps.

Information about these designers is scarce, so I was pleasantly surprised to find a flyer that presents information about Philip R. Costigan, the designer of the 1960 Christmas seals (Scott WX204-WX207).

Featuring choir boys and girls decked out for the holidays, these 1960s seals are among my favorites of the annual issues that began in 1907 for the purpose of raising money to combat tuberculosis and later, all lung diseases.

The 1960 seals are shown on the back of the cover shown nearby. This cover also bears Costigan’s autograph.

The flyer obtained at the same time advertises the 54th Christmas seal campaign. On the reverse is a photo of Costigan, and his biography, from which the following is excerpted:

“Philip Richard Costigan, whose fertile imagination conjured up the youthful choristers, was born in the little village of Acock’s Green, near Birmingham, in England. He received his secondary and undergraduate education in England, majoring in fine arts at King Edward’s College.

“He has designed crystal for Sweden, and textiles, wallpaper, posters and silverware for England. He now has his own studio in Lenhartsville, Pennsylvania, where he does free-lance designing for the decorating field. His designs in fine china have been exhibited in both European and American museums.”

The biography on the flyer concludes: “Mr. Costigan has a highly personal interest in the fight against tuberculosis. His uncle, an English artist, retired and came to this country to live with Mr. Costigan. Later on he contracted TB and died of it here. Our 1960 Christmas seal artist has maintained his interest and, in fact, first thought of doing a Seal design because of his connection with the TB nurses at the chest clinic in Reading, Pennsylvania.”

The seals were popular with the public, and despite an economic downturn that lasted from April 1960 to February 1961, the seals realized $26.26 million dollars, about half a million less than the 1959 seals.

Although it has not been unusual for an artist to design seals in more than one year, the 1960 seals were the only ones Costigan designed, but he certainly made them memorable.

Strange places the U.S. Christmas seal has been spotted