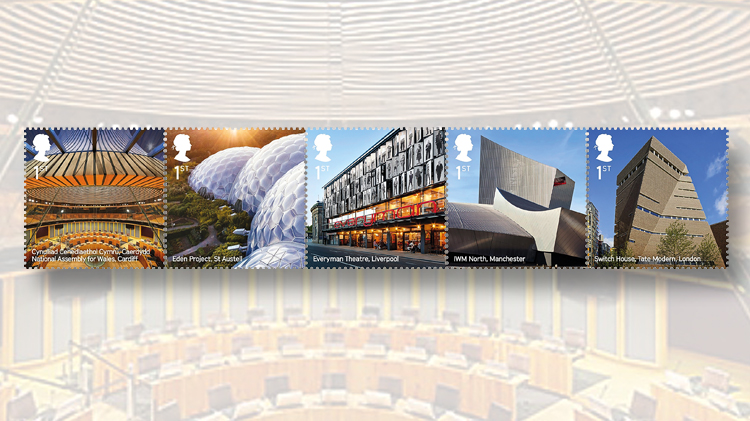 The second strip of five nondenominated first-class stamps in the Landmarks Buildings set pictures the National Assembly for Wales, the Eden Project in St. Austell, the Everyman Theater in Liverpool, IWM (Imperial War Museums) North in Manchester, and the 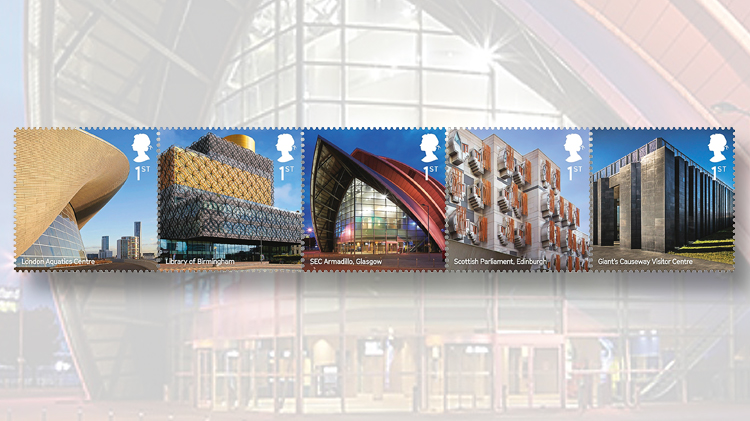 Great Britain’s July 23 Landmarks Buildings set includes two strips of five se-tenant stamps each. One strip shows the London Aquatic Center, the Library of Birmingham, the SEC Armadillo in Glasgow, the Scottish Parliament, and the Giant’s Causeway Visito
Previous
Next

In announcing the stamps, Royal Mail said that they celebrate excellence in contemporary architecture and engineering in the United Kingdom and “the renaissance in architecture of the past two decades in Britain.”

The Landmark Buildings stamps are se-tenant (side-by-side) in two strips of five. All the stamps are nondenominated with the inscription “1st,” indicating that they pay the first-class domestic letter rate, currently 65 pence.

One strip of five pictures the London Aquatics Center, the Library of Birmingham, the SEC (Scottish Exhibition Centre) Armadillo in Glasgow, the Scottish Parliament in Edinburgh, and the Giant’s Causeway Visitor Center in Northern Ireland.

Shown on the other strip are the National Assembly for Wales in Cardiff, the Eden Project in St. Austell, Liverpool’s Everyman Theater, IWM (Imperial War Museums) North in Manchester, and the Tate Modern’s Switch House in London.

Zaha Hadid Architects designed the London Aquatics Center, one of the main venues of the 2012 London Olympics.

The Hadid firm said that the concept for the design was “inspired by the fluid geometry of water in motion, creating spaces and a surrounding environment in sympathy with the river landscape of the Olympic Park.”

After the Olympics, the center was transformed into a public facility, reopening in March 2014.

Mecanoo, an architectural firm based in the Netherlands, designed the Library of Birmingham. Francine Houben, one of the founders of Mecanoo, called the library a “people’s palace,” adding that it serves as a center “for learning, information and culture that unites people of all ages and backgrounds.”

At approximately 350,000 square feet, it is the largest public library in the United Kingdom. Sitting at the top of its 10 levels is a rotunda that houses the Shakespeare Memorial Room.

The oldest building in the stamp set and the only one that was completed in the last century (1997) is Glasgow’s SEC Armadillo. Foster and Partners, the British architectural firm that designed this conference center and concert hall, was inspired by the city’s shipbuilding heritage, and the building’s unusual shape is based on interlocking ship hulls.

The Spanish firm Enric Miralles, Benedetta Tagliabue (EMBT) and the Scottish firm RMJM partnered to design the Scottish Parliament. Miralles, who died in 2000 before the project was completed, wanted the building to “reflect the land, which it represents.”

EMBT describes this concept: “Unlike the [Holyrood] palace, which dominates the landscape, the new Scottish Parliament drops literally into the hillside terrain, the lowest part of Arthur’s Seat, and appears to sprout from the living stone.”

Heneghan Peng used a similar concept of blending into the landscape in its design for the Giant’s Causeway Visitor Center in Antrim, Northern Ireland.

In reporting that the visitor’s center had been awarded the Royal Institute of British Architects’ Stirling prize for excellence in architecture, Lucy Townsend of BBC News wrote: “From one side it is basalt columns and shiny glass. From the other it is a grassy bank, barely seen at all. The Giant’s Causeway Visitor Centre is an attempt to balance buildings with the environment.

“It is meant to look like it has been pulled up from the earth. The basalt columns rise into the air, echoing the famous stones of the Causeway.”

Founded by Shih-Fu Peng and Roisin Heneghan in New York in 1999, the firm Heneghan Peng now is based in Dublin, Ireland, and Berlin, Germany.

Richard Rogers Partnership, now known as Rogers Stirk Harbour and Partners, created the design for the National Assembly for Wales to reflect the “democratic values of openness and participation.”

While all of the other stamps depict exterior views, the stamp for the assembly, or Senee, shows an interior scene of the Siambr, the circular debating chamber.

Tim Smit’s vision for Eden Project, an ecological park, was realized in an old clay pit in Cornwall through the geodesic domes designed by Grimshaw Architects. One of these domes contains what has been hailed as the “world’s largest rainforest in captivity.”

Architect Nicholas Grimshaw was influenced both by the work of geodesic dome pioneer R. Buckminster Fuller and by the ability of soap bubbles to “adapt to any surface they settle on.”

Eden Project said, “Basing the ‘lean-to’ Biome structures on soap bubbles was a perfect way to build on the uneven and shifting sands of the pit.”

Liverpool’s original Everyman’s Theatre opened in 1964 in a building that had previously served as chapel, concert hall, and a cinema.

Approximately 25,000 bricks from the original structure were used in constructing the auditorium for the new theater. It reopened in 2014.

The architecture firm Haworth Thompkins received the Stirling prize for the best building of the year for this redevelopment project.

Studio Libeskind said of the project: “The design concept is a globe shattered into fragments and then reassembled. The interlocking of three of these fragments — representing earth, air, and water — comprise the building’s form. The Earth Shard forms the museum space, signifying the open, earthly realm of conflict and war; the Air Shard serves as a dramatic entry into the museum, with its projected images, observatories and education spaces; and the Water Shard forms the platform for viewing the canal, complete with a restaurant, cafe, deck and performance space.”

After six years of construction, the Tate Modern’s Switch House opened in 2016, adding 60 percent more display space to the modern art museum. Earlier this year, the name of this 10-story extension to Tate Modern was changed to the Blavatik Building.

The Swiss firm Herzog and de Meuron designed this building, and was also the architect for the original transformation of the Bankside Power Station into the Tate Modern.

The design and advertising agency GBH designed the stamps. International Security Printers printed them by offset. The stamps are square, 35 millimeters by 35mm, and are perforated gauge 14.5 by 14.5.

Royal Mail’s other products for the Landmark Buildings set include first-day covers, 10 postcards reproducing the designs of the stamps, and a presentation pack.

The pack, which is presented in the style of architectural plans, includes mint examples of the stamps and text by architectural critic and journalist Rowan Moore.