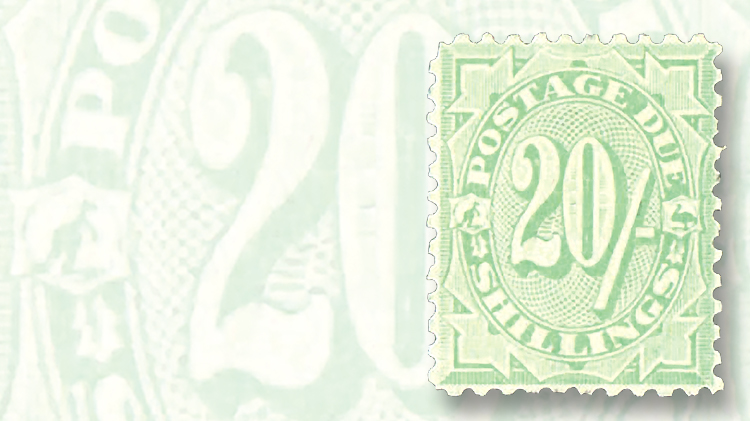 The Aug. 19-20 public auction No. 433 by Rasdale Stamps Co. will offer an unused example of Australia’s most elusive postage due stamp, the 1908 20-shilling emerald. 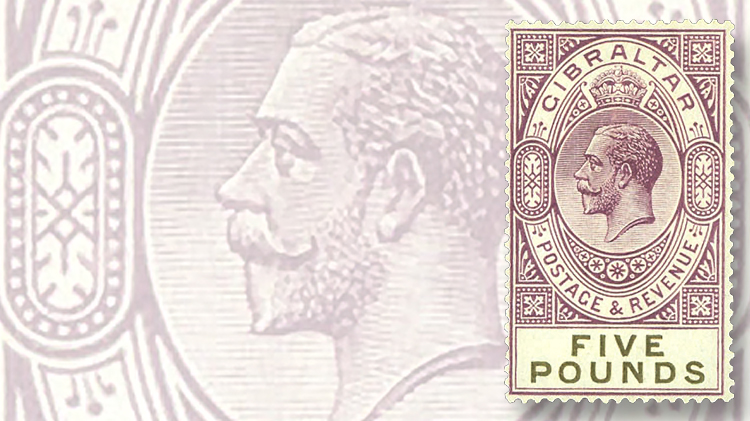 A never-hinged example of the 1925 £5 dull violet and black King George V stamp on chalk-surfaced paper is another British Commonwealth offering in the upcoming Rasdale sale.
Previous
Next

Rasdale Stamp Co. will conduct its public auction No. 433 Aug. 19-20 at its facility in the western suburbs of Chicago.

The second session on Sunday presents almost 200 lots of U.S. stamps, along with about 600 lots of worldwide issues.

The worldwide material includes Germany and area, Italy and area, the Netherlands, and much more.

There is also a strong representation of Great Britain and the British Commonwealth.

Many of these single stamps and sets are offered by Rasdale with minimum bids far below the established Scott catalog values.

One rarity from this group is the 1908 20-shilling emerald postage due stamp from Australia (Scott J38), offered unused with original gum.

The 2018 Scott Standard Postage Stamp Catalogue value of $29,000 for this single stamp is listed in italics, to indicate an item that can be a challenge to value accurately.

The perf. 11 20sh postage due stamp is a key item in the quest to assemble a comprehensive back-of-the-book collection of Australia.

This example is described by Rasdale as fine-very fine, and has been authenticated by the American Philatelic Expertizing Service.

On the other side of the world, the far smaller Commonwealth colony of Gibraltar began issuing stamps in 1886.

An elusive stamp in a collection of classic Gibraltar is the 1925 £5 dull violet and black King George V on chalk-surfaced paper (Scott 93), which Rasdale is offering unused and never-hinged, described as fine-very fine.

The United States stamps in the Sunday auction session include many classic and later issues, along with airmails (including unused Zeppelins in sets and singles) and a few other back-of-the-book items.

A 1917 pane of 30 1¢ green George Washington stamps from the A.E.F. booklet, position I, is offered never-hinged, with a 1988 Philatelic Foundation certificate identifying it as genuine.

Collectors in search of the 1926 Battle of White Plains 25-stamp souvenir sheet (Scott 630) will find six examples to choose from in this auction, all intact and never-hinged.

The Rasdale auction is presented here, with online bidding options available or through Stamp Auction Network.

Back-of-the-book items and much more at Feb. 20-21 Rasdale auction