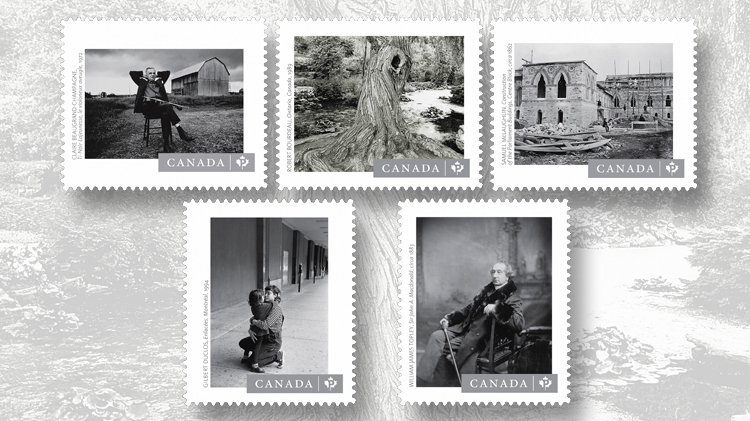 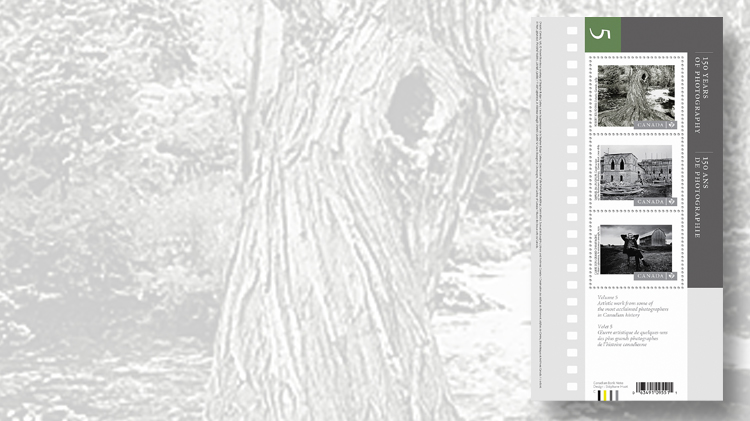 The Canadian Photography stamps are available as self-adhesives in booklets of 10, and with moisture-activated gum in souvenir sheets. This souvenir sheet contains the three stamps showing the photographs by Robert Bourdeau, Samuel McLaughlin and Claire B 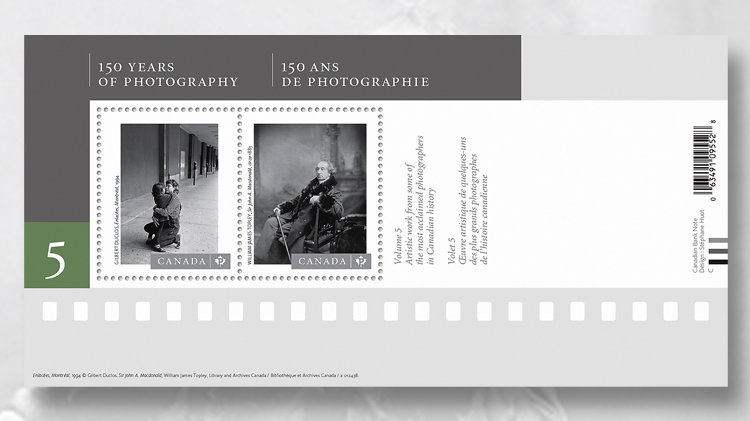 On July 4, Canada Post concluded its five-year series of commemorative stamps that showcased “the best Canadian photographers and photography of the past 150 years, as chosen by leading curators and gallery owners.”

Five new designs were issued as self-adhesive stamps in booklets  of 10 and with moisture-activated gum in two souvenir sheets (one with three of the new stamps, and the other with two).

The designs also were reconfigured into a set of international-rate postal cards, though Canada Post did not issue any stamps denominated to pay rates abroad as it had during 2013-16.

The oldest photograph of the five, Construction of the Parliament Buildings, Centre Block, was taken by Samuel McLaughlin, Canada’s first official photographer, circa 1862.

Canada’s Parliament Building has been frequently featured on Canadian stamps, beginning with a 3¢ stamp in 1927 (Scott 143).

Another early historic image is William James Topley’s circa 1883 portrait Sir John A. Macdonald. Macdonald, Canada’s first prime minister, would have then been 68 at the time.

Topley’s photograph obviously was the basis of the 1¢ orange Macdonald stamp that was the low denomination in the set that marked the 60th anniversary of Confederation in 1927 (Scott 141).

The photography of Robert Bourdeau is summarized with an adaptation of his 1989 gelatin silver print titled Ontario, Canada, showing the deeply textured bark and gnarled roots of a tree that has survived many decades along the bank of a narrow creek.

The most recent of the five photos was taken in 1994 by Gilbert Duclos of Montreal, who was described in the news release for the issue as “a letter carrier and truck driver for Canada Post in the 1970s and the man behind the image of Oscar Peterson that graced our first stamp featuring a living Canadian, in 2005” (Scott 2118).

Titled Enlacees, Montreal (enlacees translates to “Intertwined”), this photo captures a young mother and daughter in a face-to-face embrace, a warm moment on a cold field of urban concrete.

The image is from Duclos’ 1977-2007 Cities series. A webpage devoted to the artist, said that the theme of the series is “the human in the urban environment,” adding that “taken randomly from his encounters, the black and white photographs, all vertical, reflect his curiosity and sometimes his astonishment.”

Canadian Bank Note printed the stamps by offset lithography in six colors for the self-adhesive serpentine die-cut booklet of 10, of which 140,000 were printed.

A total of 100,000 of each of the three- and two-stamp perforated souvenir sheets with moisture-activated PVA gum were printed in five- and four-color lithography, respectively.

The three-stamp souvenir sheet features the photos by Bourdeau, McLaughlin, and Beaugrand-Champagne. The photos by Duclos and Topley are in the two-stamp sheet.

Like the others in the Canadian Photography series, these stamps are 36 millimeters by 30mm, and the souvenir sheets measure 150mm by 75mm each.

Stephane Huot designed these and all the other stamps in the Canadian Photography series, which has honored 35 prominent photographers.