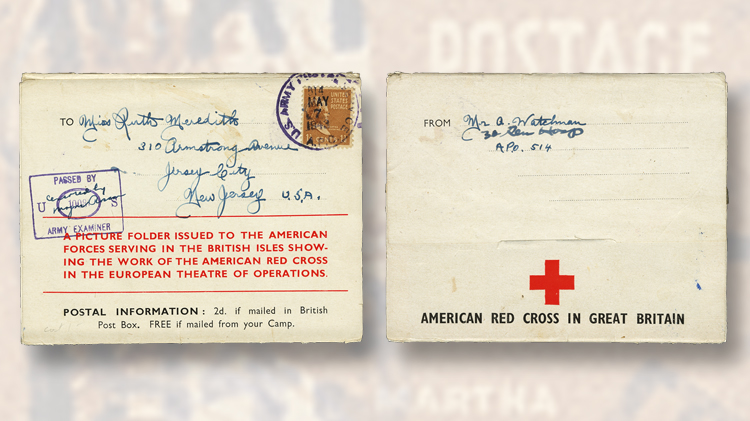 Sent from APO 514 at Mansfield, England, in 1943, this “picture folder” describes the many facets of American Red Cross work in support of the United States military in England. The folder is franked with a United States 1½¢ stamp. 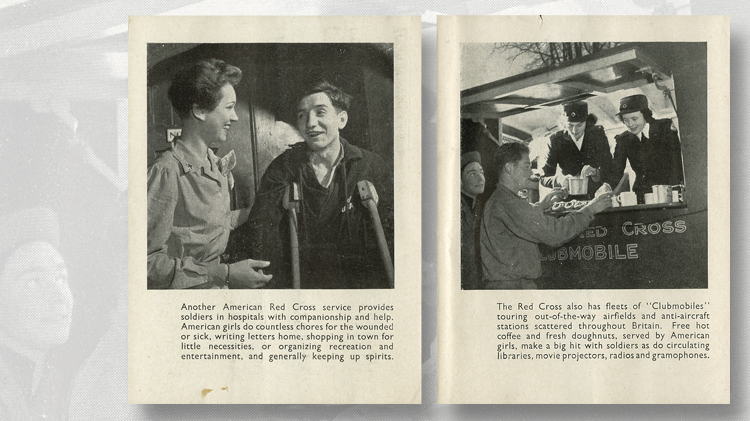 These two photo panels from the Red Cross picture folder portray methods by which the Red Cross worked to support United States military personnel who were assigned to England, or were sent there to recuperate from war wounds.
Previous
Next

The never-ending postal history surprises from American forces in wars are a constant source of amazement; and another has just landed on my desk.

Shown, front and back, it is a “picture folder issued to the American forces serving in the British Isles showing the work of the American Red Cross in the European Theatre of Operations.”

The source, per the reverse, is the American Red Cross in Great Britain. It was probably sent by a Red Cross worker assigned to a military hospital at APO 514 (Mansfield, England) on May 14, 1943. It bears a censor marking.

Inscribed at the bottom of the front of the folder is the following “postal information,” stating that it cost 2 pence to mail in a British postbox, and that it is free if mailed from your camp.

The fact that 1½¢ printed matter rate postage was paid means that the sender probably was not a serviceman.

Within the folder are 16 photographs depicting activities of or sponsored by the Red Cross.

With all of these photographs, this was not an inexpensive production.

I wonder how many folders were printed and distributed, and how many survive? Being sent by noncollectors to family members and friends, who also mostly likely weren’t collectors, would suggest that this is a fairly scarce item.