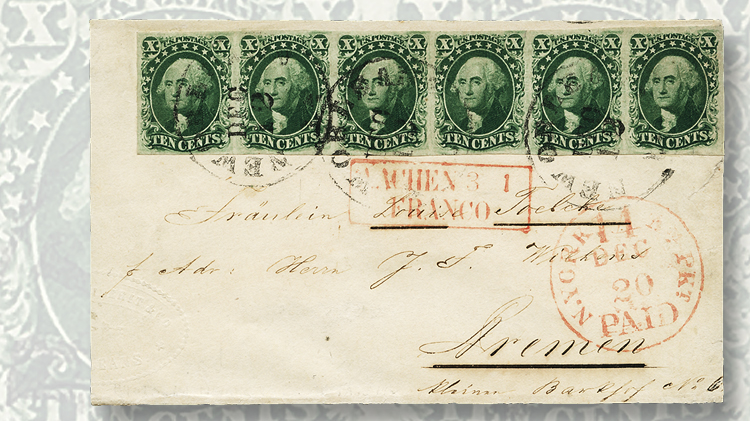 Among the postal history highlights in the Kelleher sale was this impressive 1855 cover with a wonderful strip of six of the Type III 10¢ Washington stamp of that year, which found a home for $12,000. 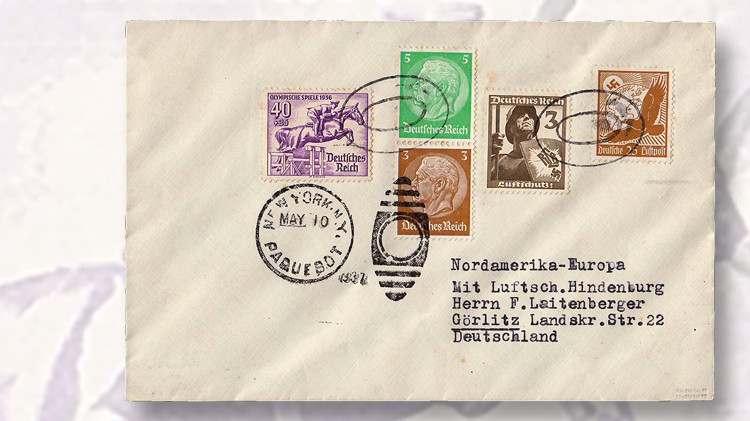 Not all mail on board the ill-fated Hindenburg flight was burned. Kelleher sold this cover, which was meant to go back to Germany, for $1,200 at its May auction. The United States postmarks on the Germany stamps were allowed because the cover was treated 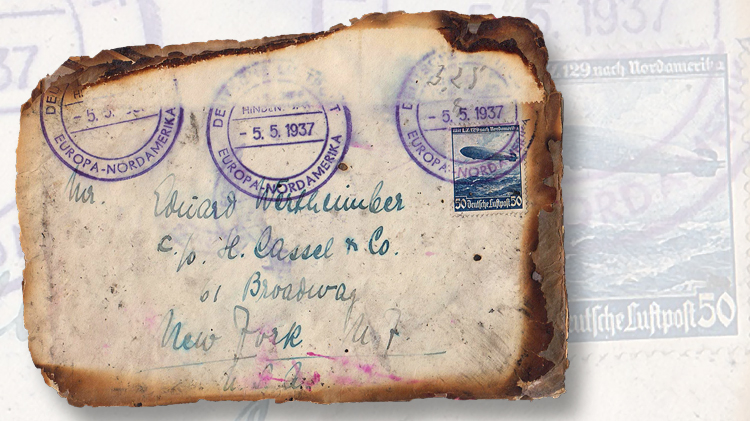 For avid collectors of wreck and crash mail, this Hindenburg cover is one of the ultimate trophies. With five missing stamps and singe marks all around, this example, postmarked on board the Hindenburg the day before its well-document May 6, 1937, crash, 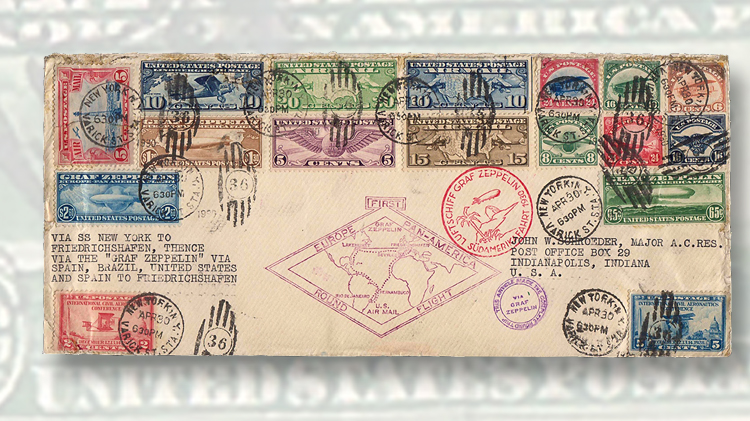 This 1930 round-the-world Graf Zeppelin airmail cover was part of a flight of zeppelin covers Kelleher served up during its two-day auction. Franked with one example of every airmail stamp issued by the United States to date, plus the two 1928 Aeronautics 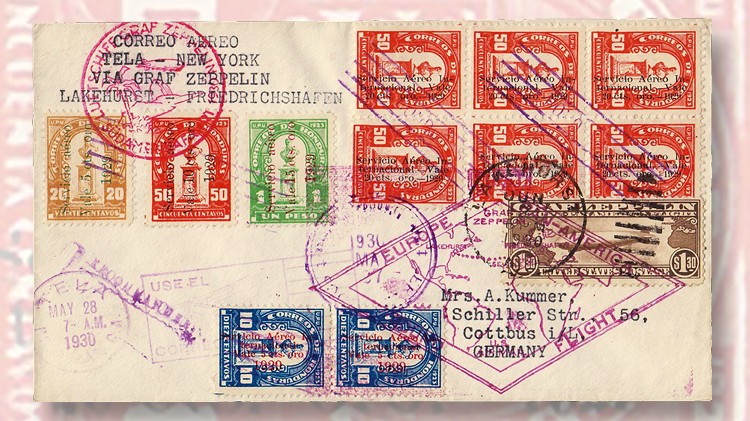 “One of only five such cards flown,” according to Kelleher, this 1930 Graf Zeppelin cover mailed from Tela, Honduras, attracted spirited bidding and sold for $10,800 during the firm’s May sale. 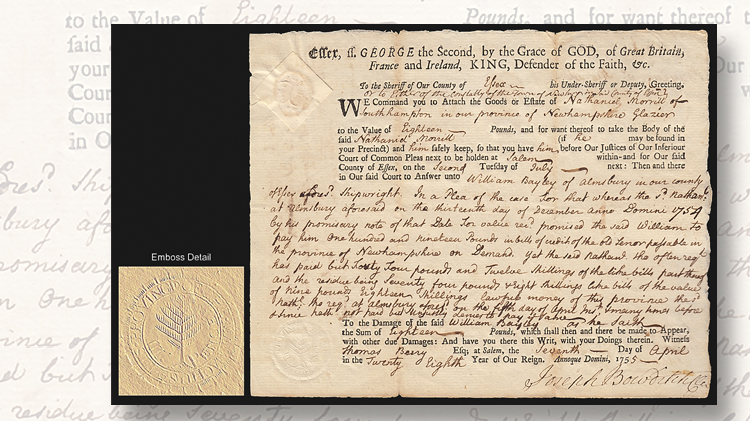 During its May 18-19 Flagship sale, the Daniel F. Kelleher firm offered this 1755 Newbury, Mass., arrest warrant documenting “the earliest use of any stamp of any kind issued within what is now the United States.” A detail of the embossed revenue stamp is
Previous
Next

As every philatelist knows, the world’s first adhesive postage stamp is the famous Penny Black, issued by Great Britain in 1840, with the first United States stamps arriving a few years later, in 1847.

Sir Rowland Hill, the inventor of the Penny Black, is properly regarded as a brilliant reformer for having devised and carried out comprehensive changes to the postal system.

However, his idea of using stamps to show prepayment of postage wasn’t exactly plucked from thin air.

Stamps as a means of documenting payment had been around for centuries, sometimes in a postal context, such as the Cavallini stamped letter sheets of Sardinia (Linn’s June 15 issue, page 28) or the “AQ” sheets of Venice, but more commonly for showing payment of duties, fees, and other forms of government revenue.

Stamps were typically struck by hand directly onto the taxed document, either in ink or by colorless embossing. Sometimes a little security embellishment, such as a strip of embedded metal, would be added as well.

It was a row over a tax stamp in the 1760s that started the process that led to the American Revolution. But that was not America’s first stamp, either.

The answer, it turns out, was lurking in a recent sale by the Daniel F. Kelleher firm of Danbury Conn., which offered another of its Flagship sales May 18-19.

Billed as “the earliest use of any stamp of any kind issued within what is now the United States,” it is a circular, embossed revenue stamp on an arrest warrant from the town of Newbury, in Essex County, Mass. The document, partially preprinted and filled in by hand, is dated April 7, 1755.

In the lower-left corner is the stamp, showing a pine tree, much like the colonial coinage of the period, surrounded by the words “Province of the Massachusetts” and “III. Pence”.

The stamp became mandatory for paying the duty on legal documents at the end of that month and remained in use for two years.

The “wonderfully preserved” warrant sold for $19,200, including the 20 percent buyer’s premium added by Kelleher to all lots.

Moving on to postal history, the sale included a splendid 1855 cover with a wonderful strip of six of the Type III 10¢ Washington stamp of that year (Scott 15).

At the time, the rate by American packet ship to Germany was 30¢, so the letter was paid for double weight.

A circular datestamp below the strip indicates that 14¢ of the total was due to Prussia for carriage of the letter via Belgium into Germany.

Kelleher called the strip an “impossible-to-find” multiple, with margins all around. The cover’s provenance includes the historic Caspary collection, as well as that of Louis Grunin.

A further part of the sale was made up of an impressive range of Zeppelin mail, including covers from the United States and around the world.

Before it went into regular commercial service between Germany and South America, the luxury dirigible Graf Zeppelin, also known by its code name LZ-127, made high-profile test flights to the Mediterranean, Asia, North America, and even the North Pole.

All of these flights carried mail, and many countries issued special postage stamps marking them. Zeppelin stamps typically had high face values and were issued in smaller than normal quantities, making them highly collectible.

Letters and cards intended for carriage on the Graf Zeppelin would be mailed from their country of origin to the place of embarkation, where additional postage would sometimes be applied for the flight.

After the flight ended, the mail would continue to its ultimate destination, sometimes back in the country of origin.

A spectacular cover franked with one example of every airmail stamp issued by the United States to date was carried on a round-trip Pan-America flight made by the Graf Zeppelin in May 1930.

It includes the 1918 Curtiss Jenny airmails (Scott C1-C3) all the way through to the Graf Zeppelin set of three (C13-C15) issued just days before the trip, as well as a 1928 commemorative pair marking the civil aeronautics conference in Washington, D.C. (649-650).

The cover left New York by ship April 30 for Germany, where it was put aboard the Graf Zeppelin at its home base in Friedrichshafen for the flight via Spain, Brazil, the United States, and back to Europe.

A distinctive violet, diamond-shaped cachet shows a map of the whole trip. A German pictorial postmark in red marks the flight, while a small, circular handstamp in violet certifies the cover made the entire journey. The cover sold for $960.

Although the zeppelins carried large quantities of mail, some combinations of more obscure origins and destinations are scarce and highly sought after.

One such example in the Kelleher sale was a Graf Zeppelin cover mailed May 27, 1930, from the small town of Tela, on the northern coast of Honduras, with 1.60 pesos in Honduran provisional airmail stamps (Scott C15-C19) and sent by air the next day to New York.

At Lakehurst, N.J., the card was additionally franked with a U.S. $1.30 Zeppelin stamp (Scott C14) on June 2 and given the distinctive violet, diamond-shaped flight cachet for the final leg of the Europe-Pan America flight home to Germany.

Noting that it is “one of only five such cards flown,” Kelleher knocked it down for $10,800.

While the Graf Zeppelin’s many successful flights have made her familiar to philatelists, it was her sister ship, the Hindenburg (LZ-129), who would go down as the more famous in popular lore, thanks to her tragic end.

While docking at Lakehurst May 6, 1937, she exploded and crashed, killing 36 people. This accident marked the end of commercial, passenger-carrying airships.

The fire burned out very quickly and some of the mail on board — about 165 covers — was salvaged. For collectors of wreck and crash mail, a Hindenburg cover is one of the ultimate trophies.

The Kelleher sale offered a couple, including one addressed to New York City from a sender in Germany. The edges of the envelope are badly singed, and five of the six stamps have fallen off, leaving only a Germany 50-pfennig Hindenburg stamp (Scott C57).

The letter was canceled on board the Hindenburg the day before the crash. Called “arguably one of the finest of all Hindenburg crash covers” by Kelleher, it sold for $7,500.

Fortunately, not all mail aboard the Hindenburg was burned. Some 175 pieces of mail that were meant to go back to Germany on the return flight had been placed in a metal container, as yet uncanceled at the time of the crash. These were recovered in perfect condition, but they posed a quandary for the U.S. Post Office Department. They could no longer be canceled aboard the destroyed airship, but they were franked with German stamps, making their cancellation by the United States problematic.

The answer was to treat them as mail posted at sea, which may be postmarked at a ship’s next port of entry even if the stamps are from the country of origin.

The Kelleher sale included one such cover, franked with five Germany stamps and addressed to Gorlitz in Germany. All of the stamps are obliterated with mute ovals, and one is additionally tied by a neat “New York Paquebot” cancel dated May 10, 1937. It fetched $1,200.