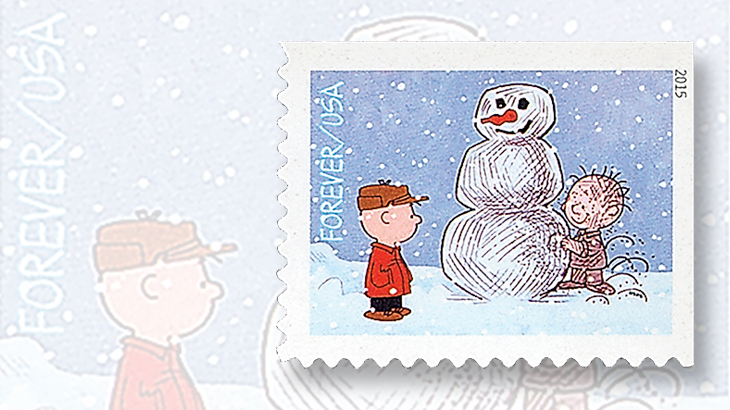 The U.S. Stamp Notes cartoon caption contest for August is the 2015 Christmas stamp showing Charlie Brown, Pigpen, and a snowman. Put yourself under Charlie Brown’s hat, and tell me what you think he might be saying about the weather, Christmas, stamp col

As summer temperatures rise, the idea of snow seems more attractive than when I have to actually shovel it. Still, I wait with anticipation for January and February each year, when we are most likely to get snow in northern Virginia — if we get snow at all.

There have been years when global warming looked to be a proximate threat, and all the snow went north. Happily, the last couple of years have included a couple of decent storms.

In the no-snow years I would have given anything to be Charlie Brown and Pigpen standing in fresh snow, as seen on the cartoon caption contest stamp for August (Scott 5022).

This stamp is one of 10 different Charlie Brown Christmas stamps issued in booklet format for Christmas 2015.

Your challenge is to put yourself under Charlie Brown’s trademark hat, and tell me what he might be saying or thinking about the weather, the snowman, stamp collecting, cartoon art, politics, or anything else that strikes your fancy.

To be considered for the prizes, entries must reach me no later than Aug. 25.

Meet the designer of the 1960 Christmas seals