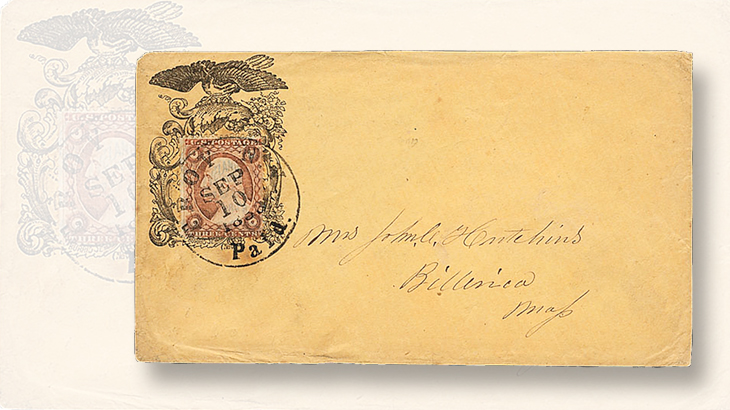 This Sept. 10, 1858, Troy, N.Y., cover was labeled “Northern Protest” by the dealer who sold it. Why is not immediately obvious, but a Linn’s reader might have solved the puzzle.

The cover is franked with a 3¢ Washington stamp (Scott 26) and addressed to Billerica, Mass.

I thought the “Northern Protest” could have something to do with the ornate artwork surrounding the stamp, but nothing has come to light to support that.

The most promising explanation comes from Linn’s reader Rich Howell, who suggested that it might be related to the “Suffrage Convention of the Colored Citizens of New York” held in Troy, N.Y., on Sept. 14, 1858.

Howell provided a transcript of the convention report that includes the following section that certainly fits my definition of a protest:

“Resolved, that the Dred Scott decision is a foul and infamous lie, which neither black men nor white men are bound to respect. It is a bold, impudent and atrocious attempt to extend and perpetuate the blasting curse of human bondage. We look upon it as an utterance of individual political opinions in striking contrast with the sacred guarantees for liberty with which the Constitution abounds. …”

The transcript of the convention report is from the website of the Colored Conventions Project. The report originally was published in the Liberator of Oct. 1,1858.

If the letter once enclosed in the 1858 cover were still available, it might help to make the meaning of the “Northern Protest” labeling clearer, but it isn’t.

So we are left with an interesting theory but no proof.

Thanks to Linn’s readers John Coupal, Rudy deMordaigle, and Chip Gliedman who also wrote with their thoughts on the cover.