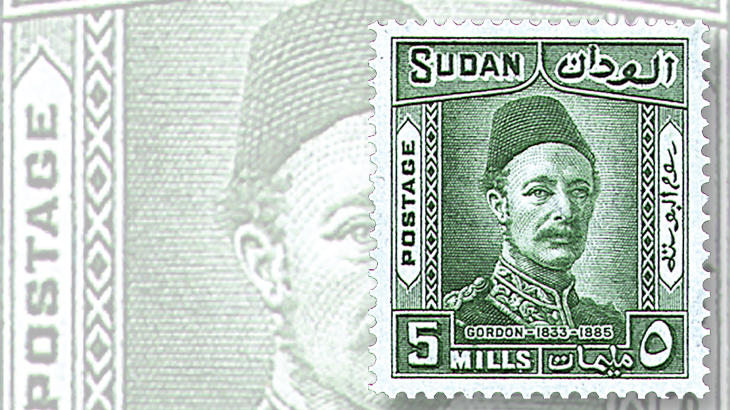 The 1935 Sudan 50th Anniversary of the Death of Gen. Charles George Gordon set of nine stamps (Scott 51-59) has long-lasting appeal across a broad range of collectors.

In the April 5, 2010, Stamp Market Tips, we tipped the Sudan set of nine 50th Anniversary of the Death of Gen. Charles George “Chinese” Gordon (Scott 51-59) stamps, issued Jan. 1, 1935. This set has remained in steady demand over the years since that time, proving its long-term appeal.

General Gordon was an eccentric but brilliant military commander. Gordon served in the British Army in the Crimean War, but he won lasting fame in brilliantly commanding the Ever Victorious Army of the Emperor of China, which earned him the sobriquet “Chinese” Gordon.

After China, in 1873 Gordon entered the service of the Khedive of Egypt as the governor-general of Sudan. In Sudan, he was a tireless foe of the slave trade, virtually eradicating it during his tenure. Exhausted by his efforts, he resigned in 1880 and returned to Great Britain. After his departure, Muhammad Ahmad, an Islamic holy man, proclaimed himself to be The Mahdi (an apocalyptic ruler at the end of time) and led the tribes of Sudan in revolt against the Egyptian government.

Gordon was sent to Sudan to evacuate the Europeans from Khartoum, but he refused to leave the Egyptians and loyal Sudanese to their fates. Staying on to defend Khartoum, he conducted a brilliant defense but was eventually overwhelmed by superior numbers. A British relief column arrived two days after the city fell. The story was dramatized in the 1966 United Artists’ film Khartoum, starring Charlton Heston as Gordon and Laurence Olivier as The Mahdi.

The 2017 Scott Classic Specialized Catalogue of Stamps and Covers 1840-1940 values the set of nine stamps in unused hinged condition at $181.25 and in mint never-hinged condition at $325. This exciting historical set is popular across a broad range of collectors, and demand has been steady.