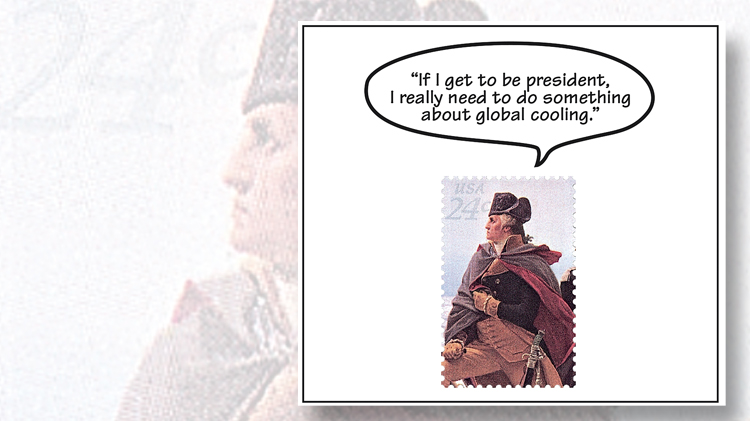 The co-winners of the nonphilatelic part of the June cartoon caption contest are T. Ryan of San Francisco, Calif., and Joe Timko of Vicksburg, Mich. The contest featured the 24¢ stamp picturing Washington’s crossing of the Delaware from a 1976 Bicentennial souvenir sheet showing the famous painting, and both entries had Washington in the problem-solving mode. The next cartoon caption contest will be announced in Linn’s Aug. 14 issue.

Mention presidents these days, and one of the first themes to be raised will be tweeting.

What if previous presidents, even those well before the time of social media, used Twitter as a method of communication?

That question seemed to weigh on the minds of several entrants in the June cartoon caption contest.

The contest stamp for June featured the stoic figure of George Washington leading the Continental Army, in, shall we say, uninviting weather, across the Delaware River to surprise British forces at Trenton, N.J.

This 24¢ stamp is the second in a 1976 souvenir sheet reproducing the painting Washington Crossing the Delaware by Emmanuel Leutze.

David D’Hondt of Sun City, Calif., represents the first group of entries with, “If anyone tweeted too soon, we’ll be trumped!”

Washington’s wife Martha was mentioned in many of the entries. Given the headwinds George is facing in the picture, this line from Steve Kotler of San Francisco, Calif., seems especially appropriate: “I told Martha to go easy on the starch!”

Another group of entries dealt with the location of post offices, first-day ceremonies, and the availability of the latest commemorative stamps.

From this group, Kevin Maloy of Tracy, Calif., weighed in with, “Hang on guys! There’s one more post office across the river that still has the Jenny Invert sheets on sale!”

There is a tie for first place in the nonphilatelic line part of the contest. The topical line reflecting today’s concerns was submitted by both Joe Timko of Vicksburg, Mich., and T. Ryan of San Francisco, Calif.

On the philatelic side of the contest, Kenny Moore of Rocklin, Calif., won the prize with, “We’re overloaded. We’ll have to go back and add more postage!”

Here are the best of the runners-up

“Quick men … gather round. This is a selfie to remember!” by Robert Fabian of Needville, Texas.

“Maybe we could borrow skates from someone … ” from John Watson, sent by email.

“Steady men, full speed ahead, the buffet and fireworks start in 15 minutes!”  by Tim Collins of Antioch, Ill.

“I love my new hat and cape from Ivanka’s Presidential Collection of men’s clothing,” from Laura and Tom Tomaszek of Cedar Rapids, Iowa.

“Hmmm — Did I blow the candles out before we left?” by Richard Parker of Houston, Texas.

The next cartoon caption contest will be announced in the Aug. 14 Linn’s.