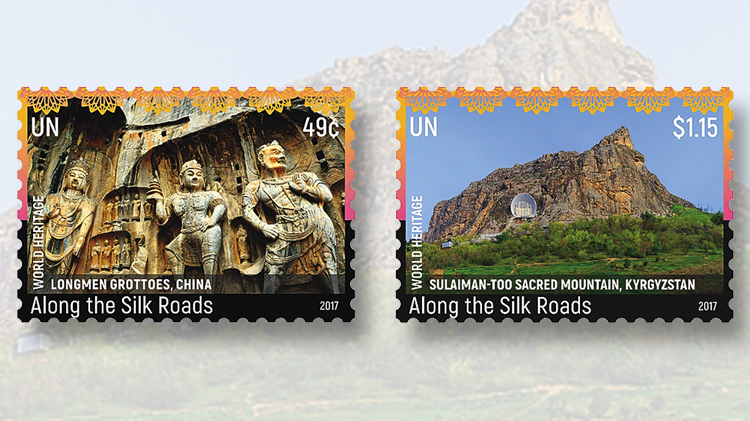 The United Nations Postal Administration issued six World Heritage stamps Aug. 3 with the theme “Along the Silk Roads.” The two stamps for use from the UNPA post office at U.N. headquarters in New York City picture the Longmen Grottoes in China and Kyrgyz 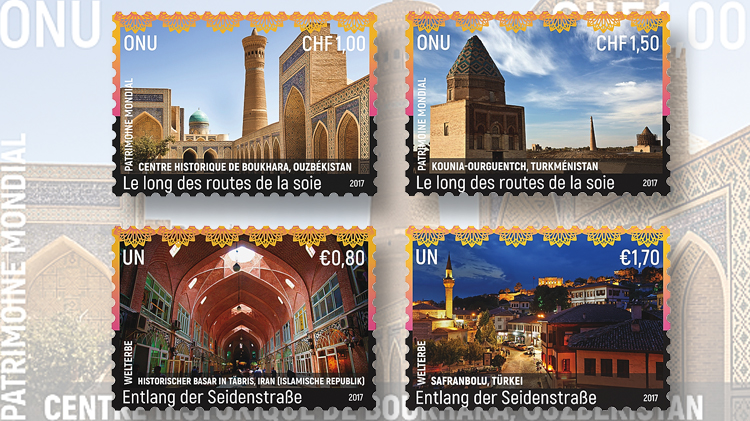 Cities and towns located along the Silk Roads in Uzbekistan, Turkmenistan, the Islamic Republic of Iran, and Turkey are featured on the new United Nations Postal Administration’s World Heritage stamps for use from U.N. post offices in Geneva, Switzerland,
Previous
Next

The latest addition to the United Nations Postal Administration’s World Heritage series, to be issued Aug. 3, is called Along the Silk Roads.

This set includes six stamps and three prestige booklets (with text and illustrations as well as stamps) featuring a few of the sites found along these trade and communication routes that linked the “ancient societies of Asia, the Subcontinent, Central Asia, Western Asia and the Near East, and contributed to the development of many of the world’s great civilizations.”

A section of the Silk Roads was inscribed as a cultural heritage site on UNESCO’s World Heritage list in 2014 under the title “Silk Roads: the Routes Network of Chang’an-Tianshan Corridor.” The listing features 33 locations in China (22), Kazakhstan (eight), and Kyrgyzstan (three).

UNESCO also said, “As well as conduits for goods and people, the routes allowed the exceptional flow of ideas, beliefs and technological innovations such as those related to architecture and town planning that shaped the urban spaces and peoples’ lives in many fundamental ways.”

All of the locations pictured on the stamps have separate inscriptions on the World Heritage list.

For example, the two stamps for use from the UNPA post office at U.N. headquarters in New York City picture the Longmen Grottoes in China and the Sulaiman-Too sacred mountain in Kyrgyzstan, inscribed on the list in 2000 and 2009, respectively.

The Longmen Grottoes are featured on the 49¢ stamp. The brief description on the UNESCO World Heritage website, http://whc.unesco.org, reads: “The grottoes and niches of Longmen contain the largest and most impressive collection of Chinese art of the late Northern Wei and Tang Dynasties (316-907). These works, entirely devoted to the Buddhist religion, represent the high point of Chinese stone carving.”

The $1.15 stamp shows Sulaiman-Too, which has been translated as Solomon’s mountain, rock and throne.

In his travel blog and online guide the Complete Pilgrim (http://thecompletepilgrim.com), Howard Kramer wrote, “Suleiman Mountain has been venerated as a sacred place since ancient times. Named in honor of the Qu’ranic Prophet Suleiman, who may or may not be the same person as King Solomon of the Hebrew Bible, the mountain has been visited by religious pilgrims since well before the advent of Islam.  The mountain itself is an absolutely amazing rock formation which looms over the city of Osh and the surrounding area. A number of related sites are located on or near its peak, including the Shrine of Suleiman, a 16th century mosque and a museum. … “

The other four stamps — two each for the UNPA post offices at the Palais des Nations in Geneva, Switzerland, and the Vienna International Center in Vienna, Austria —  depict towns cities along the Silk Roads in other countries.

The UNPA/Geneva 1-franc stamp shows the historic center of Bukhara, Uzbekistan, which was added to the World Heritage list in 1993.

More than 2,000 years old, Bukhara is considered the “most complete example of a medieval city in Central Asia,” according to UNESCO.

Among the city’s monuments are the Samanid mausoleum, built in the 10th century, and numerous 17th-century madrasas.

Kunya-Urgench in Turkmenistan was inscribed on the World Heritage list in 2005. The 1.50fr stamp features the 12th-century mausoleum of Il-Arslan in the foreground and an almost 200-foot tale minaret in the background.

UNESCO said that the town’s monuments “testify to outstanding achievements in architecture and craftsmanship whose influence reached Iran and Afghanistan, and later the architecture of the Mogul Empire of 16th-century India.”

The UNPA/Vienna stamps show sites now located in the Islamic Republic of Iran and Turkey.

Pictured on the 80¢ stamp is the historic bazaar complex in Tabriz, Iran, which was added to the World Heritage list in 2000. It is considered to be the largest covered bazaar in the world.

UNESCO said: “Tabriz Historic Bazaar bears witness to one of the most complete socio-cultural and commercial complexes among bazaars. It has developed over the centuries into an exceptional physical, economic, social, political, and religious complex, in which specialized architectural structures, functions, professions, and people from different cultures are integrated in a unique living environment.”

The  €1.70 stamp shows a night view of Safranbolu. This town, located on the Black Sea region of Turkey, is named after the spice safron, which grows in the area.

Dating back to at least 3,000 B.C., Safranbolu developed into a trading center after the Turkish conquest in the 11th century and continued to serve as a caravan station for several centuries.

The press release from UNPA said: “During its apogee in the seventeenth century, Safranbolu’s architecture influenced urban development throughout much of the Ottoman Empire. It was inscribed on the World Heritage list in 1994.”

Sergio Baradat of the United Nations designed the Along the Silk Road stamps, using photographs from the stock photography company Alamy. Each stamp measures 50 millimeters by 30mm and is perforated gauge 14½ by 14¾.

The printing quantities of the prestige booklets are 10,500 of the booklet for UNPA/Vienna; and 8,500 each of the other two booklets.