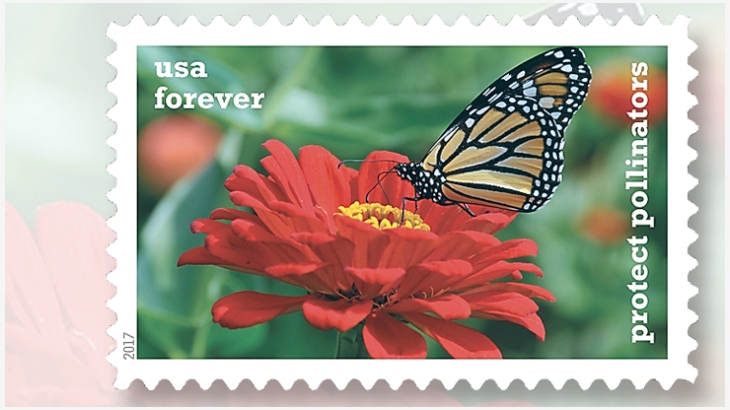 A monarch butterfly is shown upon a red zinnia on this United States forever stamp to be issued Aug. 3 in a set of five. 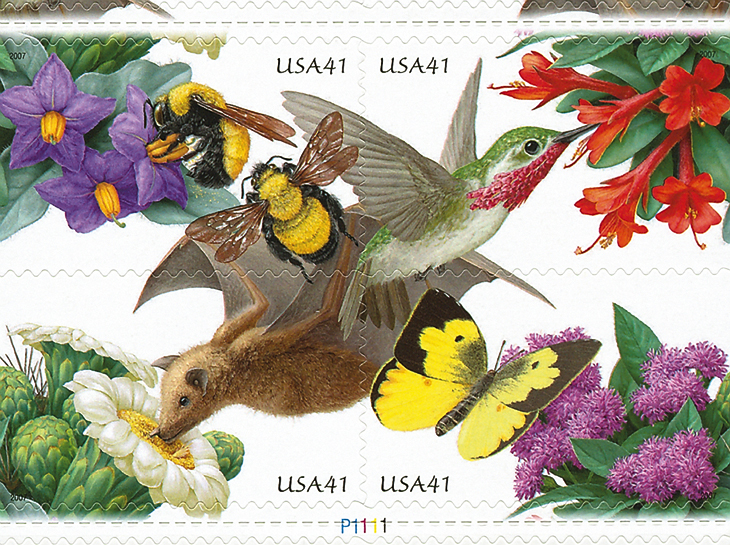 The U.S. Postal Service previously addressed the subject of pollination 10 years ago, with a set of four 41¢ stamps showing four different creatures involved in the pollination cycle. 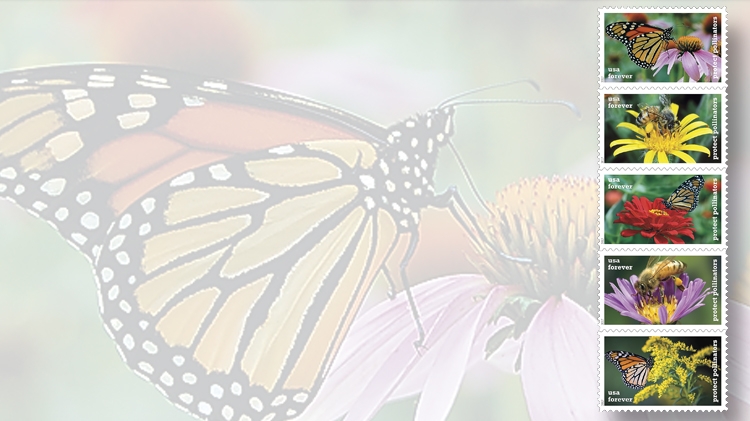 Each stamp in the Protect Pollinators set pictures either a monarch butterfly or a Western honeybee on a colorful flower. The five forever stamps are being issued in a pane of 20.
Previous
Next

The United States Postal Service is issuing a set of five nondenominated (49¢) forever stamps with the theme “Protect Pollinators.”

The self-adhesive stamps will be issued Aug. 3 in a pane of 20, with four stamps of each design.

The individual stamps in the set picture either a Western honeybee or a monarch butterfly, “each shown industriously pollinating a variety of plants native to North America,” according to the Postal Service.

The vignette for each horizontal stamp is an existing photograph selected by USPS art director Derry Noyes.

A different photograph by Fowler of the monarch on a goldenrod is shown in the top selvage on the pane, which also is inscribed “Protect Pollinators,” as is each stamp in the set.

The stamps were offset-printed by Ashton Potter USA Ltd. in Williamsville, N.Y.

A first-day ceremony will take place Thursday in Richmond, Va., at the site of the 2017 American Philatelic Society Stampshow.

The ceremony will begin at noon on the show floor at the Greater Richmond Convention Center at 403 N. Third St.

Admission to the stamp show and the first-day ceremony are free and open to all.

The Protect Pollinators stamp set is the second set with the same theme issued during the past 10 years.

On June 29, 2007, the Postal Service issued a set of four 41¢ stamps designed by Steve Buchanan and featuring four creatures in the act of pollination: Morrison’s bumblebee, a calliope hummingbird, a lesser long-nosed bat, and a Southern dogface butterfly (Scott 4153-4156).

The 2007 and 2017 sets both appeal to popular demand from the mailing public for colorful first-class letter-rate stamps that feature floral or nature themes.

In less than two weeks, the Postal Service will follow up with another floral set: the Flowers from the Garden set of four forever stamps will be issued Aug. 16 in a double-sided pane of 20.

According to the U.S. Department of Agriculture, “Pollination is the act of transferring pollen grains from the male anther of a flower to the female stigma. The goal of every living organism, including plants, is to create offspring for the next generation.”

“Pollination is usually the unintended consequence of an animal’s activity on a flower. The pollinator is often eating or collecting pollen for its protein and other nutritional characteristics or it is sipping nectar from the flower when pollen grains attach themselves to the animal’s body. When the animal visits another flower for the same reason, pollen can fall off onto the flower’s stigma and may result in successful reproduction of the flower.”

Interest in protecting pollinators has been intensifying because scientists are taking note of significant population declines among some of the most common natural pollinators.

“Crop pollination by insects contributes some $15 billion of produce to the U.S. economy each year,” the Postal Service said.

“Trending declines in their populations alert us that pollinators now need mindful human intervention in order to thrive. Individuals can help butterflies, bees and other pollinators by planting pollinator gardens that include native flowers or heirloom varieties of fruits and vegetables.”

Populations of the monarch butterfly have fallen by approximately 90 percent in just the last two decades according to the National Wildlife Federation, citing a 2017 World Wildlife Fund study that points to a 27 percent population decrease from the previous year.

Bee populations have been similarly struggling. Reports of a “colony collapse disorder” circulated in 2006, and scientists have been sounding alarms about the disappearance of bee populations in the intervening years. Pesticides and poor nutrition have been cited as two possible causes for the declines.

The USDA Bee Research Laboratory in Beltsville, Md., is one agency that is working toward rebuilding healthy bee populations.

The Postal Service has printed an undisclosed quantity of 180-stamp press sheets for the Protect Pollinators set, consisting of nine unsevered stamp panes. The sheets are sold at face value for $88.20.

For a digital color postmark on its uncacheted first-day covers, the Postal Service developed a design with the text “Protect Pollinators” in green, beneath an arch of goldenrods and monarch butterflies.

Technical details and first-day cancel ordering information for the Protect Pollinators forever stamps can be found below.

Standard ordering instructions apply. Collectors requesting first-day cancels are encouraged to purchase their own stamps and affix them to envelopes. The first-day cover envelopes should be addressed for return (a removable label may be used), and mailed in a larger envelope addressed to FDOI-Protect Pollinators Stamps, USPS Stamp Fulfillment Services, 8300 NE Underground Drive, Suite 300, Kansas City, MO 64144-9900.

Requests for first-day cancels must be postmarked by Oct. 3.