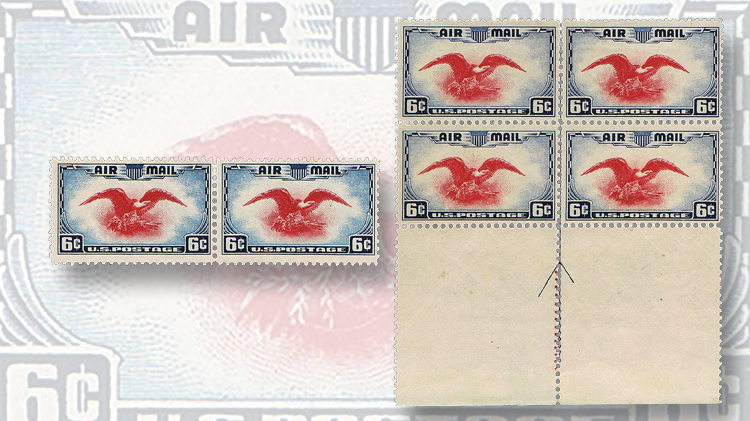 The block of four 1938 6¢ Eagle airmail stamp is Scott C23c, which the catalog describes as “ultramarine and carmine.” The normal C23, shown above the block, is “dark blue and carmine.”

In the U.S. Stamp Notes column in the May 15 Linn’s, I looked at the block of the 1938 6¢ Eagle airmail stamps that is shown here in the first illustration, and discussed this “ultramarine” color variety (Scott C23c) that the 2017 Scott Specialized Catalogue of United States Stamps and Covers lists at $160 for a mint single and $1,500 for a used example.

I was less than positive about whether this is a genuine variety worthy of a color error listing. While not dismissing it entirely, I also did not buy into the rather sketchy stories that had been advanced by philatelic authors of the 1940s.

Scott describes the color of the normal version of this 6¢ airmail stamp (Scott C23) as dark blue. A pair of these stamps is shown with the C23c block.

The evidence I had when I wrote the May 15 column did not entirely agree on who and how the discovery of the ultramarine color was made or the numbers that might exist. Also, there was more than a hint of some market manipulation that occurred early on, and maybe some pay for play or other shenanigans involved in how the variety came to be listed in the catalog.

In addition, I had no reliable scientific readings to verify that this is a variety, and I had a handful of used examples of the stamp that mimic the ultramarine pretty closely.

Indeed there is quite a range of the blue color available in any accumulation of Scott C23. This is probably due to the normal variations seen in wet paper printing, wiping variations and thus inking application flaws, oxidizing, and changes due to the chemical content of water or paper when used stamps were washed from envelopes.

In any case, I was not convinced that C23c was a real error. But thanks to Linn’s reader James Patterson, I am now a believer.

The foremost expert in color varieties on United States stamps from 1847 into the 1940s was R.H. White. His five-volume Encyclopedia of the Colors of United States Postage Stamps, published in the early 1980s, is one of the seminal works in all of U.S. philatelic literature and a go-to reference that I use frequently.

A companion volume, The Papers and Gums of United States Postage Stamps 1847-1909, that was published in 1983.

White departed from his focus on the stamps of the 1840s through 1922, to include an essay on the “Two Dollar, Three Cent Victory, and Six Cent 1918-1939 Issues” at the end of Vol. 4. Encyclopedia of the Colors of United States Postage Stamps. Apparently, I had forgotten all about this essay.

Because it is scholarship at its finest, is conclusive about the existence of Scott C23c and allows us to put this question to bed, I will quote White’s analysis in some detail:

“During the past forty years a number of articles or editorial pieces have appeared in philatelic publications presenting the pros and cons on the subject of the blue and carmine normal printings versus the ultramarine and carmine specimens which have been reported.

“The genesis of the story of this stamp has its tragi-comedy aspects when one reads through the literature. As pointless as the continuing debate seems to be, there are some scientific facts which all concerned should consider carefully before offering more opinions on the subject.

“[Viewing my color plate and] Using the nearly solid but finely lined section of the shield medallion at the top as a target, a quick alternation of focus between this area on each stamp reveals a difference in color. The medallion on the blue version is characteristically less red than that on the stamp purported to be ultramarine. The curved ornament designs directly above the numeral 6 also shows this difference in color; the right-hand ‘blue’ is virtually free of the reddish hue present on the ultramarine example.

“ … However, in the case of these two stamps, an 8x magnification clearly reveals the C23 to be bluer (less purple) than the specimen identified as C23c. Brighter ultramarine examples of C23c have been reported.

“Because an unequal degree of inking or a slight discoloration of the paper on the C23c exists, a non-destructive ink analysis was performed. The results are conclusive, if alarming, to those who have had serious doubts about the possible differences between the blue and ultramarine printings. Both stamps have been printed with similar inks of varying composition. The colorant of the normal stamp is a mixture of two pigments, one classified as a mineral blue, the other a mineral ultramarine.

“The C23c specimen is also printed with ultramarine and blue colorants, but there is approximately 30% less mineral blue present. The mineral, a blue iron compound, is quite similar to the blue colorant used in some of the earliest U.S. issues and is found in most blue stamps.

“ … Numerous articles on the C23 airmail have appeared in philatelic journals, magazines, and newspapers since its issuance in 1938. Most have revolved around the controversy over the existence of the ultramarine shade. The unfortunate aspect of most of the debate relates not to the facts concerning the ink composition but to the difficulty some individuals have with shades of ultramarine. It has been noted previously that ultramarine blues are ‘redder’ than iron blues.

“When both colorants are used to affect a certain type of ‘blue’ color, the problem is intensified. None of the C23’s examined is completely free of the ultramarine pigment. Whether intentional or not, the two stamps are appreciably different, both chemically and spectrophotometrically. One can be easily be distinguished from the other, if not by the color perception acuity of the collector, then by readily available color analysis services. “

Bottom line: Scott C23c exists and deserves to be listed as an error. Examples must be expertized.