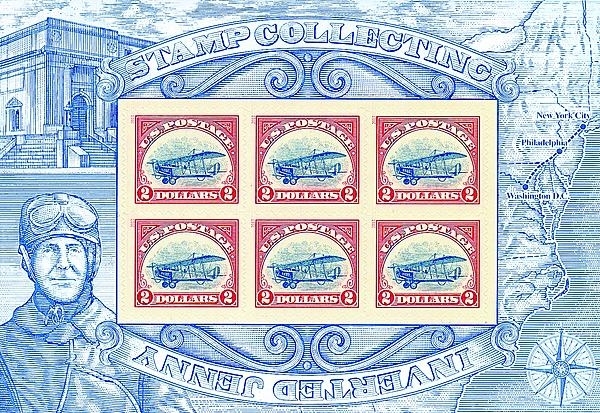 A stamp collector told Linn's Stamp News that he bought a pane of the upright $2 Jenny Invert stamp variety in a Marcy, N.Y., post office.

A stamp collector reports that he purchased one of the scarce upright $2 Jenny Invert panes in a post office in Marcy, N.Y.

The purchase was made in early April by Joe Kalynycz, who describes himself as a “pretty avid stamp collector.”

As a promotional scheme, the Postal Service intentionally created 100 panes of an upright variety of the $2 stamp. Like the millions of normal $2 stamps that show the plane flying upside down, these rare variety panes, which show the plane flying upright, are hidden within sealed blind packaging which, from the outside, cannot be distinguished from the regular issue.

The variety panes were then mixed in with the normal stamps. Stamp customers who come upon the variety in their purchases have found they can make a substantial profit selling the pane at auction or to a stamp dealer or collector.

The 100 upright variety panes were packaged with a card printed with a phone number the finder could call to receive a certificate signed by the U.S. postmaster general, and to register the purchase and discovery.

In response to an inquiry from Linn’s Stamp News, the Postal Service revealed in mid-June that it has now received 32 calls from finders of the rare variety.

Figures released by the Postal Service in November 2016 indicated that roughly 75 percent of the 2.2 million-pane print run had been sold, but only 30 percent of the 100 panes of the upright variety had been reported.

It is likely that some finders of the upright variety have chosen not to report their find to the Postal Service or to Linn’s Stamp News.

Postal Service spokesman Mark Saunders told Linn’s last fall, “Keep in mind, we only know what has been reported/registered.”

The number of $2 Jenny Invert stamp panes available for purchase continues to dwindle, as does the number of post offices where they can be purchased.

The stamp was taken off sale at USPS Stamp Fulfillment Services because of dwindling inventory (Linn’s, Nov. 28, 2016, page 10), but some post offices still have limited quantities available.

Kalynycz told Linn’s that he plans to keep his recent find in his collection for now.

He said he purchased quite a few panes before finding the upright variety, and used many of the normal $2 stamps for postage, keeping a few of the better quality regular-issue stamps for his collection.

He added that he got a nice round of congratulations on his find from other members of his local stamp club.

Can you still buy the $2 Jenny Invert stamp?

The $2 Jenny Invert stamp issued in 2013 was taken off sale at USPS Stamp Fulfillment Services in November 2016 because of declining stocks. It officially remains on sale at post offices, but many post offices have sold out of the limited stock they originally had on hand.

A philatelic office at the Los Angeles main post office reported in mid-June that it has a few hundred panes of six left, “still sealed.”

Collectors unable to find the panes locally can call the Los Angeles office at 323-586-1476 and ask for Brenda Coronado, or e-mail brenda.l.coronado@usps.gov to confirm availability before ordering. The stamps are $12 for a pane of six $2 stamps.

When payment is received the stamps are sent by priority mail with tracking for domestic orders.