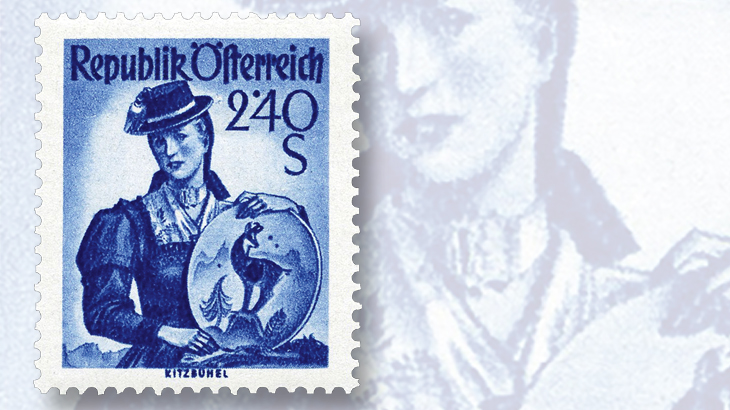 Issued Nov. 26, 1951, this 2.40-schilling stamp from Austria’s post-World War II- Costumes series (Scott 548) was the first to show the name, craftwork and traditional attire of Kitzbuehel, a small winter resort town in the western Austrian province of Ty

Are you ready for the weekend? Linn’s editors certainly are, following a busy week of philatelic reporting. The presses, however, are coming on line to print the July 17 issue of Linn’s Stamp News that goes in the mail Monday, July 3, to subscribers. Here we serve up a few teasers of exclusive content to pique your philatelic curiosity.

Austria’s Costumes stamps of 1948-59 feature slice-of-life portraits of women dressed in traditional costumes of different Austrian regions, valleys, forests and cities. As Fred Baumann reports in the Spotlight on Philately column, the basic series is well within the reach of most collectors. For those who want to specialize, there are almost endless varieties to be found.

Kingdom of Sardinia: the stamps of King Victor Emanuel II

Amid cries of treason, Sardinia followed the “avenues of progress” and issued stamps. With the prime minister at the helm, the commission set postal rates and adopted stamp concepts. Sergio Sismondo tells of the turmoil and struggles behind the issuance of Sardinia's first stamps in the Unveiling Classic Stamps column. This month’s column is part 2 of the story that began in the June 19 issue of Linn’s.

Now obscure in the annals of flight, Lithuanian-American Felix Waitkus made it from New York to Ireland, while hoping to get to Lithuania. The flight was honored on Lithuania’s last airmail stamps. In the Classic Stamps of the World column, Kathleen Wunderly describes the circumstances surrounding this flight, which was cut short due to inclement weather.